by Donna Quesada: If you look at statues of Indian deities, or the Buddha, you’ll see their hands and fingers deliberately positioned into mudras… 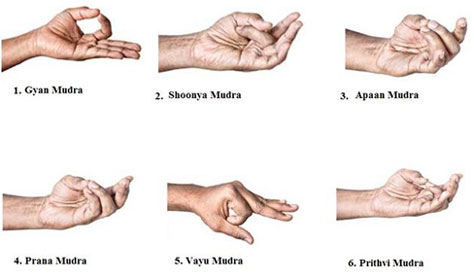 Variously translated as lock, or seal, through these various hand positions, we are sealing and directing the brain’s impulses and energy flow in specific ways, in order to positively affect our mind and emotions. Think of the fingers as special conduits of divine energy.  Like a wire-board in which different combinations of electrical connections create different effects, mudras are hand gestures, each of which affects the brain differently according to how the fingers are positioned.

There is an indelible connection between the hands and the brain. One of the most startling examples of this relationship was found in the case of pianists, whose fingers become neurologically fused through years of practicing arpeggios. Because the fingers hit the keys in such close succession, in exactly the same way, repeatedly, the brain begins to treat the two fingers as if they were one and eventually the musician becomes unable to move the two fingers separately.[1]

It is an example of neuroplasticity—the ability of the brain to rework the way it functions. One of the most powerful means of stimulating this change is through meditation. It is now known that mudra is a powerful modality, which, in accompaniment with meditation in its various forms, enhances the brain’s capacity to rewire its habitual tendencies. The National Institute of Mental Health recently confirmed the power of mudras to restore neuronal connections in the brain. In Meditation as Medicine, Dr. Dharma Singh Khalsa gives further commentary on this ability of mudras, most notably on their capacity to improve motor coordination and cognitive ability in those suffering from various stages of Alzheimer’s disease.

It is through the tremendous flow of energy in our hands, that healers, in traditions like Reiki, are able to restore vitality by uncovering blockages and facilitating flow where it is needed. Through this power, we can tap into our own healing power within.

As one of the elements of a Kriya, or modality of practice, mudras enable us to get through to the mind by working with our bodies. Through continued conscious practice, things begin to look differently from the inside out and correspondingly, what we then see as choices expands. It’s like looking from the top of the mountain. It enlarges our perspective, enabling us to see what we simply couldn’t see before. It soon becomes impossible to revert back to the old way of seeing. And we suddenly have alternatives that eluded us before, enabling us to move on, leave old habits behind, while consciously choosing our path with a deep inner sense of knowing.

“I could actually feel the energy flowing between my fingers.”

How to do it

In the quote above, a student of mine was describing the effects of the ancient Ganpati Kriya Meditation, known for its powerful ability to help us clear subconscious blocks and start anew.

Chant the entire mantra on a single breath, as you press each finger tip to the thumb, sequentially, on both hands simultaneously, with each syllable. So, because there are three sets of four syllables, the thumb will make its rounds three times, touching the index finger, the middle finger, the ring finger and then little finger, for a total of 12 firm taps.) Use a monotone voice. Start by doing this for three minutes and then work up to 11 minutes.

Inhale deeply and hold the breath. Move the body in a slow twist and stretch motion, moving each muscle of the body. Then exhale powerfully. Repeat this 5 times.

Immediately sit straight. Gaze at the tip of the nose. Enter into a state of absolute calmness. Sit in this meditative stillness for 3 minutes.

To End: Inhale and hold the breath for 30 seconds as you physically move and rotate your body as if it is going through spasms. Stretch and squeeze every muscle in the body. Exhale. Repeat this 3 more times. Then inhale, sit calmly, while maintaining your gaze at the tip of your nose for 20 seconds. Exhale and relax. By breathing and moving in this way, you have moved energy through the meridians of your body. Can you feel it?

Each finger corresponds to a planetary energy and evokes its special quality. As you tap each finger to the thumb, exert just enough pressure to feel the flow of energy through the nadis, or, energy meridians.

This meditation is named after the Hindu God, Ganesha. Ganpati, another name for the fearless elephant-headed deity, is known for making the impossible possible. Riding around on his little rat, he enters any door, no matter how small, overcoming all obstacles along the way.

We too, can begin to see our way through any block. As we begin to gain trust in ourselves, we become empowered. This is the key to a life of contentment. No longer stymied by our own imagined limitations, those old insecurities can no longer take root in our psyches. Like that mountain top, they simply don’t thrive up there in that rarified air!