When Does A Pandemic Become Endemic – And What Is The Difference? 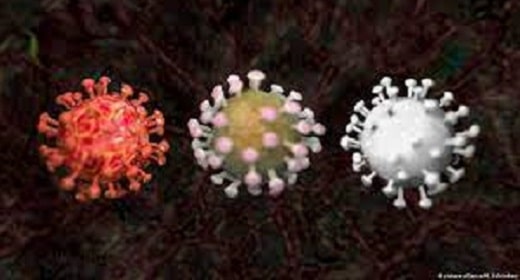 Though omicron is infecting a record number of people around the world, for those who’ve been vaccinated against COVID-19 and received a booster shot, a bout with the variant is likely to feel like an ordinary cold.

This could be a promising development in the pandemic’s trajectory.

“When we look back 10 years from now, I think the emergence of omicron will be considered a hallmark event, because it really brings the light at the end of the tunnel,” says UCLA Health clinical microbiologist Shangxin Yang, PhD. “We potentially can see how the pandemic might end and become endemic.”

The World Health Organization declared COVID-19 a pandemic — an illness that spreads exponentially — in March of 2020. The virus known as SARS-CoV-2 spread from Wuhan, China, across the globe within months, killing more than 5.5 million people to date.

An endemic disease, on the other hand, is one with more predictable rates of circulation, according to Mike Ryan, MD, executive director of the WHO Health Emergencies Program. Colds and flu, for instance, are endemic, circulating every winter.

But given the high levels of transmissibility of SARS-CoV-2, the virus that causes COVID-19, some experts consider COVID to be endemic already.

“This virus is so well adapted for human-to-human transmission that it’s going to be very difficult, if not impossible, to ever get rid of it completely,” says epidemiologist Timothy Brewer, MD, MPH, noting diseases that aren’t eradicated are, by definition, endemic.

Regardless of how you classify it, COVID-19 isn’t going away.

Dr. Yang points to the swine flu pandemic as an example of one disease’s trajectory from pandemic to endemic.

When the swine flu emerged in 2009, no one had immunity to it. The disease was a version of the H1N1 influenza virus — the same one that caused the 1918 flu pandemic — that hopped from people to pigs and and birds and back again, with multiple viral genome reassortment along the way. By the time it began spreading among the human population in spring of 2009, the virus had elements that originated from people, pigs and birds in it, Dr. Yang says, “reassembled to create a brand-new virus.”

Like COVID-19, the disease spread quickly across the globe and struck in waves similar to the surges we’ve experienced over the past two years.

Scientists were able to develop a vaccine against swine flu very quickly, Dr. Yang says, relying on a well-established annual vaccination program against influenza. Plus, swine flu wasn’t as deadly as COVID, so there were plenty of survivors who developed natural immunity.

“By winter of 2009, most people were either infected or vaccinated, so that you quickly had herd immunity across the globe,” Dr. Yang says, meaning enough people had been exposed to the virus that they acquired some protection against severe illness. “Therefore, by August of 2010 — basically a little bit over a year — the pandemic ended. But the virus didn’t go away. The virus became endemic. It basically just became a new seasonal flu.”

Another possibility is that COVID-19 could follow a trajectory more like the HIV pandemic, suggests Dr. Brewer. HIV is just as deadly and no less contagious today than it was when it emerged 40 years ago, but treatment and prevention for the disease have improved dramatically.

“There’s nothing to say that SARS-CoV-2 has to become less pathogenic to become endemic,” Dr. Brewer says. “What determines whether or not it’s going to be endemic is how well it spreads from person to person, and it does that very well.”

The future of COVID-19

The expeditious spread of the omicron variant — more than 700,000 new cases every day in the U.S. during the winter 2022 surge — means many, many more people will acquire some level of immunity to COVID-19. Omicron is still deadly in certain populations, including unvaccinated or immunocompromised individuals, but hospitalization and death rates have declined compared with previous variants of the virus.

But does this mean COVID is now endemic, or is this a step in that direction?

“I think after this surge, most people on Earth would either be vaccinated or infected. Therefore, the whole global population would gain herd immunity,” Dr. Yang says, “which would make the SARS-CoV-2 virus become endemic.”

Dr. Yang envisions a future where SARS-CoV-2 might behave like the flu or the common cold — a seasonal illness that’s more of a nuisance rather than a life-threatening condition. The season flu, however, remains life-threatening to some, leading to tens of thousands of deaths annually in the U.S.

The increased immunity against COVID-19 provided by vaccines, boosters and the widespread omicron variant could slow the appearance of future variants, Dr. Brewer says.

“As immunity rises in the population, case numbers will begin to fall because there’ll be fewer and fewer susceptible individuals for that particular variant to infect,” he says.

The eventual decline in COVID-19 case numbers, combined with new medications — including antiviral pills recently authorized by the U.S. Food and Drug Administration — and expertise in treating the virus gained over the course of the coronavirus pandemic could enable health care systems to better accommodate people who do become infected.

Any future variant would have to be more transmissible or more evasive of our current immunity — or both — to supplant omicron, Dr. Brewer says, adding that each new variant needs to displace the previous one to take hold.

But it’s important to note that transmissibility (how easily the virus spreads), immune escape (how well it evades protection from vaccination or previous infection) and pathogenicity (severity of disease) are independent properties.

“You can have a variant that has immune escape that is more pathogenic or less pathogenic,” Dr. Brewer says. Omicron, he notes, was more contagious and more evasive of immunity than its predecessor, the delta variant, but less pathogenic.

One big question mark is the role animals might play in the evolution of future variants, adds Dr. Yang.

“It’s unclear yet whether SARS-CoV-2 has a large animal reservoir and that animal strain of the virus could spill back to humans and cause kind of a continuous pandemic,” he says. “That’s yet to be determined.”

For example, COVID-19 spread rapidly among farmed mink in many parts of Europe in 2020 and the variant was able to infect people as well. A more recent study found the virus spread easily among white-tail deer in Ohio, but didn’t transmit back to humans.

“The zoonotic reservoir is an unpredictable factor in this equation,” Dr. Yang says.

The most recent flu pandemics, including swine flu, were created by the virus mutating in animals and then infecting people.

“From a more optimistic standpoint, we are hoping that omicron will be the last major variant that could end the pandemic,” Dr. Yang says. “Obviously, we need time to see that.”

If omicron is, indeed, the last variant in SARS-CoV-2’s trajectory, it would “join the long list of human pathogens” and cause seasonal illness similar to the cold symptoms caused by other regularly circulating coronaviruses, he says.

“That’s kind of how I see it ending,” Dr. Yang says. “I’m hoping that very likely this will end this year, presumably summer. But we’ll see.”