How Covid Has Reshaped The Food Chain

by James Wong: Covid-19 has highlighted the pressures on farmers and distributors to meet ‘just in time’ deliveries. James Wong looks at how the food chain is adapting to the pandemic… 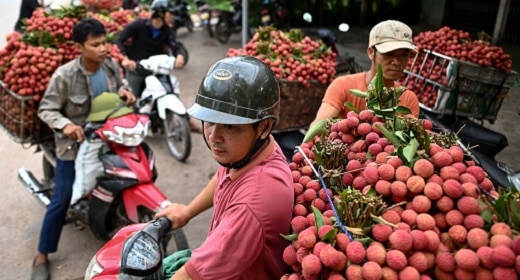 Some images of the Covid-19 pandemic will last generations – deserted city streets, football games played in empty stadia or world leaders in face masks. For many of us, the most vivid memories may be a little closer to home: queues at the shops, talking to loved ones on mobile screens and bare aisles in the supermarket.

I live in the UK where in the early days of the pandemic, grocery store shelves emptied long before we were told to stop going to the pub, schools closed and face masks became mandatory. The severity of what was approaching only hit home for some people when the rice and pasta ran out.

Other people around the world were far less fortunate than I was. In Africa, 73 million people across 36 countries are deemed acutely food-insecure as a result of Covid-19 by the World Food Programme, compared to half a million in Europe. The Democratic Republic of the Congo – already dealing with the effects of ongoing Ebola outbreaks – and South Sudan were among the worst affected by this sudden change in food supply.

Farmers in Africa have struggled to get hold of seeds, while in the US huge numbers of livestock were culled because of difficulty getting to abattoirs, and milk was poured down the drain. The pandemic has highlighted how fragile our food chain – from field to fork – really is.

But have we learned anything from the experience about food security? And how might we be better prepared next time?

I spoke to Riaz Bhunnoo, the director of the UK’s global food security programme, who says that in that country at least, the food system responded fairly well despite the headlines. Empty shelves were the result of logistics issues which quickly sorted themselves out, rather than actual shortages. 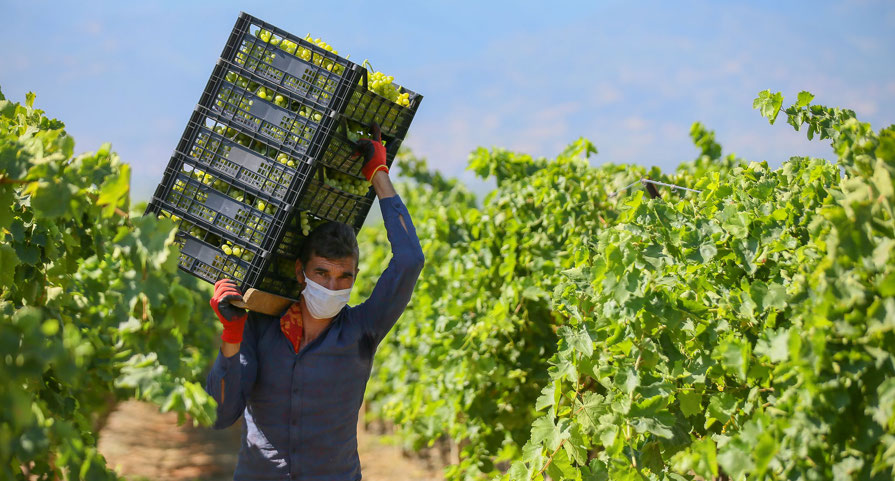 In many countries, migrant workers in the food industry were exempt from lockdown rules (Credit: Getty Images)

In Europe, asparagus was the canary in the coal mine. Widespread lockdowns and restrictions on movement across international borders meant big challenges for the usual army of seasonal workers who travel to pick, sort and pack fresh produce on farms across Europe. The UK, for example, relies upon at least 75,000 temporary agricultural workers, the bulk of whom come from elsewhere in the European Union. Hundreds of thousands more – many from outside the EU – are brought in to work in fields and vineyards in Italy, Spain, Germany and France. Farmers were desperate for local workers to replace the migrant labour gap – overall there was an estimated shortfall of more than one million seasonal agricultural workers in Europe.

The asparagus harvest is early in the season – around May – before many other vegetables. Without people to pick them, the delicate vegetables risked rotting in the fields.

Similar issues were experienced around the world. In Australia nearly half of the workforce on vegetable farms are temporary migrants and in the US, 10% are, according to the United Nation’s Food and Agricultural Organization. Canadian farms rely upon more than 60,000 migrant workers. In Brazil, farmers struggled with the coffee crop; in India, large seasonal workforces that move around within the country were unavailable due to the lockdown.

Manuwant Choudhary, a farmer from Samastipur in eastern India, says he was particularly hurt by the lockdown initially because his migrant labourers were not given dispensation to travel from Punjab for work. At one time, he had 20 acres of land ready to harvest on his small family farm, but no one to harvest it.

“But then I can’t even blame their absence for my plight,” says Choudhary. “Even if I had managed to harvest, I would have to store the grain until the lockdown was lifted. Transport is shut and the flour mills are closed.”

“For four days after the lockdown – until the end of March – I was able to send 50kg of brinjal (aubergine) to the market, using local labour,” he says. “But as the coronavirus fears spread, they stopped coming.”

Choudhary also had to compete with other employers for migrant labour. Usually a migrant farmer works the harvest season in the country before returning to cities to take up other seasonal work. Many were choosing just to stay in the cities. 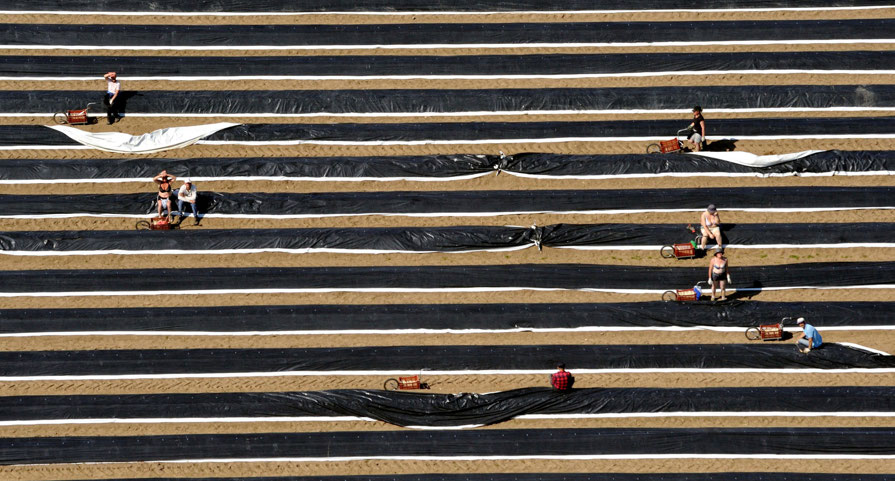 Asparagus pickers were hard to find in Germany, even after public campaigns (Credit: Getty Images)

To help the agricultural industry cope, governments were forced to step in – launching ambitious recruitment drives to find “agricultural armies” from within their own borders, or even flying in groups of workers from abroad who were afforded special rights.

But even in countries like Germany they had a real issue with getting migrant labour in, says Katy Askew, the editor of Food Navigator magazine. The European Commission made some provisions to try to keep the flow of labour moving. But these more affluent countries, she says, might choose to step up their reliance on mechanisation in future.

In New Zealand, engineers have been developing automated robots that might be able to take on some of the most repetitive and arduous parts of harvesting. Robotics Plus has built a prototype robot that can trundle through kiwi-fruit orchards while reaching up with its octopus-like arms to pluck the fruit from the canopy above and sort them by size. The company founder, Steven Saunders, has been testing the robots in his own kiwi-fruit orchard.

“The robots can pick 24 hours a day, if needed,” says Saunders. “It means human workers can be deployed elsewhere, which really helps with productivity.”

He and his team are also developing robots capable of harvesting other crops, such as asparagus. “The trouble is that there is no universal way of harvesting fruit and vegetables,” says Saunders. “You need a bespoke picker for each crop – the way you pick an apple versus a strawberry or a blueberry is totally different.” (Read more about the robots that can pick kiwi-fruit.)

Elsewhere, other companies are working on their own solutions. Florida-based Harvest Crop Robotics, for example, is working on machines that can automatically harvest strawberries while researchers at the University of Cambridge have built a robot for picking lettuce.

But robotised agriculture is likely to be limited to only the wealthiest farmers while costs are so high. “The big barrier to the adoption of ag tech is of course farmers’ ability to invest, because farmers operate on really thin margins, so when you’re talking about the huge in advance capital expenditures, it’s going to be a huge challenge,” says Askew.

We have also seen the difficulty of working under social distancing restrictions in the meat sector. Covid cases in meat processing plants have been high. These workplaces are incredibly hygienic but it’s thought that the loud noise in the plants forces workers to shout, expelling more viral particles. It’s also very difficult to do this job without being close to other people.

Most food, around 90%, stays within the borders of the country or continent in which it is grown. But this doesn’t make it exempt from shortages. Much of the food chain relies on “just in time” systems – which is really just a way to stop the need for large warehouses packed full of goods. As with the flour shortage in my local supermarket, there was enough food – it just wasn’t in the right place. Food chains are highly precise networks that rely on getting products to stores with the minimum amount of delay. This keeps food fresh and means it is left sitting on shelves as little as possible. (Read more about how coronavirus is changing grocery shopping.)

Urban farmers and local producers have proven their worth in lockdown. Some are using issues with the supply chain as evidence that the system is broken and that we should be buying hyper-local from micro producers. While there is certainly a need to reduce the footprint of the food we eat, some innovators are proving that you can be local and large. Underground farming shows there is space in big cities to farm at scale if you know the right places to look. What we should be doing is making better use of the land available. 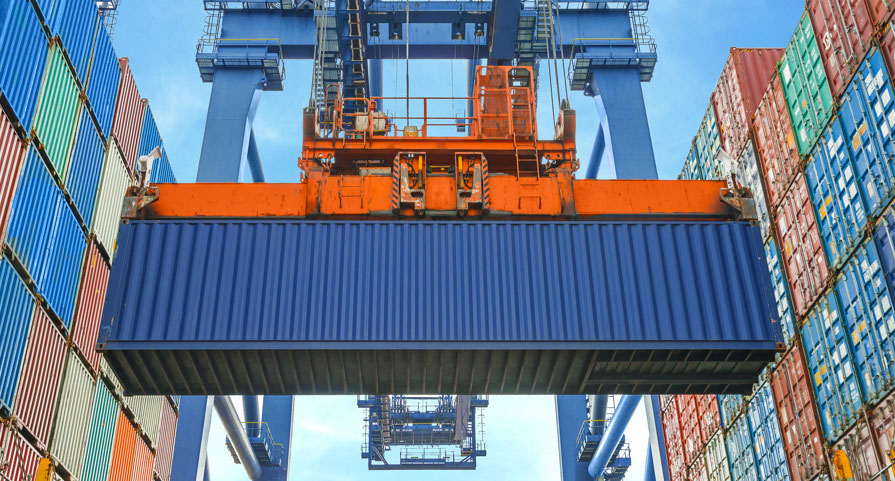 And speaking of space, satellite technology has a place in the supply network, too. Using images from space we can measure the nutrient content of land either to identify new areas in which to farm more efficiently or react to deficiencies in farmland to treat the soil quickly.
The most vulnerable people will of course have felt the worst impacts of errors in the supply chain. But Bhunnoo is optimistic that the pandemic could be a rare chance for change by thinking about how we make the food system not just more resilient, but healthier and more sustainable. “The pandemic’s given us a real opportunity to build back better,” he says.
For me, one of the most frustrating faults in the food chain is the amount we lose in household waste. Of all the food thrown away, 70% could have been eaten and around 40% of all food goes to waste somewhere along the chain. It’s no good refining the process of getting food to our plates if we throw so much of it away in the end. To be more sustainable, we need to make the most of everything we produce – especially while one in nine people in the world go hungry. (Read more about how to avoid throwing good food away.)
US company Apeel has come up with a way that will prolong the shelf life of fresh fruit and vegetables, meaning less food waste. Apeel studied the properties of fruit peels to produce a colourless and tasteless coating that can be applied to fruit and vegetables and dramatically increase their lifespan. It is even made from plant constituents like skins and pips that are frequently discarded during processing.
Whether it’s robot fruit pickers, space scientists or underground farms, Covid-19 has taught us that where there are crises there are also opportunities. Food supply chains have existed for millennia, but they are now getting a very modern makeover.