What God, Quantum Mechanics And Consciousness Have In Common

by John Horgan: Theories that try to explain these big metaphysical mysteries fall short, making agnosticism the only sensible stance… 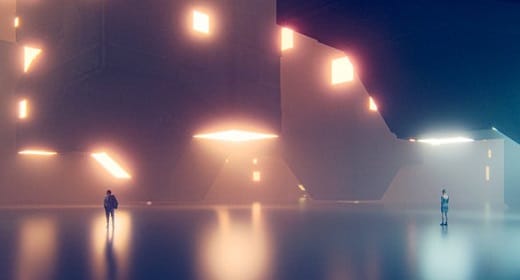 In my 20s, I had a friend who was brilliant, charming, Ivy-educated and rich, heir to a family fortune. I’ll call him Gallagher. He could do anything he wanted. He experimented, dabbling in neuroscience, law, philosophy and other fields. But he was so critical, so picky, that he never settled on a career. Nothing was good enough for him. He never found love for the same reason. He also disparaged his friends’ choices, so much so that he alienated us. He ended up bitter and alone. At least that’s my guess. I haven’t spoken to Gallagher in decades.

There is such a thing as being too picky, especially when it comes to things like work, love and nourishment (even the pickiest eater has to eat something). That’s the lesson I gleaned from Gallagher. But when it comes to answers to big mysteries, most of us aren’t picky enough. We settle on answers for bad reasons, for example, because our parents, priests or professors believe it. We think we need to believe something, but actually we don’t. We can, and should, decide that no answers are good enough. We should be agnostics.

Some people confuse agnosticism (not knowing) with apathy (not caring). Take Francis Collins, a geneticist who directs the National Institutes of Health. He is a devout Christian, who believes that Jesus performed miracles, died for our sins and rose from the dead. In his 2006 bestseller The Language of God, Collins calls agnosticism a “cop-out.” When I interviewed him, I told him I am an agnostic and objected to “cop-out.”

Collins apologized. “That was a put-down that should not apply to earnest agnostics who have considered the evidence and still don’t find an answer,” he said. “I was reacting to the agnosticism I see in the scientific community, which has not been arrived at by a careful examination of the evidence.” I have examined the evidence for Christianity, and I find it unconvincing. I’m not convinced by any scientific creation stories, either, such as those that depict our cosmos as a bubble in an oceanic “multiverse.”

People I admire fault me for being too skeptical. One is the late religious philosopher Huston Smith, who called me “convictionally impaired.” Another is megapundit Robert Wright, an old friend, with whom I’ve often argued about evolutionary psychology and Buddhism. Wright once asked me in exasperation, “Don’t you believe anything?” Actually, I believe lots of things, for example, that war is bad and should be abolished.

But when it comes to theories about ultimate reality, I’m with Voltaire. “Doubt is not a pleasant condition,” Voltaire said, “but certainty is an absurd one.” Doubt protects us from dogmatism, which can easily morph into fanaticism and what William James calls a “premature closing of our accounts with reality.” Below I defend agnosticism as a stance toward the existence of God, interpretations of quantum mechanics and theories of consciousness. When considering alleged answers to these three riddles, we should be as picky as my old friend Gallagher.

THE PROBLEM OF EVIL

Why do we exist? The answer, according to the major monotheistic religions, including the Catholic faith in which I was raised, is that an all-powerful, supernatural entity created us. This deity loves us, as a human father loves his children, and wants us to behave in a certain way. If we’re good, He’ll reward us. If we’re bad, He’ll punish us. (I use the pronoun “He” because most scriptures describe God as male.)

My main objection to this explanation of reality is the problem of evil. A casual glance at human history, and at the world today, reveals enormous suffering and injustice. If God loves us and is omnipotent, why is life so horrific for so many people? A standard response to this question is that God gave us free will; we can choose to be bad as well as good.

The late, great physicist Steven Weinberg, an atheist, who died in July, slaps down the free will argument in his book Dreams of a Final Theory. Noting that Nazis killed many of his relatives in the Holocaust, Weinberg asks: Did millions of Jews have to die so the Nazis could exercise their free will? That doesn’t seem fair. And what about kids who get cancer? Are we supposed to think that cancer cells have free will?

On the other hand, life isn’t always hellish. We experience love, friendship, adventure and heartbreaking beauty. Could all this really come from random collisions of particles? Even Weinberg concedes that life sometimes seems “more beautiful than strictly necessary.” If the problem of evil prevents me from believing in a loving God, then the problem of beauty keeps me from being an atheist like Weinberg. Hence, agnosticism.

THE PROBLEM OF INFORMATION

Quantum mechanics is science’s most precise, powerful theory of reality. It has predicted countless experiments, spawned countless applications. The trouble is, physicists and philosophers disagree over what it means, that is, what it says about how the world works. Many physicists—most, probably—adhere to the Copenhagen interpretation, advanced by Danish physicist Niels Bohr. But that is a kind of anti-interpretation, which says physicists should not try to make sense of quantum mechanics; they should “shut up and calculate,” as physicist David Mermin once put it.

Philosopher Tim Maudlin deplores this situation. In his 2019 book Philosophy of Physics: Quantum Theory, he points out that several interpretations of quantum mechanics describe in detail how the world works. These include the GRW model proposed by Ghirardi, Rimini and Weber; the pilot-wave theory of David Bohm; and the many-worlds hypothesis of Hugh Everett. But here’s the irony: Maudlin is so scrupulous in pointing out the flaws of these interpretations that he reinforces my skepticism. They all seem hopelessly kludgy and preposterous.

Introducing consciousness into physics undermines its claim to objectivity. Moreover, as far as we know, consciousness arises only in certain organisms that have existed for a brief period here on Earth. So how can quantum mechanics, if it’s a theory of information rather than matter and energy, apply to the entire cosmos since the big bang? Information-based theories of physics seem like a throwback to geocentrism, which assumed the universe revolves around us. Given the problems with all interpretations of quantum mechanics, agnosticism, again, strikes me as a sensible stance.

Gradually, this consensus collapsed, as empirical evidence for neural theories of consciousness failed to materialize. As I point out in my recent book Mind-Body Problems, there are now a dizzying variety of theories of consciousness. Christof Koch has thrown his weight behind integrated information theory, which holds that consciousness might be a property of all matter, not just brains. This theory suffers from the same problems as information-based theories of quantum mechanics. Theorists such as Roger Penrose, who won last year’s Nobel Prize in Physics, have conjectured that quantum effects underpin consciousness, but this theory is even more lacking in evidence than integrated information theory.

Researchers cannot even agree on what form a theory of consciousness should take. Should it be a philosophical treatise? A purely mathematical model? A gigantic algorithm, perhaps based on Bayesian computation? Should it borrow concepts from Buddhism, such as anatta, the doctrine of no self? All of the above? None of the above? Consensus seems farther away than ever. And that’s a good thing. We should be open-minded about our minds.

So, what’s the difference, if any, between me and Gallagher, my former friend? I like to think it’s a matter of style. Gallagher scorned the choices of others. He resembled one of those mean-spirited atheists who revile the faithful for their beliefs. I try not to be dogmatic in my disbelief, and to be sympathetic toward those who, like Francis Collins, have found answers that work for them. Also, I get a kick out of inventive theories of everything, such as John Wheeler’s “it from bit” and Freeman Dyson’s principle of maximum diversity, even if I can’t embrace them.

I’m definitely a skeptic. I doubt we’ll ever know whether God exists, what quantum mechanics means, how matter makes mind. These three puzzles, I suspect, are different aspects of a single, impenetrable mystery at the heart of things. But one of the pleasures of agnosticism—perhaps the greatest pleasure—is that I can keep looking for answers and hoping that a revelation awaits just over the horizon.