Aquas, A Flying Ship That Moves Passengers And Cargo At Speed Up To 200 km/h

by Ashwini Sakharkar: RDC Aqualines announced its future plan to move the design and manufacture of its Aquas ekranoplan to the Basque Country, Spain… 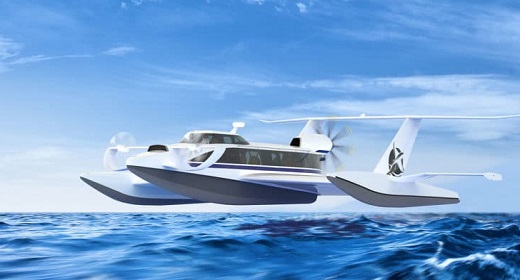 Its Aquas ekranoplan is a versatile multi-purpose vehicle designed for short-distance passenger and cargo transportation in coastal areas.

Classified as a wing-in-ground (WIG) marine craft, the Aquas uses the ground effect to hover above the waterline. This means that it may look like an airplane but, since it can’t achieve free flight like one, it’s considered a marine vessel. The compression of the air produced between the ground and the ekranoplan wing increases its lift, and when it reaches a speed of 110 km/h (68 mph), the device manages to glide over the water.

The 22.5 meters (74 feet) long craft could be perfect for transporting up to 12 passengers or cargo plus two pilots over short distances. Its advanced safety, comfort, and seakeeping performance will provide the people with a unique experience.

The “flying ship” is supposed to be a 100% electric and hydrogen hybrid making it eco-friendly. A 600-hp electric-hydrogen hybrid powertrain will turn the three propellers – two small ones on either side of the nose and a larger, central one at the rear – and retractable winglets will enhance the aerodynamics. It has a top speed of 200 km/h (125 mph), with a cruising speed of 185 km/h (115 mph), and a range of 600 km (about 375 miles) with a full load.

These kinds of seaplanes will be mainly used for passenger transport but could also improve search and rescue operations at sea, thanks to the advantage of offering versatile loading and unloading. This multi-purpose flying vessel concept was inspired by the new needs and demands of potential operators worldwide.

History, however, shows that – like everything – the ground-effect marine crafts also have their drawbacks. The ship hovering just above the water is not able to tilt too much during the flight (so as not to hit the water), so any change of flight direction must be planned early enough because its execution takes quite a long time.

RDC Aqualines boasts of being a multinational company specializing in the design, development, and future production of a new generation of marine transportation vessels, using mainly ground effect technology. The “flying ship,” as they call it, is offered in various sizes, from a 3-seater to an ekranoplan-like bike, a hydrofoil speedboat, and the ekranoplan-like ferry described above.