Interest Soars In Self-Sustaining Homes Called Earthships: “It’s Kind Of Like A Conspiracy Of Enlightenment”

Along a rural road in northern New Mexico, homes rise from the dusty desert with futuristic shapes resembling something from another planet. They are known as Earthships: off-the-grid homes built into the ground… 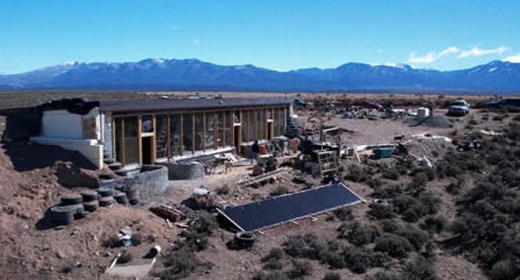 They are made mostly from recycled materials — what some would call garbage — like used tires tightly packed with dirt for insulation, structural walls and old bottles that become part of the interior.

There are no power, water or sewage lines connected to one Earthship under construction. Electricity is generated from solar panels, water is collected on the roof and filtered, and the treated sewage nourishes plants and trees.

Architect Michael Reynolds is the grandfather of the Earthship concept, building the first one in 1979 and teaching others ever since.

Reynolds said the increase in inquiries he’s received about the homes has doubled in the last couple months.

“Your typical human still lives for the American dream,” Reynolds told CBS News correspondent Janet Shamlian. “You know, my custom home with a dressing room that has room for 60 pairs of shoes … those days, in my mind, are already gone.”

Skyrocketing energy prices and a growing desire to live sustainably amid climate change are fueling demand for homes that, generally, don’t use fuel.

John LaSala, who spent 40 years living and working in New York City, bought an Earthship five years ago for about $300,000 and says he hasn’t looked back.

“It was a very, very small leap from what you’re told at the beginning — ‘Oh my goodness, you’re off the grid. That can be the worst thing in the world,'” he said.

“You practice what we all should be practicing, which is conservation,” he said. “So if there’s clouds for three days, you don’t turn on the inverter, which means you have electricity for the primary stuff, but your computer and your stereo can’t plug in.”

His 1,200-square-foot home has no microwave and no clothing dryer. On the other hand, the propane to heat water costs him about $90 dollars a year.

LaSala said he has no regrets about his decision.

“I wouldn’t live any other way,” he said.

It’s a way of life others are considering.

At Earthship Academy, people from all over travel to the community for a four-week immersive class where they learn how to build an Earthship. The students live in an Earthship while they learn.

“Every job, we build all our sets and then we throw everything in the trash,” Hollywood production designer Bianca Ferro said of why she’s attending the academy. “So, I’ve just found over the years that in my free time, I just want to combat that in some way. I want to find solutions.”

But you don’t need a class to check out life off the grid. Homes like this are available on vacation rental sites, giving people a chance to test-drive a lifestyle of extreme sustainability.

“It’s kind of like a conspiracy of enlightenment,” LaSala said. “Everybody’s their way, but they live here all for the same reason — they want to be off grid, they like the isolation of it, they like the stunning beauty of it and they think this is a better way to go.”