Why Many Are Returning to Ancient Spiritual Practices

by Sebene Selassie: Granting ourselves permission to feel can help us find acceptance… 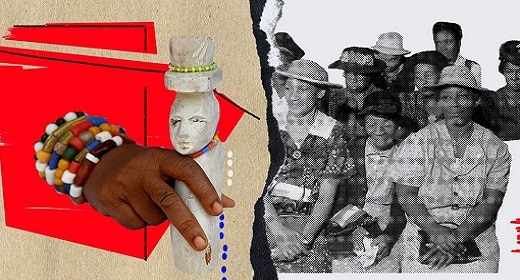 An increasing number of people are reconnecting to their roots by embracing traditional religions.

Life is about questioning things, especially the ideas and beliefs that we’ve been told are objectively right. When we are presented with a view of the world that we’re told is immutable, curiosity transforms it, opening up so many new ways of seeing ourselves and others.

Increasingly, that’s what some people are doing through the lens of African spirituality. “I think that for many years more people have begun questioning Christianity and pushing back against many oppressive and discriminatory ideas pushed in some Christian churches,” says Dr. Akissi Britton, assistant professor of Africana studies at Rutgers University and a Lucumí priestess for 37 years. “So they are looking for alternatives.”

Prior to being forcibly brought to the Americas, West Africans were composed of people from many tribes and practiced several different religions. Some believed in non-Westernized versions of Christianity and Islam, while others were Akan, Yoruba, or Dahomean. They worshipped different gods, and they had a unique outlook on the world that was completely different from the slave owners who often imposed their version of Christianity upon them.

In recent years, as more people are questioning the structures of traditional religions, many are turning to ancestral practices to make meaning of the world and reconnect with their roots. Because, even within Black Christianity, there are influences of some of the indigenous African religions that ancestors brought with them and fought hard to pass down.

Porsche Little is training to be a priestess in the Lucumí and Ifá traditions. Dr. Britton describes Lucumí as the “Cuban denomination of orisha worship that originates with the Yoruba of Nigeria, who brought the religion with them when they were kidnapped during the transatlantic slave trade.” Ifá is a Yoruba religion and system of divination.

Even though Little wasn’t raised in these faith practices, her mother prepared her from a young age to engage with spirituality. “She taught me how to communicate with my guides and ancestors at a very young age. So I grew up always talking to spirits,” Little tells Shondaland. “Whether I was venting or asking them for protection, I had a healthy relationship with my spirit guides.”

Dr. Britton, however, has a long history with Lucumí. “My mother, who grew up in Spanish Harlem, was introduced to the religion as a teenager. She eventually came fully into the tradition in the late ’70s and was initiated in the early ’80s,” she explains. “I was initiated two years later. My sister was then initiated six months after me.”

Rach Junard, a yoga instructor from Boston who identifies as she/they, was also not raised practicing Ifá or other African traditional religions despite their parents’ Nigerian background. Junard’s parents never talked about Ifá, and yet they surrounded them with it.

“When [my parents] immigrated to the States, they did their best to assimilate. Not to mention, because of the colonization of Nigeria, it wasn’t something they grew up heavily learning either,” says Junard. “It was more told to them as folktales, which they passed on to me. A few years ago, I realized it wasn’t just folktales, that it was in fact quite real, and I could find so much information from books or the internet.”

One of the books Dr. Britton suggests for people seeking knowledge about African traditional religions is Black Gods — Orisa Studies in the New World, by scholar John Mason. The text discusses 13 orishas, including their symbols, personal characteristics, philosophical values, animal familiars, and feast days. Knowing the foundations is also the key to figuring out your own practice, which can vary across individuals and communities. Writer Akwaeke Emezi is a great example of someone who is, within the space of community, engaging in African spirituality through a framework called Black Spirit Theory. Black Spirit Theory forms the basis of their work, like their recent memoir, Dear Senthuran. Your practice doesn’t have to look like anyone else’s, because African spirituality is infinite.

There isn’t any data yet to prove that there’s a definite increase in Black people practicing African spirituality. But pop culture is shifting the tides and making people explore them more. Writers like Emezi are certainly sparking conversations about aspects of Igbo ontology, like ogbanje — a spirit in a human body, born to die. Artists like Beyoncé are using their music to increase knowledge of Yoruba deities like Oshun, the goddess of love, in their work. And, as Dr. Britton points out, “Social media sites are also ripe with accounts discussing these traditions.”

There are a lot of reasons why we might be seeing more visibility of African spirituality. Junard says groundbreaking accounts like Tatianna Tarot’s have been raising awareness about this topic for years, but they feel interest increased after the summer of 2020 with the global pandemic and the George Floyd uprisings. And, she adds, Black people are “seeing a rise in decolonization of wellness,” an industry that can often feel overwhelmingly whitewashed, or drowned in cultural appropriation.

In the face of that, more Black people are defining what wellness means for themselves and “wanting to connect more closely with their ancestors in a way that feels authentic,” Junard says. And, for some, a return to African spirituality feels like coming home. “I came into orisha worship as I got older. I believe it found me,” Little says, describing her experience as “pure bliss.”

I was destined to be a priestess. … I have never experienced that type of guidance before in my adult spiritual life. It has saved me from going down the wrong path way too many times.

“It was something I was supposed to be doing. I was destined to be a priestess. … I have never experienced that type of guidance before in my adult spiritual life. It has saved me from going down the wrong path way too many times.”

Efe Osaren, a young Nigerian-American midwife from Brooklyn, says she learned her paternal grandmother was a priestess in Ifá and a midwife while Osaren herself was in midwifery school. “I had started keeping an altar maybe a year prior to my father telling me about [my grandmother],” she says. “On my solo trip to Edo in 2019, I met with family members who were never Christian. It was definitely something my parents hid from my sisters and me growing up. I do, however, feel very lucky that it’s only one generation separated and that I can reclaim what colonialism tried to take away.”

Osaren says that while she has not yet tapped into the power of spiritual midwifery, she noticed “how effortless it was for me to ‘catch’ the baby. … It felt like muscle memory.

“I don’t consider midwifery a calling — more like it’s what I’ve always known. Maybe from past lives? The spirit of my grandmother?” Osaren wonders.

Even though there isn’t hard data yet, it seems more Black people are increasingly turning toward traditional African religions as a way of reconnecting to the past. This might largely be influenced by pop culture, but it would be a mistake to assume that lessens its power. If anything, it’s proof of the power of African religions, that some of the greatest writers and artists are engaging with it deeply, changing the views of people all over the world.

“Everything we were taught that was ‘demonic’ has now shown that it can help change our lives for the better,” says Little. “Once you have that little bit of knowledge, it opens up the gate for you to be reunited with your roots.”