Feeling Dizzy When You Stand Up? Try These Muscle Techniques 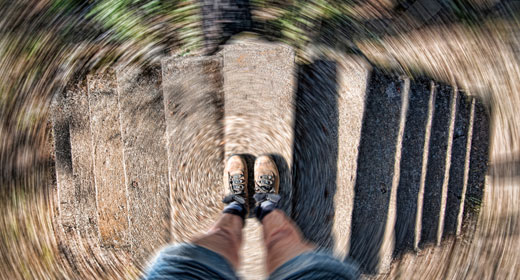 A short spell of dizziness when standing is often a sign of initial orthostatic hypotension (IOH), a blood pressure condition that affects up to 70% of people. For most, the dizzy feeling is accompanied by blurred vision or lightheadedness, which disappears after roughly a minute. About 7% of people with IOD, however, frequently lose consciousness when they stand too quickly.

The disorder does not cause long-term damage, but it does have a negative impact on a person’s quality of life. The general advice for managing symptoms is to “stand up more slowly.” A new study, however, offers two cost- and drug-free techniques to reduce the symptoms of IOH: knee raises before standing or leg tensing after standing.

A dizzying drop in blood pressure

While a person is lying down, their blood pressure is uniform throughout the body. As that person stands, however, gravity pulls blood downward, creating high pressure in the legs and low pressure in the head. This is bad news for the oxygen-gluttonous brain. Low pressure means less blood, and less blood means less oxygen. If the low pressure is not corrected within a few seconds, the person will become dizzy. If it goes on much longer, the lack of oxygen will cause them to faint.

As soon as the brain detects the drop in blood pressure, it manipulates the cardiovascular system and the heart begins pumping faster. This will help deliver more blood to the brain if there is blood available. Leg muscles are big, representing almost 60% of a person’s muscle mass. This means they can hold a lot of blood. If there is a lot of blood in the legs, then there is less blood for the brain. To ensure there is blood available, blood vessels in the legs constrict, preventing blood from rushing into the leg muscles. If everything goes well, blood pressure is corrected within seconds, and the person does not experience any symptoms. Unfortunately, things do not always go well for people with IOH.

Researchers at the University of Calgary sought to determine if muscle activation could help prevent the dramatic drop in blood pressure. To do this, they asked 22 young women with a history of fainting after standing to test two techniques. The first technique, called PREACT, boosted the heart rate before standing. Participants raised their knees in a pedaling motion for 30 seconds, while seated. The second strategy, called TENSE, created pressure in the lower body by squeezing the leg muscles after standing. The participants crossed their legs and tensed the leg muscles for 30 seconds.

Both the PREACT and the TENSE techniques significantly reduced the drop in blood pressure after standing, compared to the control (–21 mmHg and -18 mmHg compared to -28 mmHg, respectively). Additionally, participants reported fewer symptoms upon standing.

“Our study provides a novel and cost-free symptom management technique that patients with IOH can use to manage their symptoms,” noted first author Nasia A. Sheikh. “Since it is a physical maneuver, it simply requires the lower body limbs, which patients can utilize at any time and from anywhere to combat their symptoms.”

The authors plan to test the techniques on a larger population, especially the elderly, who are most likely to have IOH.