by Ashwini Sakharkar: The Luxembourg-based startup Maana Electric will soon be testing its TerraBox, a fully automated factory the size of several shipping containers that takes sand and produces solar panels… 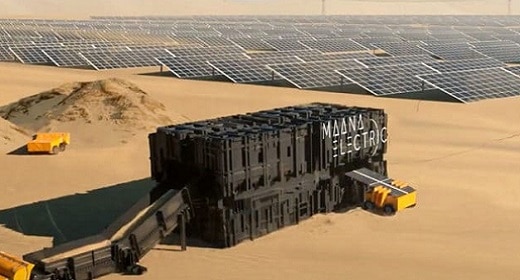 The company aims to send these small warehouse container-like boxes, capable of building solar panels using only electricity and sand as inputs, to the deserts of the Earth, in order to contribute to the fight against climate change.

If all goes according to the plans, the technology could reach the Moon, Mars, and beyond as well to help future space colonies meet their energy needs. The TerraBox fits within shipping containers, allowing the mini-factories to be transported to deserts across the globe and produce clean, renewable energy.

In addition to contributing to the fight against climate change, this potentially revolutionary product could also help reduce the dependence of renewable energy operators on China, which manufactures the majority of the world’s photovoltaic solar panels.

The first pilot uses of TerraBox will begin here on Earth in 2022, and the company is already working on a suitable lunar version of its TerraBox, designed to convert lunar regolith into high purity silicon. This is theoretically enough to produce one megawatt of energy per year. The solar panel manufacturing process also releases oxygen as a by-product, which could be used by future astronauts to create breathable environments in space.

Maana Electric’s Space TerraBox is designed to be lighter so it can be easily transported off the planet. The TerraBox designed for Earth and the one designed for space share about 60% of the same technology.

According to the company, today’s solar panels are cleaner than our current energy mix, but their production process produces more CO2 per kWh than where we need to be by 2040 to stop global warming. The company claims that its panels are 100% clean from the moment they are produced until the end of their lifetime.