by Vincent Williams: Few and far between are writings that have power to shape a whole culture. 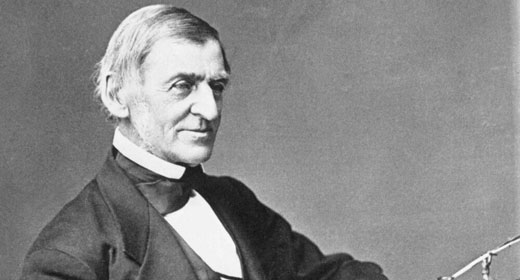 Even rarer, are the figures who have that mix of bravery, intellect, and a sense of the situation’s gravity to attempt such a feat. Ralph Waldo Emerson (1803-1882) had all of the above when he published the essay that jump-started his literary career. “Nature” (public library) was the spark-plug for the Transcendentalist movement and its guiding ethos. In its 47 pages, Emerson articulates his spirituality of nature. As the opening paragraph is so memorable, it’s worth quoting in its entirety. Emerson attempts nothing less than altering the course of American spirituality:

“Our age is retrospective. It builds the sepulchers of the fathers. It writes biographies, histories, and criticism. The foregoing generations beheld God and nature face to face; we, through their eyes. Why should not we also enjoy an original relation to the universe? Why should not we have a poetry and philosophy of insight and not of tradition, and a religion by revelation to us, and not the history of theirs? Embosomed for a season in nature, whose floods of life stream around and through us, and invite us, by the powers they supply, to action proportioned to nature, why should we grope among the dry bones of the past, or put the living generation into masquerade out of its faded wardrobe? The sun shines today also. There is more wool and flax in the fields. There are new lands, new men, new thoughts. Let us demand our own works and laws and worship.”

At the core of Emerson’s project is a reliance on contemporary experience, not merely the wise words of those who came before. He wanted mid-19th century America to define its own paradigm of spirituality, one attuned to its place in the world and its unique relationship with nature. As a Transcendentalist, Emerson levied substantial critiques (matched in force only by his dear friend, Henry David Thoreau, whose Walden helps us understand the importance of reflection) against the burgeoning industrialization of the States during his time. Although these changes were vast, they were nothing, of course, to the rapid changes facing our societies in the 21st century. The lesson here transcends time.

Emerson’s call to renewed spirituality was not meant solely as a critique to tradition. He would be the first to say, indeed, that a grounding in history is a prerequisite for creativity (in fact, this truth is one of the reasons I created Curating Theology). However, his philosophy of reliance on one’s own experience is meant chiefly as a remark on the limitless capacity of human beings. We don’t give ourselves enough credit, Emerson argued, when we simply regurgitate the past; what makes us unique is our place in the timeline of history. Human nature is always able—just as those great thinkers of the past were—to receive new defining revelation. Again, “Why should not we also enjoy an original relation to the universe?”

Proposing a new view of nature, one replete with the possibility of new insight, Emerson thought:

In other words, look no further than nature itself for inspiration to wrestle with life’s most challenging questions. Unfortunately, most people did not—and still don’t—have the habit of looking at nature in this way. Cities, for instance, provide us with immense benefits, but (as with everything) there are pros and cons. Roads, cars, buildings, pavement—these have all replaced an earlier direct relation to nature. It’s not uncommon for us to miss out on a tangible experience with nature; we can go months, even years, without stopping to ponder something as simple as a tree on the way to work.

The solution, Emerson argues, is to form a habit of mind in which our reflections and our experiences form a harmonious interchange.

“The lover of nature is he whose inward and outward sense are still truly adjusted to each other; who has retained the spirit of infancy even into the era of manhood. His intercourse between heaven and earth becomes part of his daily food.”

As humans, we usually tend toward one or another extreme. Our spirituality is certainly no exception. To appreciate the role nature could offer, we need the right ratio of introspection and tangible openness to the external world. Too cerebral, and we’ll miss grounding our being in the created world. Too care-free and unreflective, and we’ll lose the chance to define our own vision of the life worth living.

“In the woods, we return to reason and faith. There I feel that nothing can befall me in life,—no disgrace, no calamity (leaving me my eyes), which nature cannot repair. Standing on the bare ground,—my head bathed by the blithe air and uplifted into infinite space,—all mean egotism vanishes. I became a transparent eyeball; I am nothing; I see all; the currents of the Universal Being circulate through me; I am part or parcel of God.”

These are strong words, but the “nature as healer” metaphor is one found throughout the span of human history, religion, and culture. In Christianity, we can see creation as the space where God meets the needs of all beings. The atmosphere (here meaning more than the air surrounding the earth) God has provided us—and of which we are but one part—is uniquely suited to provide for human nature, despite the enduring reality of sin.

Illustrating further, Emerson elevates even the simplest pleasures of nature above the pomp and circumstance of kings and monarchs.

“How does Nature deify us with a few and cheap elements! Give me health and a day, and I will make the pomp of emperors ridiculous. The dawn is my Assyria; the sunset and moonrise my Paphos, and unimaginable realms of faerie; broad noon shall be my England of the senses and the understandings; the night shall be my Germany of mystic philosophy and dreams.”

We dress in expensive clothing, cultivate possessions intended to impress, and behave so as to be rewarded with status. All this effort, Emerson says, is wasted. To receive all of that—and more!—you only need to watch a caterpillar crawl on a leaf in the summer sun. We seem to be experts, indeed, in the art of creating trifles and diversions; those cheap, ineffective imitations of nature’s provision. Let us go directly to the source!

This relation to nature is good for our souls. Observing and experiencing life in nature provides all the fuel even the most curious intellect could need. Pointing to the effect nature has on us, Emerson writes:

“It always speaks of Spirit. It suggests the absolute. It is a perpetual effect. It is a great shadow pointing always to the sun behind us… The happiest man is he who learns from nature the lesson of worship.”

In nature we see the interconnectedness of all things. If we look close enough, with receptive hearts, we can see the imprint of creation in each of these acts of God. Nature leaves us searching for more, but always opens itself up to renewed discovery. Relating in this way to nature is, for Emerson, the mark of the devout person:

“The invariable mark of wisdom is to see the miraculous in the common.”

Leaving his readers with instructions on how to begin living from a place of interaction with nature, Emerson counsels:

“Every spirit builds itself a house, and beyond its house a world, and beyond its world a heaven. Know then that the world exists for you… Build therefore your own world. As fast as you conform your life to the pure idea in your mind, that will unfold its great proportions. A correspondent revolution in things will attend the influx of the spirit… To a sound judgment, the most abstract truth is also the most practical. Whenever a true theory appears, it will be its own evidence.”

Perhaps Emerson’s spirituality of nature is such a theory.