These Upcoming Cancer Vaccines May Prevent Tumors Before They Appear

by B. David Zarley: A new wave of preventative cancer vaccines are set to begin trials. 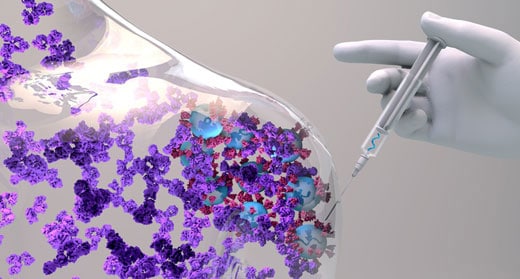 The shots are being tested by patients who are at very high risk for cancer, due to genetics or family history — but they could be the first small steps toward a general preventative cancer vaccine.

“We are a long way from a general vaccine,” Shizuko Sei, a medical oncologist at the National Cancer Institute’s Division of Cancer Prevention, told Kaiser. “But it could be in the distant future. It’s a stepwise approach.”

Sic’em, immune system: Preventative cancer vaccines fall under the broader umbrella of immunotherapy: essentially, harnessing the body’s immune system to launch a regicide against the emperor of all maladies.

Recently, scientists have discovered that a type of immune cell known as a T cell is capable of recognizing the unique signatures of a tumor cell — and giving them the business.

Therapies designed to increase T cells’ killing power and ability to target cancer after it appears have already been approved, and they can be quite successful at treating some cancers. (More recent work is recruiting another type of immune cell, the awesomely named natural killer cells, to fight cancer.)

Vaccines that prevent cancer caused by viruses, like hepatitis B and HPV, already exist, but the vast majority of cancers have other causes — inherited mutations, external causes (like smoking or UV exposure), or just random bad luck.

Vaccines that prevent cancer caused by viruses already exist, but the vast majority of cancers have other causes.

A vaccine against cancers caused by Lynch syndrome — an inherited disorder — will be among the first to test whether a vaccine can stop nonviral cancers from appearing. The Lynch trial is among several looking to test a new generation of preventative cancer vaccines.

Next-gen cancer vaccines: Lynch syndrome is caused by a mutation in the gene that helps repair our DNA. With DNA’s repair mechanism hampered, mutations pile up; patients with Lynch syndrome have a 70% chance of cancer over their lifetimes.

“There is a lot of anxiety in this patient population,” MD Anderson Cancer Center oncologist and geneticist Eduardo Vilar-Sanchez told Kaiser. “It is a big psychological burden.”

Vilar-Sanchez will soon begin a trial for a Lynch syndrome vaccine. The vaccine uses an engineered virus studded with “neoantigens,” targets that are only found on cancer cells. Because the immune response varies person to person, and not every tumor produces the same neoantigens, the team took a kitchen sink approach: their vaccine has 209 different neoantigens.

The vaccine will be given to 45 subjects who have either gone into remission or have yet to develop tumors, Kaiser says. The trial will test if the shot stimulates an immune response and what effect it may have on polyp and tumor development.

If things look promising, the next step is a larger, longer, randomized study, perhaps over a decade.

While the dream of a vaccine capable of preventing many kinds of cancer may be far off, one team is testing a multi-cancer vaccine in dogs — a possible first step.

While the dream of a vaccine capable of preventing many kinds of cancer may be far off, Kaiser reported on a team already testing a multi-cancer vaccine in dogs.

In the five-year study, dogs will receive a vaccine containing 31 antigens for eight cancers common in dogs. If the vaccine proves effective, it might help pave the way for a human version, Stephen Johnston of the Biodesign Institute at Arizona State University told Kaiser.