How to Be Happier—the Buddhist Way

by Victor M. Parachin: Humans lean toward the negative, but we can overcome this tendency. Discover five Buddhism-inspired ways to be happier right now… 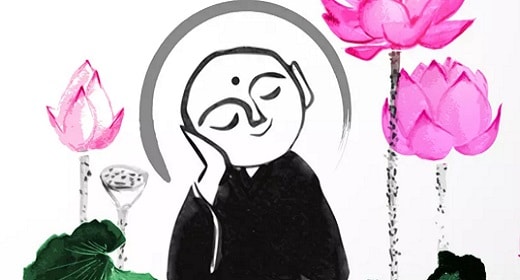 People are surprised when they hear that the beloved Vietnamese Buddhist monk and author Thich Nhat Hanh used to say he loved cleaning the toilet. When asked how this could possibly be the case, he responded simply and directly: “We’re lucky to have a toilet to clean.”

“We can be truly happy,” he concluded, “when we recognize that we already have more than enough conditions for happiness.”

1. Lean Toward the Positive

Unfortunately, the human brain appears to be hardwired for the negative. Among the wealth of research on this, studies by John Cacioppo a professor of psychiatry and behavioral neuroscience at the University of Chicago, consistently demonstrate that the human brain reacts more strongly to stimuli it deems negative. There is a greater surge in electrical activity. However, it is possible to override this tendency by working with thoughts so that we lean toward the positive.

Anytime an unpleasant event emerges, rather than go negative, pause and try to observe the moment with an open spirit. Try saying to yourself: “Well, this is interesting” or “I wonder what will come from this?”

Research consistently reveals that meditation does increase a person’s happiness level. For example, an NIH study of 30 medical students measured their cortisol levels before meditation. (Cortisol being the body’s hormone responsible for stress; too much of it can lead to sleep disorder, anxiety, and mood swings.) The study revealed that after just four days of mindful meditation, the students’ cortisol levels decreased significantly while their happiness was strengthened.

The key, of course, is to keep meditating regularly. In his book No Mud, No Lotus: The Art of Transforming Suffering, Thich Nhat Hanh shares an insight that helped him in his meditation practice: “When I was a young monk, I wondered why the Buddha kept practicing mindfulness and meditation even after he had already become a buddha. Now I find the answer is plain enough to see. Happiness is impermanent, like everything else. In order for happiness to be extended and renewed, you have to learn how to feed your happiness.” So, even if you are satisfied with your current happiness level, it still needs to be nourished through regular meditation.

While everyone needs enough money to cover life’s necessities and to feel financially stable, the harsh pursuit of wealth can also open the door to emotional and mental anguish. That’s why Swami Sivananda bluntly teaches: “There is difficulty in amassing wealth. There is more difficulty in protecting it. There is pain when it becomes less. There is still more pain if one loses it.”

“I was giving a talk in Hong Kong once,” recalled the Tibetan leader Gehlek Rimpoche. “Afterward, a fellow asked me, ‘Do I have to give up my Rolls Royce?’ I told him that as long as he drove the Rolls Royce, he was okay. But when the Rolls Royce started driving him, he’d be in trouble.”

It’s likely that one time or another we’ve all asked ourselves “why me?” when an issue emerges. That question simply drives pain into deeper suffering. Instead try asking better questions, ones that lift the spirit rather than drag it down. Consider the example of comic artist John Porcellino, who practices Zen meditation. In an interview with Lion’s Roar, he related a time when a major illness came into his life:

“When I got very ill, the first thing I thought, naturally, was ‘Why me?’ But just as naturally, the next thought was, ‘Why not me?’ Terrible things happen to people every day. Why should I be exempt? I saw my illnesses in the context of my practice. They were an opportunity to explore selflessness, patience, fearlessness.”

5. Choose Where to Put Your Attention

It’s true that staying optimistic and hopeful when the daily news delivers one negative story after another can be challenging. Yet, this can and must be done for happiness to continue being present. In a Time magazine interview, the Dalai Lama was asked how he managed to stay optimistic and faithful with so much hate in the world. His response offers a way through negativity and into an optimistic spirit: “There’s always some problem, some killing, some murder or terrorist act or scandal everywhere, every day,” he replied. “But if you think the whole world is like that, you’re wrong. Out of six billion humans, the troublemakers are just a handful.”

A similar perspective is shared by Marianne Elliott, a human rights activist and author of Zen Under Fire. For two years she worked in Afghanistan, “witnessing a seemingly endless parade of human suffering and injustice.” One day she asked an Afghan colleague how he could keep believing things would improve when the signs seemed so bad. “What choice do I have?” he replied, “I don’t know what the future holds. So why not believe it will get better? It motivates me to keep working and makes my life bearable.”