It’s Not Just You. We’re All Socially Awkward Now.

by Lisa Bonos: “I’m looking for a kumquat. Do you know what that looks like?” 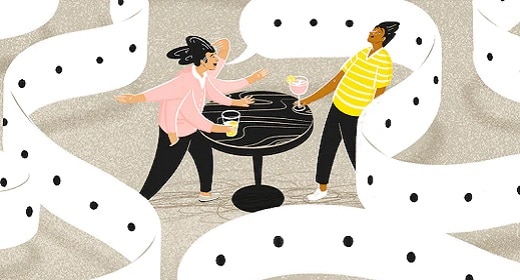 Kay Kingsman flagged down a fellow shopper in the grocery store with that question — and no, he couldn’t identify a kumquat. But she kept on talking. “How’s your day?” she recalls asking. “Having a fun grocery trip?”

Kingsman, a 27-year-old manufacturing engineer in Portland, Ore., dragged the conversation on so long that this stranger in the citrus aisle interjected with an answer to a question she hadn’t pondered: “I’m married.”

That’s when Kingsman realized she didn’t know how to have a casual conversation with a stranger anymore. She hadn’t been flirting, at least not intentionally. She’d been earnestly seeking those little orange oblongs for a cake she was baking, and once she opened her mouth, she was so excited to be talking to someone that she couldn’t stop.

Verbal diarrhea is just one symptom of late-stage pandemic social awkwardness. Others include asking yourself: How far away did I used to stand when talking to someone? Should I stand farther now? How long is a conversation supposed to last anyway? Do my friends still like me?

As vaccinations ramp up and our social lives restart, many of us are rusty, tongue-tied, rambling or insecure — and it shows. “Social interaction is a million things knitted into one,” says Marisa Franco, a psychologist who specializes in friendship. It’s turning thoughts into speech, making eye contact, entering and exiting a conversation, and more. “It’s like you haven’t practiced a language, then you go back to the country and it starts to come back.”

Rest assured fellow awkwards, your social skills will come back. And you’re not the only one feeling out of sorts. 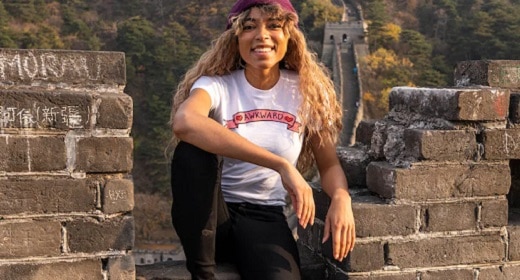 The coronavirus pandemic brought with it so many new rules: We were urged to wear masks in public, to stand at least six feet away from others, to socialize indoors only with those in a defined pod, to mute and unmute ourselves at the appropriate times on Zoom. All of that was uncomfortable at first. Shouldn’t reemergence be the easy part?

Not necessarily. Our new reality isn’t the same as life before covid-19; it’s an in-between stage, a collective adolescence of sorts. We’ve changed. The world has, too. “What is awkward is that different people have different rules,” says Dave Nadelberg, founder of the “Mortified” podcast and stage shows that feature embarrassing childhood stories. “Everyone says they care about covid safety, but everybody has a different definition. People are appalled if you’re too restrictive or permissive. As the world is opening up, that tension is a little stronger.”

This stage of the pandemic resembles a middle school dance: We’re eager to be with others, but don’t know quite how to act. Our dance moves have aged terribly. “We’ve been sitting around in our sweatpants and not showering for a year. We have to now worry about bad breath and all the things that Zoom conference calls insulated us from,” Nadelberg adds.

At the beginning of the pandemic, says Ty Tashiro, a psychologist and author of “Awkward: The Science of Why We’re Socially Awkward and Why That’s Awesome,” discomfort over social distancing or Zoom etiquette was often outweighed by the pervasive fear and anxiety surrounding catching or spreading the novel coronavirus. “Now the awkwardness gets to stand on its own.”

Loneliness is another emotion that’s ballooned during the pandemic. And the lonelier you are, the likelier you are to be socially anxious, says Franco, the friendship expert. When Franco asked her Instagram followers if they felt their social skills had deteriorated during the pandemic, about 80 percent said yes. However, even if you perceive yourself as awkward, there’s a good chance others haven’t noticed. “We all have a bias to think other people are judging us more than they actually are,” Franco says.

For Alexandra Clemente, a 29-year-old consultant in San Francisco, her awkwardness manifests as fear of overstaying her welcome. She used to understand the cadence of a party, but the pandemic has thrown off her sense of timing. “I don’t want to be rude,” Clemente says. “I’m trying to be aware of what people’s boundaries are.” Her friends have promised to help her read the room, saying: “We’ll tell you when to leave, don’t wor

In our new reality, maybe we’ll care less about being perceived as rude and more about just being real. Derek Brown, owner of the Columbia Room bar in Washington, finds small talk to be difficult these days. “Politeness feels awkward,” Brown says, “not just because of the time you spent without people, but the enormity of what people have gone through” in the past year.

Returning to the office has made some workers recognize the perks of Zoom. Jennifer Sonne, a 33-year-old environmental consultant in Anchorage, started a new job during the pandemic, so when she started coming into the office in the fall, she had trouble recognizing her co-workers in masks. “On Zoom, you see names,” she says. “In the office, I almost wish we could put some name tags on foreheads.”

She can’t quite remember how to gracefully exit an in-person conversation. And then there’s body language, something office workers toiling at home haven’t had to think much about in the past year. “On video conferences or phone calls, you don’t have to worry about your hands or anything more than chest up,” Sonne says. During an impromptu conversation with a colleague in the office, Sonne caught herself wondering what to do with her hands: “Do I put my hands on this chair? On the desk? Do I fiddle with my clothes? Where do humans put their hands? What is body language anymore?”

Jordan Hall found that even going to the mall to buy a shirt at Uniqlo felt strange. “I feel like an ant. I feel small,” the 28-year-old videographer in Los Angeles recalls thinking while trying to maneuver between hundreds of shoppers at Glendale Galleria. “I’m my own main character in my house and now I’m in this flood of people.” He chose the escalator over being in an elevator with strangers and constantly worried about where everyone else had been.

Jordan Hall found that even going to the mall to buy a shirt at Uniqlo felt strange. “I feel like an ant. I feel small,” the 28-year-old videographer in Los Angeles recalls thinking while trying to maneuver between hundreds of shoppers at Glendale Galleria. “I’m my own main character in my house and now I’m in this flood of people.” He chose the escalator over being in an elevator with strangers and constantly worried about where everyone else had been.

For those with reduced social stamina, Franco suggests going slowly and being intentional about whom you reconnect with. “Maybe there are select few [people] you want to talk to,” Franco says. “Be strategic about what getting out there means to you.”

And the next time you’re feeling awkward, Tashiro advises leaning into it. “The best thing to do is to say: ‘It’s a little weird getting back out into public and socializing again, isn’t it?’ ”

Because we’re all searching for some kind of normalcy. Or kumquats.