by Cheryl Katz: With the push for renewables leading to land-use conflicts, building highly efficient utility-scale solar farms on ever-smaller tracts of land has become a top priority… 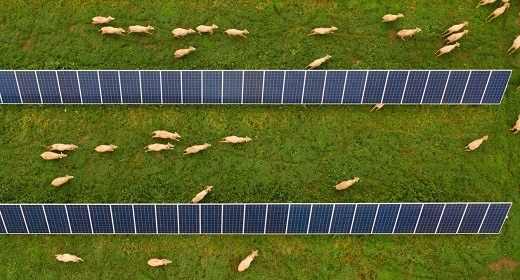 New approaches range from installing PV arrays that take up less space to growing crops between rows of panels.

rom the ground, the new solar farm shimmers like a mirage oasis on a hot summer day. Instead of row after slanting row of shiny panels stretching taller than corn, this array, mounted directly on the earth, lies flat as water. From the air, it looks like an acre-sized swimming pool. Yet despite its modest stature, this new type of photovoltaic plant — one of five now producing a combined 2.5 megawatts of energy in California’s Central Valley — can match the output of conventional solar farms nearly three times its size.

In a meadow in southwestern Germany, solar panels stand upright in long, thin lines, like a series of fences. While farmers raise hay in the wide spaces between rows, the vertical power plant generates carbon-free electricity for the nearby town. Across the border in France, both wine and watts flow from panel-topped vineyards. Tea grows under solar panels in Japan, while pollinators are nurtured in the United States. And from Canada to Australia, utility-scale solar farms producing power for thousands of homes share their space with sheep.

These diverse approaches have the same goal — to help meet the burgeoning global demand for green energy by lightening the footprint of solar farms.

The sharp and immediate cut in fossil fuel emissions needed to keep climate change in check requires a massive ramp-up in clean energy production around the world. The International Energy Agency calls for 630 gigawatts of new solar power and 390 gigawatts of new wind power to be added each year by 2030. (One gigawatt can power roughly 190,000 average U.S. homes.) That growth rate is quadruple the record set in 2020. For solar power, it amounts to building the world’s largest current solar farm nearly every day.

The rush to switch on green electricity faces a challenge: finding enough land.

Nations are under pressure to accelerate their clean energy rollout. The U.S. bid to decarbonize its electric grid by 2035 would require the nation’s solar capacity to increase roughly tenfold over the next dozen years. The European Union, forced in the wake of the Ukraine invasion to reckon with its reliance on Russian oil and gas, now calls for doubling member nations’ solar capacity by 2025. Major deployments are in the works in South America, India, China, and around the world.

But the rush to switch on green electricity faces a challenge: finding suitable land to produce it. Phalanxes of rooftop panels are a key part of the energy transition, analysts say, but utility-scale, grid-connected solar operations are crucial for powering up cities quickly and economically. Ground-based solar is land-intensive, however, with utility-scale arrays often spanning hundreds of acres. Wind farms have their own sprawling land needs. And increasingly, proposed clean energy plants set off conflicts with agriculture, wildlife, recreation, culture, and more.

Battles are being waged across the U.S. by groups such as the residents of Jacumba Hot Springs, a tiny town in the San Diego County desert, who last year sued to stop construction of a nearby 600-acre, 90-megawatt solar facility over fears for their property values and rural lifestyle. Dozens of major projects have been delayed or halted by Native American tribes concerned about impacts on sacred landscapes, conservationists worried about damage to ecosystems, farmers anxious over encroachment on agricultural land, and others. Local resistance poses a “significant obstacle” to the nation’s clean energy goals, a new study by the Massachusetts Institute of Technology concludes. Renewable energy development faces similar hurdles in Europe and elsewhere. 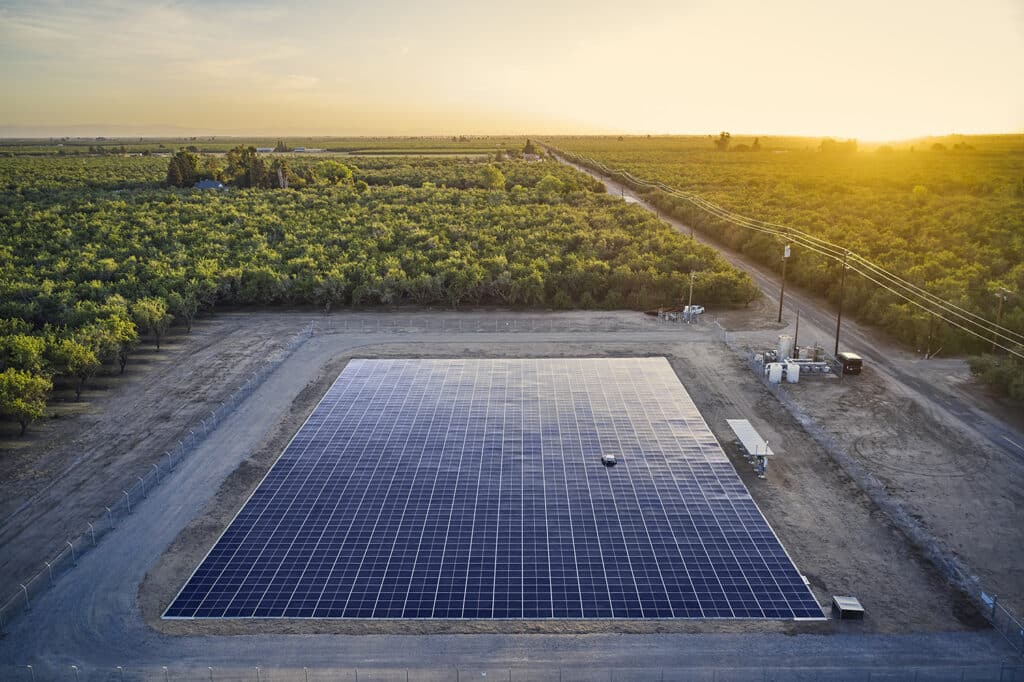 A solar array in Madera County, California, with panels placed side-by-side on the ground. ERTHOS

“The availability of land is very important, and it’s not something we can take for granted,” says Julia Zuckerman, an executive of Clearway Energy, which is developing Arica and Victory Pass Solar — 465 megawatts of solar capacity plus 400 megawatts of four-hour battery storage on 2,665 acres of California desert east of Palm Springs. Solar site possibilities are limited by the need for good sunlight, fairly level ground, and proximity to the electric grid. “So the more that land is then further restricted,” Zuckerman says, “you really are reducing the options in terms of where we can put renewable energy.”

Thanks to improving technology — such as bifacial panels able to harvest sunlight on both sides — solar farms are already producing more power on less land. A recent study by the U.S. Department of Energy’s Lawrence Berkeley National Laboratory finds that the average power density, or peak output per acre, of utility-scale plants increased by as much as 52 percent in the past decade. Energy density, or total megawatt hours generated per acre over the course of a year, rose by up to one-third.

Yet most estimates of solar energy’s land requirements are outdated, still relying on numbers from the early days of utility-scale operations, when the efficiency was significantly lower, says study coauthor Mark Bolinger. Arrays that track the sun throughout the day, the dominant technology currently in use, need approximately four acres of panels for every megawatt of power — less than half the land needed a decade ago. That trend, says Bolinger, “should continue into the foreseeable future.”

Indeed, manufacturers are packing larger silicon wafers into solar cells and boosting panels’ ability to convert sunlight into watts. Increasingly efficient technologies such as heterojunction cells, which are able to capture photons that can pass through traditional cells, are gaining steam. And photovoltaics are continuing to evolve.

“There are plenty of ways to make a cell more efficient,” says Jenny Chase, head of solar analysis for BloombergNEF.

Chase says that the new designs that aim to lighten the solar footprint are unlikely to replace conventional utility-scale plants anytime soon. But these novel approaches could help spur solar energy deployment by making its land use more efficient and easing siting conflicts.

In California’s Central Valley, the five new horizontal solar farms are turning conventional photovoltaic plant architecture on its side.

“We call it high-density solar,” says Daniel Flanigan, chief marketing and product officer of Erthos, the projects’ Arizona-based designer. Laying panels side-by-side on the ground — instead of atop rows of metal racks spaced to prevent self-shading and allow tracking — cuts land use by two-thirds, Flanigan says. Flat solar plants are also cheaper and faster to build because they eliminate the costly steel and engineering of conventional solar farms, according to the company. And the panels’ low profile makes them less noticeable on the landscape. 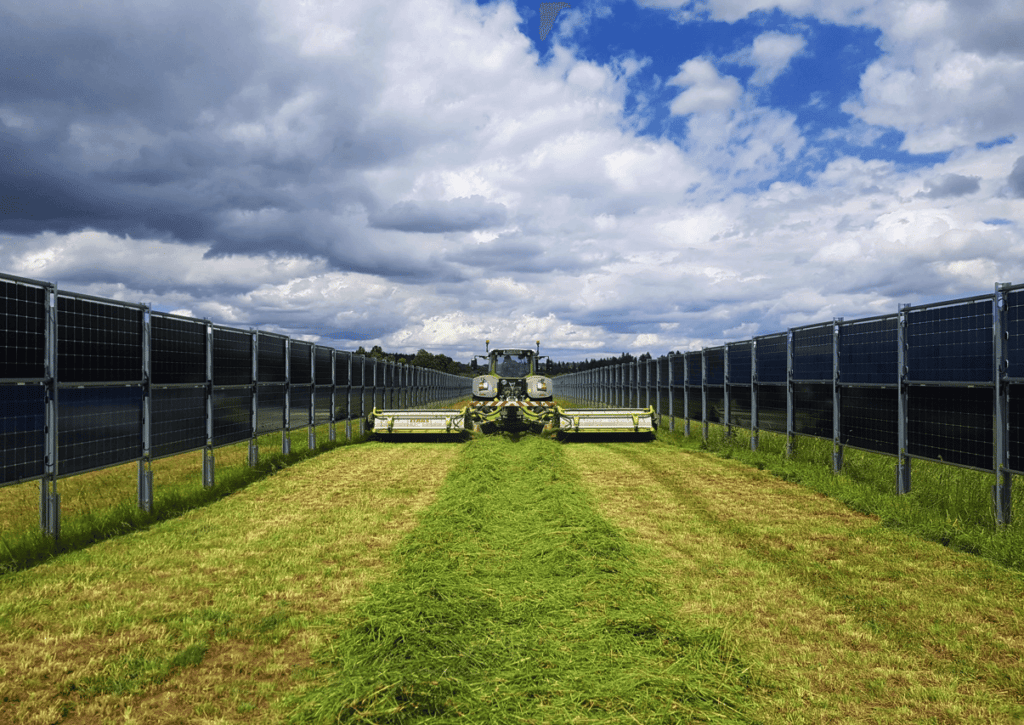 While the flat design loses the energy-yield benefits of sun-tracking systems, Flanigan says the system makes up for it by packing in more panels. Also, the earth serves as a heat-sink, keeping solar cells from losing efficiency as they heat up. Erthos expects to have another 40 megawatts of horizontal solar arrays operating in the U.S. by the end of this year, says Flanigan. Similar horizontal plants are appearing in the Netherlands, Australia, and elsewhere.

An innovative solar farm in Germany takes the opposite tack — standing panels upright. Vertical bifacial modules at a 4.1-megawatt plant in Baden-Württemberg generate power for 1,400 homes, according to developer Next2Sun. This novel layout is most productive when the sun is at low angles — boosting the electricity supply during the low-output, high-demand hours of mornings and afternoons. A recent analysis by Germany’s Leipzig University of Applied Sciences concludes that adding vertical solar plants to the renewable energy mix can help stabilize the electric grid and lower the need for natural gas-fired “peaker” plants that generate electricity at times of maximum demand.

What’s more, the rows of upright panels occupy very little ground, leaving room for crops and farm equipment in between — a technology known as agrivoltaics or agrisolar.

In Japan, everything from flowers to rice has been grown under elevated solar panels.

While still fairly limited, agrivoltaics has grown dramatically in recent years. As of last year, the total global capacity exceeds 14 gigawatts, according to Germany’s Fraunhofer Institute for Solar Energy Systems. The world’s largest dual-use system is in China, where solar panels topping a massive berry farm on the edge of the Gobi desert can produce 700 megawatts of power, according to the institute.

Agriculture has been mixed with solar for some time in Japan, where everything from flowers to rice has been grown under elevated panels. Installations are expanding in Europe, such as a solar vineyard in the south of France that produces 2 megawatts of electricity, along with Chardonnay and other grapes. The U.S. lags behind, but projects are beginning to blossom, including a 13-megawatt plant that houses bees in Oregon, and a 2.9-megawatt farm in Connecticut that will raise vegetables while helping power the state’s colleges and universities. Researchers are experimenting with which plants do best under solar panels and even trying to grow tomatoes and potatoes between rows at existing utility-scale farms, Macknick says.

While diversified harvests compound solar land benefits, analysts point out that agrivoltaics are difficult to scale up and may never become more than a niche use. Combining agriculture and energy can be costly, requiring special technology, such as raised panels, to make room for plants or animals. To date, most dual-use operations are fairly small.

“There’s a limited number of crops you can do, and most of the work has focused on either vegetables or berries that don’t need the full amount of light,” Bloomberg’s Chase says.

And farmers aren’t exactly clamoring to add energy production to their chores. Says Macknick, “We are seeing a bit of an imbalance of this being driven more by the solar side than from the agricultural side.” Still, he says, “the field is really just emerging … I think we’re going to see a lot of innovative demonstrations over the next couple years.”

So-called high-density solar also faces analysts’ scalability questions. Placing panels flat on the ground raises concerns about soil blowing onto the panels and damage from high winds or hail. Moreover, the land under the tightly packed modules can’t be used for any other purpose.

Erthos’ Flanigan counters that the system is built to withstand hail and hurricanes. The panels are robotically cleaned. And the condensed profile increases options for solar farm siting. “Say you have sensitive habitat or culturally sensitive areas on that site,” says Flanigan. “You have more freedom to avoid those specific areas.”

Despite its challenges, the energy transition continues to be powered by favorable economics. “Solar is the cheapest way of generating bulk electricity in quite a lot of countries right now,” says Chase.

And it’s critical to finds ways to both generate gigawatts of green electricity and safeguard land for other important needs, says Ileene Anderson, senior scientist and public lands director for the Center for Biological Diversity. Anderson is “cautiously optimistic” that California’s Desert Renewable Energy Conservation Plan provides a good first step. The collaborative effort earmarks nearly 400,000 acres for utility-scale clean energy development on public land in the Mojave and Colorado/Sonoran deserts — while preserving millions more for wildlife, culture, and recreation.

“A lot of work went into that plan,” Anderson says. “A lot of sitting around the table and actually listening and trying to solve the issues that came up from all sides.” The result: “We have a plan, everybody knows what the rules are, and it’s being implemented as we speak.”

Last December, after modifying their footprints to avoid sensitive natural resources, the Arica and Victory Pass solar farms that will power 132,000 homes became the first two projects to gain approval under the plan. Earlier this month, after making habitat mitigations, the 500-megawatt, 2,700-acre Oberon solar project became the third.