by Michelle Lewis: Spanish-German wind giant Siemens Gamesa has been awarded a firm order for 60 of its SG 14-222 DD offshore wind turbines, which will be installed at the 882-MW Moray West offshore wind farm in Scotland… 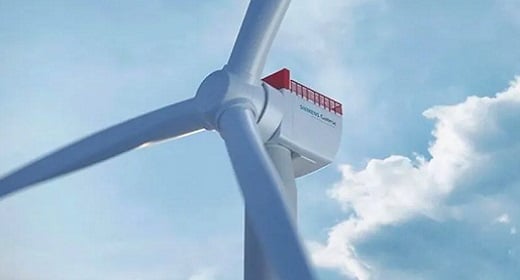 It will be the first installation of the world’s most powerful wind turbine, which has 14.7 megawatts (MW) of capacity.

A service agreement is also included in the order for the offshore wind farm, which will be located in Scotland’s Moray Firth.

All 180 Siemens Gamesa B108 IntegralBlades – that’s 60 turbines x 3 108-meter-long blades each – will be produced at the company’s offshore blade factory in Hull, England. Each SG 14-222 DD offshore wind turbine will feature a rotor diameter of 222 meters.

A rapid deployment timeline targets installation of the first machines in 2024, with first power expected to be produced in 2024.

As Electrek reported in December 2021, the SG 14-222 DD’s prototype offshore wind turbine produced its first electricity and delivered it to the grid at the test center in Østerild, Denmark.

It’s likely that Siemens Gamesa’s 14.7-MW turbines won’t hold the “most powerful” title for long. In February 2021, as Electrek reported, Danish wind turbine manufacturer Vestas announced the launch of its new offshore wind turbine – the V236-15.0MW. On June 7, Vestas announced that it had secured a conditional order agreement to supply 64 V235-15.0 MW wind turbines for EnBW’s 900 MW He Dreiht offshore wind farm in Germany in 2025.