Why We Need Rituals, Not Routines

by Terry Nguyen: How rituals can help you approach basic tasks more mindfully… 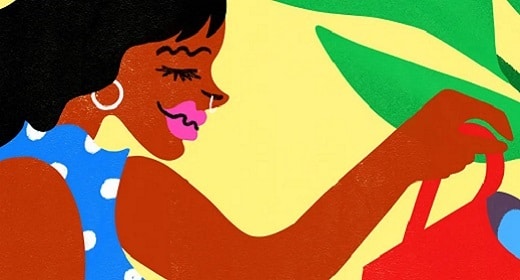 Mason Currey’s interest in rituals grew out of his inability to write without distraction. Currey, a Los Angeles-based writer, became fascinated with the working habits of famous writers, whose days were seemingly subsumed by creative work. How were they so devoted and consistent with their craft? What magical brain powers did they possess that he didn’t?

It turns out, even great writers like Franz Kafka and Virginia Woolf found writing to be an arduous task. What made the work a little bit easier, he discovered, was their commitment to a daily ritual.

In 2013, Currey published Daily Rituals: How Artists Work, a compendium of mini-biographies that documented the idiosyncratic habits and lives of artists. For the artists that Currey researched, repetition was crucial to sustaining ritual. This practice, however, is not exclusive to the creative class, nor does — or should — it only operate in the realm of work. With life returning to a new post-pandemic normal, rituals, whether personal or communal, can help enrich people’s lives.

Anyone can devise a simple ritual and integrate it into their day, week, or even month. In Zen monasteries, even ordinary activities, like bathing and eating, are ritualized and given the complete attention of practitioners. This encourages a mindful approach to basic tasks, imbuing them with a transformational ethos. It can be as simple as taking a walk at a certain time of day, baking bread, or cleaning your space. You might not feel moved or changed by a ritual the first time you attempt one; you might be self-conscious or distracted. This is where repetition or experimentation could help.

Currey’s morning ritual for writing, for example, starts with him waking up at 5:30 am. He goes to the kitchen, pours himself a cup of coffee brewed the night before, and sits down to write at his desk with the hood of his sweatshirt pulled up. Some days, the process feels more like a slog than others, but the early morning habit instills a sense of calm. The repetition ensures an easy transition to his desired writerly mindset.

Currey describes a ritual as an activity that eases a person into a focused mindset, a liminal state that is conducive for thinking, creating, or just being. “Rituals create and mark a transition towards a different kind of mental or emotional state,” he said. This can look different for every person, but it’s helpful to approach rituals as a soothing, meditative activity that allows the participant to be physically and mentally present. Here’s how to think about finding and maintaining one yourself.

What’s the difference between a ritual and a routine?

In cases like Currey’s, a ritual might resemble a common routine. (Currey confessed that his book’s original title was Daily Routines, but an editor proposed to change it to Daily Rituals at the last minute.) The difference, according to ritualists, is distinguished by one’s intent.

The word “routine” carries a connotation distinct from that of ritual. It implies a rigid sense of structure, with time management and productivity prioritized. A person might rely on routine for the sake of accomplishment — an ideal tied to capitalist ideals of labor and production — rather than personal enjoyment or spiritual fulfillment. Society is fascinated by the inner lives of highly successful people and their adherence to unyielding habits. Self-help books and articles encourage readers to emulate the ambitious morning routines of entrepreneurs, often attributing their financial success to this regimented mindset. Meanwhile, productivity tools and apps are marketed to consumers as a shortcut to optimize the self to work more efficiently.

In her seminal writing on rituals, religion scholar Catherine Bell advised against establishing a firm definition for what constitutes a ritual. While there might be differences between what’s perceived as an “authentic ritual” and a “ritual-like activity,” Bell encouraged people to focus on the specifics of the process, instead of unnecessarily limiting themselves to a defined ideal. In other words, many activities can become rituals. It depends on how a person approaches them.

Rituals shouldn’t be reduced to just mechanistic habits. The scholar Dale Wright, in his research on Zen Buddhist rituals, believed the process can facilitate the “disciplined transformation of the practitioner” in a way that mindless routine can’t. One can think of rituals, then, as a spiritual predecessor to routine.

Rituals can be an artistic process, a meditation, a communal celebration, or a simple act of observation, according to Kate Southworth, a London-based artist whose works are rooted in ritual. “Rituals often have an intention,” Southworth said. “I think the framing of that intention to be as important as its enactment.” It’s a form of resistance, she added, “to let go of the rational mind of habit and routine.”

I became fascinated with devising my own daily rituals after reading The Disappearance of Rituals, by German philosopher Byung Chul Han. Rituals stabilize life, Han argued. They are “temporal technologies for housing oneself,” and provide a mental refuge from the ceaselessness of social media and our fast-paced world. For me, this refuge came in the form of an early morning yoga practice. It is one of the first things I do after waking, in order to ground myself in my body. I don’t play music or perform a specific flow, although I follow a series of familiar stretches and movements.

Han writes extensively about the decline of collective ritual in secular societies, but he doesn’t propose a return to the old ways of ritualizing. Instead, he encourages readers to form new rites that are resistant to becoming commodified.

Southworth stresses that you don’t have to buy anything or pay money to partake in a ritual (unlike, say, a skin care regimen). In fact, she encourages people to get creative with objects they already possess or existing habits. She points to her practice of collecting rainwater as an example that requires little doing from day to day. Once Southworth accumulates enough rainwater, she mixes it with some nut milk and waters her plants. “It’s the small, very purposeful acts that draw my attention to what’s going on in the outside world,” she said. “Rituals deal with the unconscious, with making these connections to others or nature through art or an activity.”

Your ritual might seem silly or odd to others, but that shouldn’t discourage you

When a ritual is written out or explained, the activity can seem overly simplistic or fruitless to outsiders. The best way to understand a ritual, according to practitioners, is to engage with it, even if that participation is limited to empathy. “From an outsider’s perspective, the rites performed by others will always seem hollow and devoid of meaning just by virtue of one’s distance from them,” wrote Wright, the Zen Buddhist scholar.

This could be because rituals historically carried religious or spiritual undertones, and were often performed in community with others. In line with Han’s argument that collective rituals are disappearing (at least in a Western context), Currey acknowledged that his approach to rituals places an onus on individuals to come up with what works for them. Some artists are even hesitant to describe their process as ritual, even though their described behaviors follow the same patterns. “There’s not much ritualizing that we inherit, so we have to make it up for ourselves,” he said.

As a result, these practices are highly personalized and might not apply or even make sense to others. The writer Ingrid Rojas Contreras always wears a garment in a distinct “muted blue ultramarine” shade when working, as picturing the color helps her to concentrate and enter “a somnambulistic trance.” The director David Lynch meditates twice a day in 20-minute sessions, a practice he has maintained daily since 1973. And the novelist Toni Morrison would wake at 5 am, make coffee, and watch the sun rise. Witnessing the early sunrise enabled her to write, she told the Paris Review: “This ritual comprises my preparation to enter a space that I can only call non-secular.”

For these artists, rituals are inseparable fro

Not all rituals have to be daily endeavors. Rituals can also be enacted around certain astrological or calendar-based events, like the full moon or summer solstice. (Some of our modern holidays, like Easter and Halloweenm their creative output — which, in turn, are tied to their livelihoods. Yet rituals can be wholly separate from any form of labor that can be monetized. Making a bowl of oats can be a morning ritual. So can activities like journaling or reading a poem., borrow from pagan celebrations, which had elements of ritual.)

Southworth follows a ritual calendar that is informed by ancient Celtic festivals and pagan solstices, and likes to perform rituals to mark the transition from one season to the next. Her winter solstice ritual last year took place over the course of three days: Southworth created a charcoal sketching on the first day, rubbed some of it out on the second, and sat with her drawing at dusk to welcome the darkness of the solstice. “Enjoy the deepness, stillness and quietness of the darkness,” she wrote on an instructional blog. “When you are ready, light a candle to welcome the return of light.”

Experiment and have fun with it. People change, and rituals can, too.

Whether it’s a daily or celebratory ritual, Southworth encourages people to experiment. “Trust your gut instinct if a ritual works right for you, and change things so that it feels good,” she said. Make sure to have some context for the ritual or an idea of why you’re performing it. Intent — and in some cases, repetition — is key. While Southworth has published her own ritualistic guides, she doesn’t think that rigid rules are necessary. Rather, what’s important is the mindset that the participant brings to the practice.

A ritual might not always produce the participant’s sought-after effect, especially with their first few attempts. For Zen Buddhists, the repetitive nature of ritual action conditions the body so that the desired mental state will follow. Southworth offers a more fluid, beginner-friendly approach for casual ritualists. “Think of it as a way of letting go of the everyday,” she said. “A ritual is like a poem. There’s no wrong or right way.”