by Peter Diamandis: What if we had a permanent fix for one of the leading contributors to heart disease, the world’s single biggest killer? 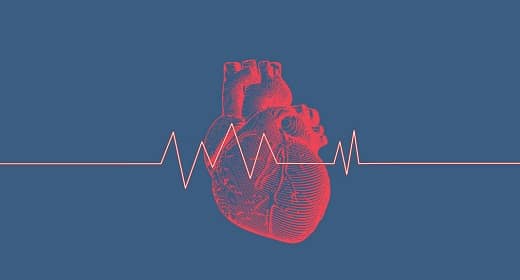 Heart disease accounts for roughly 16% of total deaths globally each year. It also costs the US economy roughly $219 billion a year.

One of the main factors for developing heart disease is high levels of cholesterol in the bloodstream. That’s why more than 200 million people worldwide regularly take statins, the leading medication for lowering cholesterol levels.

These drugs have proved effective, but they require consistent use and can result in side-effects.

We’re now closer than ever to a solution.

Scientists have long known a gene that codes for a protein called PCSK9 plays a key role in regulating cholesterol levels in the bloodstream. Earlier this month, a revolutionary new CRISPR-based therapy that can switch off the PCSK9 gene started its first human trials.

In today’s blog, I’ll explain what this exciting new treatment could mean for human health and longevity, and examine the broader potential for this new approach to gene-editing in humans. 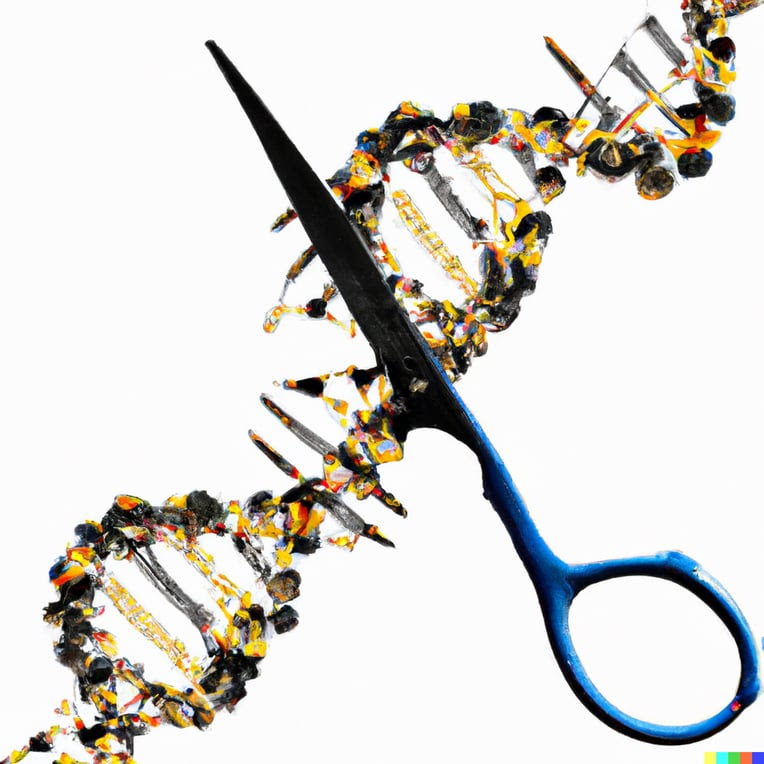 Image credit: The above image was created using OpenAI’s DALL-E neural network using the prompt: “Scissors composed of molecules cutting a DNA double helix in the style of Salvador Dali”

The role of PCSK9 in heart health was first established in the mid-2000s by pioneering work from researchers at the University of Texas Southwestern Medical Center. They discovered that people with mutations in the PCSK9 gene that inhibit the protein’s production had remarkably low levels of low-density lipoprotein (LDL), otherwise known as “bad” cholesterol.

And the impact of this single protein is massive. In a subsequent study, the UT Southwestern researchers discovered that mutations in the PCSK9 gene were associated with 15%-to-28% reductions in LDL levels and a 47%-to-88% lower risk of heart disease.

This set off a scramble to find drugs that could target this troublesome protein. However, that has proven challenging due to a scarcity of binding sites on its surface that small molecules could latch onto to disrupt its function.

However, these drugs are much more expensive than statins due to their complicated production process. During their first year on the market, only one third of patients with a prescription actually received the therapies due to insurance rejections or high copays.

But what if, rather than trying to tackle PCSK9 directly, we just cut it off at the source?

If we could introduce mutations to the PCSK9 gene similar to those found in the patients of the UT Southwestern researchers, it should be possible to replicate their resistance to heart disease.

Gene-editing in humans is a complicated and risky process though. While the emergence of the CRISPR-Cas9 system has revolutionized our ability to tweak genomes, it has accuracy and safety concerns that have limited its applicability in medicine.

That’s because the standard Cas9 enzyme cuts both strands of DNA at the target site before relying on the cell’s internal repair system to stitch it back up. This process isn’t always perfect and can lead to unintended edits to the DNA that not only reduce efficacy, but could also potentially introduce harmful mutations.

However, an emerging approach known as base editing gets around this problem by using a modified Cas9 enzyme that only breaks one DNA strand. This is spliced to another enzyme that can convert one DNA letter to another. While the approach can only make single letter edits, it is much more precise and creates significant promise for medical applications.

And by a stroke of luck, it turns out that the gene responsible for the world’s biggest killer can be switched off with a simple one-letter edit. This is a big deal, because diseases caused by single point-mutations like this are relatively uncommon.

This prompted a company called Verve Therapeutics to design a base editor that switches out a single letter in the stretch of DNA encoding for PCSK9, which essentially turns the gene off. Last year, they reported in the journal Nature that when they injected the therapy into the livers of monkeys it reduced their LDL levels by 60%.

Following those promising results, the company has now moved into clinical trials and earlier this month a volunteer from New Zealand became the first person to undergo the therapy. Initially, the treatment will be given to 40 people with an inherited condition called familial hypercholesterolemia that leads to extremely high levels of LDL.

The reason for focusing on this group is that they are at high risk of dangerous heart disease, so the benefits of the therapy should outweigh any potential risks. But the hope is that ultimately this treatment could be rolled out as the standard approach for dealing with heart disease.

“If this works and is safe, this is the answer to heart attack—this is the cure,” Verve’s CEO Sekar Kathiresan told MIT Technology Review.

The therapy has a lot going for it. Unlike statins or monoclonal antibodies, in theory this should be a one-and-done treatment because it will make permanent changes to liver cells that stop them from producing PCSK9. These edits should also be passed onto the next generation of cells, because these are created by the old cells dividing. That should mean that even if the therapy is expensive, its lifetime costs will still compare favorably to the alternatives.

The base editing components are also delivered to the liver cells in lipid nanoparticles—the same technology used for mRNA Covid-19 vaccines. Thanks to the pandemic, the facilities required to manufacture this kind of therapy have already been scaled up, which should help further lower prices.

It’s important to remember that it’s still early days, and even if the therapy is successful in these early trials, it is likely to be many years until the company has amassed enough safety data to convince regulators to approve it as a treatment for run-of-the-mill high cholesterol.

But if this does turn out to be a permanent fix for the world’s single biggest killer, it would be one of the most transformational innovations in human health and longevity we’ve seen in decades.

Beyond the potential to cure heart disease, this news is also an exciting milestone in the clinical application of genetic-engineering.

Current base editing technology is capable of tackling about 60% of single-point mutations known to cause disease, and the field is undergoing significant innovation that could widen the scope of what these therapies could treat.

Another company called Beam Therapeutics is about to start human trials of a base editor designed to treat the genetic blood disorder sickle-cell disease. But it’s also working on therapies that use base editors to make multiple single letter changes to solve more complex problems.

Companies like Wave Life Sciences are experimenting with using base editors to modify RNA rather than DNA, which could make it possible to make transient changes to how genes are expressed rather than permanent alterations to the genome.

Most excitingly, the researcher who first developed base editing, David Liu from the Broad Institute of MIT and Harvard, has continued innovating. In 2019, he and his colleagues outlined a new approach called prime editing in the journal Nature, which dramatically increased the scope of potential edits.

Like base editing, the technique only breaks a single DNA strand, but in addition to making edits to individual letters it can also replace entire stretches with new genetic sequences. The team predicts that, in principle, it should be able to correct up to 89% of mutations associated with diseases in humans.

Given the pace of innovation in this field, this probably won’t be the final word in genetic engineering either.

Indeed, all signs point to a near future where genetic diseases become entirely curable.

JOIN ME TO LEARN MORE ABOUT CRISPR & OTHER LONGEVITY TECHNOLOGIES

This September 14-18, 2022, I’m taking a group of VIP entrepreneurs, investors, and longevity-focused individuals on what I call my “Platinum Longevity & Vitality Trip” to San Francisco and San Diego.

The Trip will be a luxury, 5-Star deep dive to meet with the top scientists, CEOs, clinical-stage biotech companies, and research institutes leading the charge against age-related diseases and extending the human healthspan.

We’ll learn the fundamentals of CRISPR technologies and get a look at the latest CRISPR diagnostics and therapeutics focused on / addressing age-reversal and treating illnesses such as heart disease.

The Trip is capped at 35 participants. If you join, I’ll be there to assure you have a hyper-personalized, action-packed program. My mission is to give you first-hand exposure to the major players, scientists, companies and treatments in the longevity and vitality arena.

What you get: All your questions answered. First-hand insights and early access to diagnostics, therapeutics, and investment opportunities.