A Conversation With Dr. Timothy Leary

Sid: I read Ronald Siegel’s book Intoxication (Dutton, 1989) which I found very interesting. He described drug experiences as just a natural part of all evolution, and even in the wild, animals … 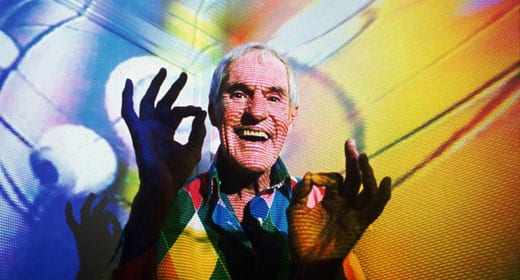 Dr. Timothy Leary: Well, I wouldn’t call it “drug” … if a bear is running through a grain yard, eating and drinking up all those fermented grains, he’s not going to the liquor store. He’s just eating what is his brain food.

SID; Right, that’s what his contention was too. Siegel said it’s natural.

TIM: Siegel explained you have to feed your brain. Your brain has certain receptor sights just like your lungs need oxygen. But, unfortunately, or maybe fortunately–but in any case realistically–there’s food around everywhere, there’s plants everywhere around so you can eat, and there’s air around in the atmosphere. But the location of brain foods varies a lot as you move around geographically. They grow here and they don’t grow there. The fact is, it’s so wonderful that the fermenting of certain vegetable products produce altered states. It’s very interesting.

SID: But it’s the intoxication effect; it’s a normal, a natural effect.

TIM: Yeah, again intoxication. The word “toxic” means poison, you understand. I have nothing against intoxication. You know, any word that the moralists want to use. You say, “Yeah I want to fuck my mind up.” I do, yeah, because it’s the only way to put chaos in, and loosen it up.

That’s great. You know this is an argument that I give to lots of people who are very much into the anti-drug, or drug-abuse movement, and they get sort of lost in their medical model …

TIM: I agree. Certainly we are.

I’m all in favor of the intelligent use of drugs, which means not at all being abusive.

SID: Well, Siegel’s argument at the end of the book was, we just need to have better drugs and know them better, and be able to use them wisely–along with everything else. I would think that you would be in agreement with that.

SID: What do you think about–from the other end of it–when people do have problems quitting drugs, or when they get addicted, or have problems? Do you think that there are particular ways that are best to help those people, versus others?

SID: Very much so, obviously.

TIM: And, everyone has their own reasons for screwing up.

SID: I believe that too.

TIM: Of course it’s almost classic–to become addicted to anything is an obvious sign of lowered self-esteem. You have no pride. You have no sense that you’re running your own ship. People who have that sense of helplessness, or laziness, or they’re just unlucky enough not to be around people that encourage them …

SID: Yeah, they’re going to get in trouble.

TIM: Yeah. People with high self-esteem–you can fall off the wagon, or smoke too much marijuana and be silly. But once you see it, and then you begin to realize it, then you become your own police. You have to become your own DEA. You’ve got to be your own FBI, your own psychopharmacologist. With the help of your friends. That’s one of the things; you have your wife or your husband or good friend to say, “Hey baby, two beers is it for you from now on.” Or, “Hey, come on, if you’re going to go to work on Monday, don’t smoke marijuana for breakfast.” But again, it goes back to common sense …
And individual needs …

… and self-esteem, and understanding no matter how fucked up you are, you can improve, as long as you … you’ve got to have someone that will be with you, because denial is so key here. You can’t kid yourself: “[in a gravelly voice] Well, I smoked marijuana too much last night, or I had too many drinks … or whatever.” You’ve got to have somebody mirror it back [holds his hand up to my face like a mirror]. But again, everything we’re saying here is common sense…. you can’t buy that. All you can do is remind people of it.

SID: I think that’s true. This may sound like a strange question. If you were a young psychologist starting off today, into research or therapy or whatever, where do you think you’d start? Do you think you’d do things differently?

TIM: Well I think the concept of psychology is really so ambiguous now … it depends upon the college and what you’d hear from the psychology department. In one psychology department, there are old guys that are still running rats like Skinner did; but in another they’re all Jungians and all they want is for you to dream and all that. You can’t generalize about psychologists. Basically, most psychologists are pretty intelligent, easy going people. They have some interest, and they’re more open minded than, probably, law students, but I’m not sure. But again, you can’t generalize. Basically, I think the concept of psychology is a 19th century profession that’s over now. It implied that, “You’re an expert, and you’re a doctor now, and there are patients, and you have to treat them.

SID: Yeah. Well that sort of gets around to another question. You’ve obviously bumped into those establishment problems over the course of your career many times. Let’s say somebody was getting into areas like NLP or hypnosis or something like that and there were people who were saying, “No, you’re controlling people’s brains and we’re going to stop you. We’re going to cut off your funding, we’re going to ruin your reputation, or whatever …”

SID: Sort of like the hens asking the foxes to protect them, huh?

TIM: Yeah. I mean if you want to go in there and talk to the Stalinists that run Washington D.C. to give you some lights, all right. But be aware of the fact that you don’t ask the Vatican to be supportive of birth control.

SID: You know it’s interesting thinking about Ram Dass [Leary’s colleague at Harvard who we discussed prior to the start of this interview]. He’s been here several times. I find him to be a fascinating guy.

TIM: He is truly a fascinating person.

SID: He tells the story about having given LSD, at an ashram, to one of his gurus and it almost had no effect …

TIM: Well that’s an old trick. He made that up.

SID: Did he really?

TIM: That’s the oldest trick–prisoners do that. You give LSD to prisoners, they’d tongue it and sell it in the yard. If you go to impress a very naive young psychologist who thinks he’s got this pill, and it cures everybody …

TIM: Listen, the rule of common sense is don’t ever take any pill from anybody if you don’t know exactly what it is. See? So the guru is simply doing what is common sense–doing what the prisoners do. There’s one thing about all of this field of altered states and frontier thinking. Any time that someone comes up with a story, that kind of boggles you, and you say “My God, that’s miraculous,” nine times out of ten they’re fucking you over.

SID: You think so?

TIM: Like being abducted [by aliens] so many times. “[Mocking, animated voice] No kidding?” “Yeah, of course something happened to me and you know the, uh, chair jumped from here to over their!” “No kidding, Wow!” Be very aware.

TIM: Yeah. Of course, that guru was something. By the way I’m not putting him down. He was a wonderful guy. One of the best gurus. But most of the gurus in India–it’s a power, master, domination thing. Most of these foolish Westerners go over there and … nothing wrong with doing it for a while to learn how it’s done and all that, but …

SID: Well, I think the Yaqui Indians perfected that pretty well too, didn’t they?

TIM: Oh yeah. Don Juan and Castaneda–it’s all just trickery. They admit it right out in front, see. I can never fault Castaneda because he was right out in front. Don Juan’s just kidding you around. And I would say Neem Karoli Baba, Richard Alpert/Ram Dass’ guru is a wonderful, wonderful man and a very intelligent man, laughing his head off … some famous doctor from New York … comes in his jeep and he’d bring him forward and say, “Gee, can I have your Jeep (heh, heh, heh)?” Just fooling around, you know? You need to say: “Yeah you can have my Jeep, but can I have your refrigerator?”

SID: So you almost have to have a bit of the “bargainer” in you–still have to remember that you’re dealing with people.

SID: Is there any wonderful question I should have asked you but didn’t? [Leary laughs] I’m sure there’s a whole bunch of them. I see that sly smile come out.