by Brianna Navarre and Megan Trimble: The Dutch triggered a political and social shift that has spread across large swaths of the globe… 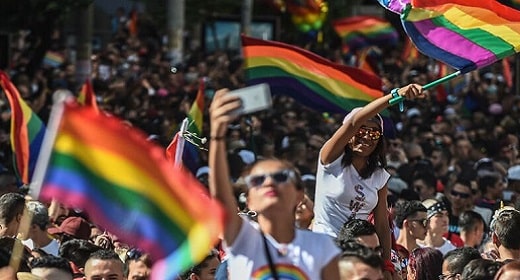 Since the Netherlands’ legalization of same-sex marriage in 2000, more than two dozen countries have followed in the path they blazed for LGBT rights in the 20 years since the law’s passage. 2021 in particular has seen leaps in the realms of same-sex marriage and parental rights.

A decision made this week by the European Court of Justice has furthered the rights LGBTQ families in the European Union.

The court ruled that all countries in the European Union must recognize a child’s parental relationship if another member state has already done so. Though the landmark ruling doesn’t legalize same-sex unions across the EU, it represents a step forward in breaching the east-west split over LGBTQ rights.

As of December 2021, 31 countries across the globe have legalized same-sex marriages nationally or regionally through legislation or court decisions. Despite continued prohibition in South and Central Asia as well as many African nations, there’s hope that the tides will turn in countries such as the Philippines where candidates supporting same-sex marriages and civil unions are increasingly present in elections.

Here are the countries that have legally recognized same-sex marriage, according to the Human Rights Campaign and other sources.

Chile’s Congress voted to legalize same-sex marriage in the Latin American country. The vote was the culmination of a four-year effort beginning with the introduction of a bill in 2017.

Switzerland held a countrywide referendum on the questions of legalizing same-sex marriage and these couples’ right to adopt. The referendum was passed with nearly a two-thirds majority at 64.1%.

Following a push by the Inter-American Court of Human Rights in 2018, Costa Rica’s supreme court ruled that the ban on same-sex marriage was unconstitutional and would be nullified automatically in 18 months if congress took no action. So, at midnight on May 26, 2020, same-sex marriage was legalized in Costa Rica, making it the first country in Central America to do so.

Ecuador legally recognized same-sex marriage after a majority of judges in highest court ruled in favor of a gay couple suing the country’s civil registry. The couple’s marriage request had been denied due to their orientations. However, the ruling did not go into effect until July of that year.

Taiwanese lawmakers approved a bill legalizing same-sex marriage on the island, becoming the first Asian country to do so. The bill’s passage came nearly two years after the country’s Constitutional Court found a law defining marriage only as being between a man and a woman to be unconstitutional.

Austria’s high court ruled that barring couples from marrying on the grounds of sexual orientation is discriminatory. Beginning in 2010, same-sex couples were permitted to form civil partnerships and adopt children. Legalization officially went into effect beginning on Jan. 1, 2019.

Australia’s Parliament voted to legalize same-sex marriage following a postal survey that showed Australian citizens were largely in support of the change. Lawmakers approved the measure that defines a marriage as “a union of two people” by an unchallenged majority, but four lawmakers registered their opposition.

Maltese lawmakers voted to legalize same-sex marriage across the Mediterranean island. The decision was in line with Prime Minister Joseph Muscat’s campaign promise to make such a law the first brought before Parliament in his first term.

German lawmakers voted in favor of same-sex marriage in late June 2017 in a move that was widely supported across the country. German Chancellor Angela Merkel voted against the measure, but allowed members of the conservative party to vote in favor in accordance with their conscience.

In June 2015, the U.S. Supreme Court ruled that the 14th Amendment requires states to grant marriages to gay couples and/or recognize those marriages performed by other states. The split decision followed a shift in American public opinion in support of such marriages.

Greenland passed a bill legalizing same-sex marriage in May 2015. The island, which is a semi-autonomous region of Denmark, was not previously subject to that country’s same-sex marriage law passed in June 2012.

Ireland legalized same-sex marriage through a popular referendum in late May 2015, making it the first country to legalize such marriages by popular vote. In 2017, Leo Varadkar was elected as the country’s first openly gay Irish Prime Minister.

Finland’s Parliament passed a bill to legalize same-sex marriage in November 2014, and Finnish President Sauli Niinisto signed the bill into law in February 2015.

Same-sex marriage became legal in Luxembourg on Jan. 1, 2015, following a bill passed by the country’s Chamber of Deputies in June 2014. Prime Minister Xavier Bettel, who is openly gay, supported the measure and became the first leader of the European Union to marry his partner.

The Scottish Parliament passed a bill allowing same-sex marriage in February 2014 and the law took effect later that year. Same-sex couples, who were previously permitted to enter civil partnerships, began to marry in late December. The measure was passed by a separate legislative body than that of England, Wales and Northern Ireland.

Queen Elizabeth II gave her royal assent to a provision legalizing same-sex marriage in England and Wales in July 2013. The British Parliament had passed the measure the day before her approval. The law was a priority for then-Prime Minister David Cameron.

Former French President Francois Hollande gave final approval to a bill to legalize same-sex marriage in May 2013, signing the measure that had met great challenges from the country’s conservative opposition party. The country’s high court ruled the bill was constitutional in the lead-up to his signature.

New Zealand’s Parliament officially approved a bill to legalize same-sex marriages in April 2013. The measure received royal assent days later, and the approval made the country the first in the Asia-Pacific region to allow same-sex couples to marry.

Uruguay followed Argentina as the second country in Latin America to legalize same-sex marriage when former President Jose Mujica signed the country’s bill into law in early May 2013. Previously, the nation had allowed same-sex couples to enter civil unions.

Denmark’s Queen Margerethe II gave her royal assent to the country’s same-sex marriage bill days after Denmark’s legislature passed the legislation in June 2012. The country was the first to recognize same-sex domestic partnerships in 1989.

Portugal officially legalized same-sex marriage in June 2010 when its law took effect. That law was first passed by the Portuguese Parliament in February 2010, reviewed by the country’s high court in April and ratified by the nation’s then-president in May of that year.

Iceland’s Parliament unanimously approved a bill legalizing gender-neutral marriages in early June 2010, and the bill was officially enacted by the end of the month. Icelandic former Prime Minister Johanna Sigurdardottir made history in February 2009 when she became the country’s first female prime minister and the world’s first openly gay head of government.

Same-sex marriage became legal in Sweden on May 1, 2009, following the enactment of a marriage law passed by the Swedish Parliament in early April 2009. The country had permitted civil unions for same-sex couples since 1995.

While not nationwide, same-sex marriage is performed without restriction in Mexico City, where Mexico’s Supreme Court issued a ruling in favor of same-sex marriage in 2010, saying the unions validated in the city were legal and must be accepted throughout the nation. The city had legalized gay marriage late the year before. A number of other states have followed suit, and the Mexican Supreme Court in 2015 issued a ruling making it easier for same-sex couples to marry.

Same-sex marriage became legal in Norway on Jan. 1, 2009, following the enactment of a bill passed by the Norwegian Parliament in June the year before. That 2008 law replaced a 1993 law that permitted civil unions for same-sex couples.

The push for legalized same-sex marriage in Spain largely began in 2004 under the nation’s government led by then-Prime Minister Jose Luis Rodriguez Zapatero. The next year, the country’s Parliament passed an approval bill in late June 2005 and the law officially took effect in early July.

Same-sex marriage legalization spread throughout Canada beginning in 2003 in a series of court cases. The country, though, legally recognized such marriages nationwide in late July 2005 with the Civil Marriage Act. Same-sex marriage is now widely supported.

Same-sex Dutch couples gained marriage and adoption rights in late December 2000. Parliament approved two laws, but all 20 senators from the opposition Christian Democrats voted it down. Nevertheless, the groundbreaking laws took effect the following April and set the tone for future legislation across the globe.