A New Approach to Car Batteries Is About to Transform EVs

by Mark Andrews: Auto companies are designing ways to build a car’s fuel cells into its frame, making electric rides cheaper, roomier, and able to hit ranges of 620 miles… 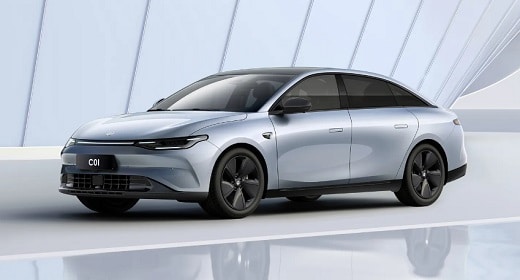 WEIGHT IS ONE of the biggest banes for car designers and engineers. Batteries are exceedingly heavy and dense, and with the internal combustion engine rapidly pulling over for an electric future, the question of how to deal with an EV’s added battery mass is becoming all the more important.

If you want to build an EV with better range, slapping in a larger battery to provide that range is not necessarily the solution. You would then have to increase the size of the brakes to make them capable of stopping the heavier car, and because of the bigger brakes you now need bigger wheels, and the weight of all those items would require a stronger structure. This is what car designers call the “weight spiral,” and the problem with batteries is that they require you to lug around dead weight just to power the vehicle.

But what if you could integrate the battery into the structure of the car so that the cells could serve the dual purpose of powering the vehicle and serving as its skeleton? That is exactly what Tesla and Chinese companies such as BYD and CATL are working on. The new structural designs coming out of these companies stand to not only change the way EVs are produced but increase vehicle ranges while decreasing manufacturing costs.

According to Euan McTurk, a consultant battery electrochemist at Plug Life Consulting, since technologies such as cell-to-pack, cell-to-body, and cell-to-chassis battery construction allow batteries to be more efficiently distributed inside the car, they get us much closer to a hypothetical perfect EV battery. “The ultimate battery pack would be one that consists of 100 percent active material. That is, every part of the battery pack stores and releases energy,” he says.

Traditionally, EV batteries have used cell modules that are then interconnected into packs. BYD pioneered cell-to-pack technology, which does away with the intermediate module stage and puts the cells directly into the pack. According to Richie Frost, the founder and CEO of Sprint Power, “standard modules may fit well within one pack but leave large areas of ‘wasted’ space in another pack. By removing the constraints of a module, the number of cells can be maximized within any enclosure.”

So cell-to-pack allows the module building blocks to be left out of a battery pack, meaning less wasted volume. BYD has also championed LFP (lithium iron phosphate) batteries, which have better chemical stability and are cheaper to produce. One problem is that the energy density of LFP cells isn’t that good compared to the NCM (nickel cobalt manganese) chemistry cells used in EVs like Hyundai’s Kona Electric, Jaguar’s I-Pace, and Volkswagen’s ID range. However, a cell-to-pack design enables the company to fit more cells into a given space and increase the density to a level closer to that achievable with NCM batteries.

Shenzhen-based BYD is one of the world’s most vertically integrated EV producers—meaning it makes the batteries, many of the vehicle components, and the cars themselves—but it actually started out as a battery company. Its biggest rival in the Chinese battery space is Contemporary Amperex Technology, a company that in 2021 was the world’s largest EV battery producer, with a 32.6 percent market share. This was largely due to CATL dominating the Chinese market with a 52 percent share.

CATL already has a plant in Germany, along with a $5 billion battery plant under construction in Indonesia and plans for a similar investment in the US. Its own investments in both lithium and cobalt mining help shield the company from commodity price fluctuations. But one of the key factors for CATL’s global expansion will be cell-to-chassis technology, where the battery, chassis, and underbody of an EV are integrated as one, completely eliminating the need for a separate battery pack in the vehicle.

Redistributing the batteries’ bulk will also free up space in a car’s design for a roomier interior, since designers will no longer need to raise the floor height of an EV to stash the cells underneath in a big slab. Freed from these previous constraints, as the cells can make up the entire chassis, manufacturers will be able to squeeze more cells into each EV, thereby increasing range.

CATL estimates that production vehicles of this design will achieve ranges of 1,000 kilometers (621 miles) per charge—a 40 percent increase over conventional battery tech.

At Tesla’s 2020 Battery Day, the company shared information about a few key advancements. While Tesla’s new 4680 battery dominated the headlines, CEO Elon Musk and senior vice president Drew Baglino outlined how production of Tesla cars was changing through the usage of large-scale die-cast parts to replace multiple smaller components. They also said that Tesla would start using cell-to-body technology by around 2023.

Using the analogy of an aircraft wing—where now instead of having a wing with a fuel tank inside, the tanks are wing-shaped—the duo said the battery cells would become integrated into a car’s structure. To do that, Tesla has developed a new glue. Normally the glue in a battery pack keeps the cells and pack plates together and acts as a fire retardant. Tesla’s solution adds a strengthening function for the adhesive, making the whole battery load-bearing.

According to Tesla, this design, along with its die-casting, could allow vehicles to save 370 parts. This cuts body weight by 10 percent, lowers battery costs by 7 percent per kilowatt-hour, and improves vehicle range.

While Tesla’s 4680 battery with its larger volume seems to play an integral role in the company’s ability to move to a cell-to-body design, CATL’s new Qilin battery boasts a 13 percent increase in capacity over the 4680, with a volume utilization efficiency of 72 percent and an energy density of up to 255 watt-hours per kilogram. It is set to become a key part of CATL’s third-generation cell-to-pack solution and will likely form the basis of the company’s cell-to-chassis offering.

For those thinking these breakthrough battery technologies are still a few years off, cell-to-chassis is in fact already here. The rapidly growing but still relatively unknown Chinese EV startup Leapmotor claims to be the first company to bring a production car featuring cell-to-chassis technology to market. Leap’s C01 sedan should go on sale before the end of 2022. Using proprietary technology, which the company has offered to share for free, Leap says the C01 offers superior handling (the better weight distribution of cell-to-chassis designs might account for this), slightly longer range, and improved collision safety.

Many EVs were previously created from the platforms of internal-combustion cars—and some still are—but the adoption of cell-to-chassis designs will make those older platforms hopelessly outclassed. According to Frost at Sprint Power, “the commitment by most [manufacturers] to an EV-only future in conjunction with more integrated designs, such as cell-to-chassis, will lead to significant improvements in the overall design and performance of EVs.”

For one thing, replacing faulty cells will be far more difficult in a cell-to-chassis housing, as each cell will be an integral part of the car’s structure. Then there is the question of what happens when the car is scrapped. Currently, modules can find their way into many second-life applications, but  McTurk believes the larger battery sizes in cell-to-pack and cell-to-chassis designs may limit them to grid-storage applications.