by Taylor Rains: Air Canada is one step closer to becoming a greener company… 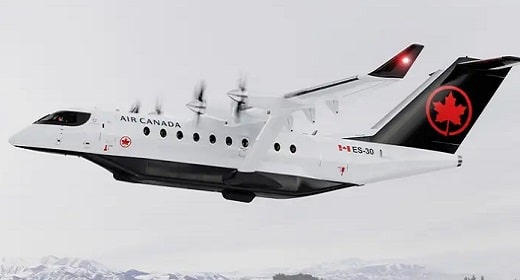 The Montréal-based airline announced Thursday that it had ordered 30 of Heart Aerospace’s ES-30 electric aircraft. Air Canada has also gained a $5 million equity stake in the Swedish manufacturer.

Scheduled to enter service in 2028, the plane is set to seat 30 passengers in a two-by-one configuration and fly up to 124 miles, or 200 kilometers, when in all-electric mode.

The range can extend to 249 miles when the battery is supplemented by generators and 497 miles when the capacity is limited to 25 people, according to Air Canada.

“Air Canada has taken a leadership position in the industry to address climate change,” Michael Rousseau, the company’s president and CEO, said in a press release. “The introduction into our fleet of the ES-30 electric regional aircraft from Heart Aerospace will be a step forward to our goal of net zero emissions by 2050.”

The move complements Air Canada’s decarbonization effort. According to Rousseau, the airline is developing sustainable aviation fuel and a carbon-capture system to reduce its CO2 emissions.

Air Canada is the second North American carrier to confirm an order for Heart Aerospace’s electric plane. In July 2021, United Airlines, with its regional partner Mesa Airlines, announced a purchase of 200 ES-19s, which is the 19-seater version of the plane. The aircraft is expected to enter service in 2026 — two years ahead of the ES-30.

The interest in electric planes comes as the industry continues to move toward more eco-friendly operations, with global carriers and aviation regulators pushing for net-zero emissions by 2050. On September 8, United announced an order for 200 Embraer Eve electric vertical-takeoff and -landing aircraft, while American Airlines placed an order for Vertical Aerospace’s VX4 eVTOL in July.

Delta Air Lines is the only major US airline to not invest in an electric aircraft.