How The Dalai Lama Is Chosen

Actually, the Dalai Lama is not technically chosen; rather, he is found. But to understand how it works, you first have to learn the basics of Tibetan Buddhism and its belief in reincarnation… 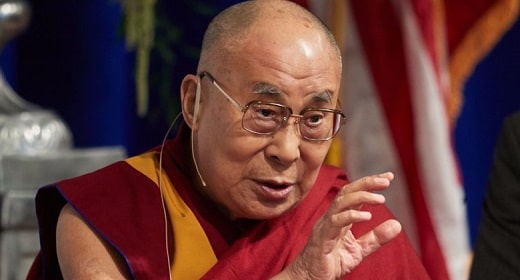 A unique variant of Buddhism, the Tibetan form draws on ancient Tibetan Bon and the Mahayana tradition, as well as its Vajrayana path. Incorporating meditation, yoga and tantric disciplines, Tibetan Buddhists avoid philosophical speculation preferring practice as a means to attain realization and ultimately Buddhahood; upon reaching perfect enlightenment, he who attains Buddhahood can choose to stop the cycle of life, suffering, death and reincarnation.

Based upon the idea that the human mind is the source of all things, Tibetan Buddhists believe that everything that is experienced really only happens inside your head. In order to reach ultimate enlightenment through the mind, however, people must gain control over the essential energy that animates all existence, prana; the primary way to tame that tiger is by controlling the mind. Adherents, therefore, take two courses on their journey to perfect enlightenment, the Path of Means and the Path of Liberation.

The first path involves a fair amount of prayers and obeisances to the Buddhas, the student’s teacher and in repentance (300,000 total); in addition, those on the Path of Means recite mantras, practice pranayama (yogic breathing), cultivate altruistic thought and ultimately train to achieve complete enlightenment to share with all sentient beings. No small task.

The second path, of liberation, sounds simple, but is supremely difficult. The student must learn to effortlessly enter and remain in a state of deep relaxation. Students seek this state, in which to become one with the primordial cosmic mind, again through mediation.

Ultimately, when one reaches the perfectly relaxed state, the two paths converge; eventually, complete enlightenment can be reached. Those who attain this state, but seek to return lifetime after lifetime out of their compassion for, and desire to benefit, all sentient beings, are called Bodhisattvas.

Reincarnation and the Tulkus

Although all variants of Buddhism have some concept of rebirth, the Tibetans have created a whole study of the subject. In The Tibetan Book of the Dead, the unique Tibetan idea that a person is not immediately reincarnated after death, but that an intermediate period exists, called the bardo, is described and explained.

In this interval, the soul passes through three stages, also called bardos. The first, chikkhai bardo, has the soul at the moment of death experiencing the “clear light of reality.” Chonyid bardo, the second stage, is where the soul sees different Buddha forms. In the third stage, sidpa bardo, the soul is reborn.

According to Tibetan Buddhists, when ordinary people die, they exercise little control over their own reincarnation, since that is governed by their karma. An individual’s karma is created by the motivations behind his actions taken over each of his previous lives, with each action creating a seed that grows to fruition in later lives. This means that, if you did something bad, or even if you did something good for all the wrong reasons, you’ll pay for it in a later life.

However, there exist an enlightened few that have transcended the sway of karma through their devotion to complete compassion for all sentient beings. Among these enlightened are a number of superior Bodhisattvas, called tulkus, who control the time and place of their future births. The most well known tulku in the world is the Dalai Lama.

As a supremely enlightened being, when a Dalai Lama shuffles off his mortal coil, he doesn’t just expire, he practices conscious dying. Called phowa, the process involves the transference of the consciousness, just at the time of death, into one of the Buddha forms, thus avoiding the bardo and reincarnating by choice.

Back on Earth, a committee of sorts comprised of High Lamas and Tibetan governmental officials begin the search for the reincarnated tulku by consulting the Nechung Oracle, the official seer of Tibet. In the past, the High Lamas next traveled to Lhamo Lhatso, made sacred to the Dalai Lamas by the promise of a spirit who resided there, Palden Lhamo, to protect their reincarnation. There, the High Lamas meditated beside the lake and experienced visions and dreams that guided their search. If the Dalai Lama had been cremated, the direction the smoke blew was also noted with great interest. Typically, it takes two to three years to find the reincarnated Dalai Lama, although with the latest, the 14th, it took four.

When the High Lamas believed they had found the reincarnated Dalai Lama, they conducted a simple test. Several articles, only some of which were owned by the previous Dalai Lama, are placed in front of the child. If he chooses the correct items, this is read as a sign, along with the previous signs and some set of secret signs, that he is the tulku.

Next, three of the former Dalai Lama’s servants who knew him well are asked to confirm the child’s identity; other officials are also required to sign off on it, too. If more than one boy is identified in this manner and a clear choice cannot be made, the names are placed in a vase, and the name drawn out is that of the person that will become the next Dalai Lama.

Upon formal confirmation, the Dalai Lama is traditionally taken with his family to the Drepung Monastery in Lhasa to begin his studies. Except for the 4th Dalai Lama, who was born in Mongolia, the Dalai Lamas were all born in Tibet.

If should be noted that the procedures for finding and identifying the Dalai Lama can be changed if approximately two-thirds of the Tibetan people decide they need changed.

Future of the Dalai Lamas

The Chinese invaded Tibet in 1949, and since 1959, when the Tibetan’s national uprising was brutally suppressed, Tenzin Gyatso, the current Dalai Lama, has been in exile. He is quoted as saying that he will not reincarnate in a body that would reside in a country that is not free, and that no legitimacy should be given to a person chosen for political purposes, particularly by officials from the People’s Republic of China. This has led to speculation that the next Dalai Lama may be born in Nepal, Bhutan or India, countries with somewhat similar cultures to Tibet.

In fact, he has even questioned whether he should continue as a tulku (i.e. reincarnate). Closer to his death, he intends to convene a group of Buddhist scholars and consult with them prior to making that decision. If he does choose to reincarnate, he opined in 1991 that he “might take rebirth as an insect or an animal – whatever would be of the most value to the largest number of sentient beings.”

Source: Today I Found Out