by Masha Finklestein: I’ve always loved reading. Whilst growing up in Siberia, my mom used to work as a bookstore manager, and in my younger years, she would always bring books home for me to read, but they were mostly fiction… 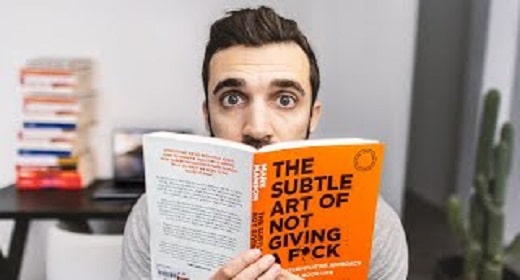 When I was 13, my desire to read self-help and psychology books formed. At the time, I became really curious about personality tests and learning more about myself, discovering who I was and why I was wired a certain way. So, I spent my time in the self-help section of bookstores, seeking out books that included personality tests and astrology.

My mom’s friend, who was a therapist, had a big influence on me in my childhood. She gave me my first psychology book called “Games People Play” by Eric Berne. It fascinated me. Because of this, I would read one book after another on the topic of human relationships—I was averaging one book per week.

When I got my hands on Carl Jung’s “Personality Types”, I realized that I could study the theory of psychology, but also do the personality tests that were included in the book. My family, on the other hand, didn’t quite share the same enthusiasm that I had for psychology and self-help books back in the ’90s. They thought it was a waste of time because in Siberia, where I grew up, psychology wasn’t a well-paid profession. So my family helped me to see that a psychology degree may not get me as far as I wanted to go.

After my sophomore year, I moved to the U.S. at the age of 18 and transferred to the University Of California in Santa Cruz to study molecular biology. The move prompted a series of panic attacks while I was in college because it was such a big transition. I remember the first attack occurred shortly after I moved to Santa Cruz. I was studying for my finals when suddenly my heartbeat sped up and the whole world started to seem unreal. It was very scary, so I went to the medical center, where the doctor confirmed that it was, indeed, an anxiety-induced panic attack. Following this, I learned all I could about anxiety and panic attacks. Books like “Anxiety & Panic Attacks” by Robert Handly helped me learn to cope with them.

I graduated college when I was 20. I wasn’t a huge fan of biology but decided to give it a shot and see if I’d like it more if I got paid for it. But I didn’t, so I pivoted into marketing because I was always interested in human interaction.

It was then that I began reading the majority of the self-help books that shaped who I am now at the age of 39. After graduating, I rented a studio in the San Francisco Bay Area. Even after switching my career to marketing, I still didn’t feel happy. I decided my sadness must have something to do with my parent’s divorce that took place when I was 4 years old, and the lack of clarity around what my life’s purpose was.

When I was 22, I started seeing a therapist and continued reading all the books I could find on relationships, life’s purpose, and meaning. The two books that gave me strength during that time were Viktor Frankl’s “Man’s Search for Meaning”, and “Becoming Attached” by Robert Karen. I learned that people with anxious attachment styles, something I had learned about myself, need to be fulfilled and have a purpose. I realized then that I needed to do things that brought me joy.

Therapy helped me process my feelings about my parent’s divorce and as a result, I stopped using it as an excuse for my sadness. Instead, I researched and became even more curious about the human brain. My focus started to shift from blaming my circumstances and my upbringing for my unhappiness, to taking responsibility for my own life. It gave me power. One of the books that helped a lot with that is “Pulling Your Own Strings” by Wayne Dyer. It helped me pinpoint that, in my view, I am solely responsible for my well-being.

From then on, whenever I had any issue, I found a book about it. Whether my question was about relationships, kids, or finance, there was always something to read. I was reading so many self-help books that they started blending into one big self-help pool of knowledge in my mind. I started to notice common themes.

One overarching theme that constantly came up was the idea that we were all subconsciously driven by fear. For example, the fear of hurting someone can make us filter the way that we are with that person, or how we tell them what we want and what we don’t want. The fear of being alone can drive and change our behavior, in the hope of trying to avoid that feeling.

It took years of therapy and loads of books to understand that I was good enough, as I am, without trying to alter myself. Tara Brach’s “Radical Acceptance” played a part in my learning to accept myself as I am.

The more I read, the better I felt about my life. My panic attacks diminished over time as I better understood the fears behind them. I learned about catastrophic thinking from the book “Full Catastrophe Living” by Jon Kabat-Zinn and started to become more aware of my own thinking traps. I got better and better at catching myself whenever a destructive thought crossed my mind. I knew then that I had a choice on how to respond to the thought. I was the one who decided what to do next. Often, I chose to breathe through the fear and move on.