Major Schools of Thought in Psychology

by Kendra Cherry: When psychology first emerged as a science separate from biology and philosophy, the debate over how to describe and explain the human mind and behavior began… 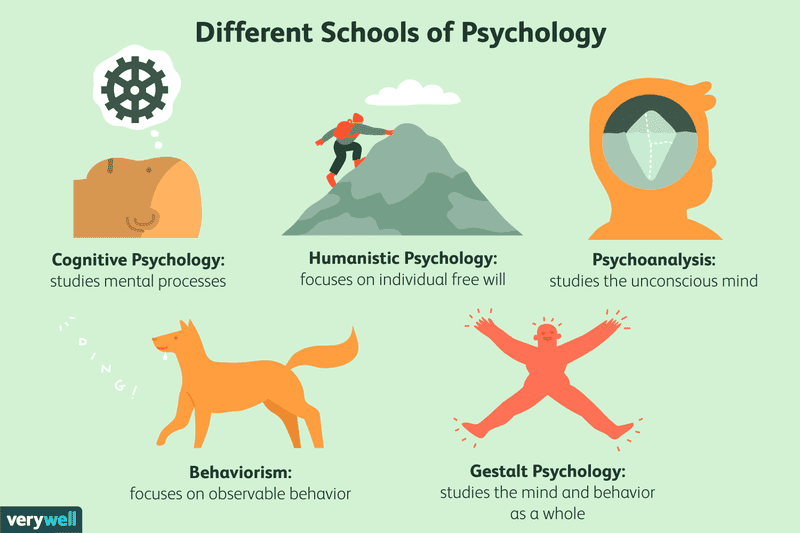 The different schools of psychology represent the major theories within psychology.

The first school of thought, structuralism, was advocated by the founder of the first psychology lab, Wilhelm Wundt. Almost immediately, other theories began to emerge and vie for dominance in psychology.

In the past, psychologists often identified themselves exclusively with one single school of thought. Today, most psychologists have an eclectic outlook on psychology. They often draw on ideas and theories from different schools rather than holding to any singular perspective.

This article discusses some of the major schools of thought that have influenced our knowledge and understanding of psychology.

The Structuralist School of Thought

Structuralism is widely regarded as the first school of thought in psychology. This outlook focused on breaking down mental processes into the most basic components. Major thinkers associated with structuralism include Wilhelm Wundt and Edward Titchener.

The focus of structuralism was on reducing mental processes down into their most basic elements. The structuralists used techniques such as introspection to analyze the inner processes of the human mind.

The introspective experimental technique used by the structuralists involved having trained observers examine their inner responses. Using this approach, also known as experimental self-observation, experimenters like Wundt trained people to analyze their thoughts as carefully and objectively as possible.

While these methods were understandably not the most empirically rigorous, the structuralist school of thought played an important role in the development of experimental psychology.

The Functionalist School of Thought

Functionalism formed as a reaction to the theories of the structuralist school of thought and was heavily influenced by the work of William James. It functioned on the mind’s functions and adaptations.

Instead of focusing on the mental processes themselves, functionalist thinkers were interested in the role that these processes play.

In a functionalist approach, for example, instead of trying to understand the underlying processes that cause mental states, the focus would be on understanding the function that those states serve. Gaining a better understanding of the purpose would allow psychologists to better understand how the mind allows people to respond and adapt to their environments.

The functionalist school was interested in the purpose of thoughts and behaviors, whereas structuralism was concerned with the elements that make up consciousness. While functionalism largely disappeared as a school of thought, its influence persisted in applied psychology, behaviorism, and educational psychology.1

Unlike some of the other well-known schools of thought in psychology, functionalism is not associated with a single dominant theorist. Instead, a number of functionalist thinkers are associated with this outlook, including John Dewey, James Rowland Angell, and Harvey Carr.2

Some historians have questioned whether functionalism should be considered a formal school of psychology, given its lack of a central leader or formalized ideas.3

The Gestalt School of Thought

Gestalt psychology was a school of psychology based upon the idea that people experience things as unified wholes. This approach to psychology began in Germany and Austria during the late 19th century in response to the molecular approach of structuralism.

Instead of breaking down thoughts and behavior to their smallest elements, the gestalt psychologists believed that you must look at the whole of experience. According to Gestalt thinkers, the whole is greater than the sum of its parts, a philosophy known as holism.4

Some examples of Gestalt thinking include explanations for optical phenomena, such as visual illusions. Wertheimer described the phi phenomenon by observing how alternating railway lights created the illusion of movement. The phenomenon suggests that a succession of images seen in rapid sequence are perceived as moving.5

The Behaviorist School of Thought

Behaviorism became a dominant school of thought during the 1950s. It was based upon the work of thinkers such as John B. Watson, Ivan Pavlov, and B. F. Skinner.

Behaviorism suggests that all behavior can be explained by environmental causes rather than by internal forces. Behaviorism is focused on observable behavior. Examples of behavioral theories that emerged during this time include:

The behavioral school of psychology significantly influenced the course of psychology. Many ideas and techniques that emerged from this school of thought are still widely used today. Behavioral training, token economies, aversion therapy, and other methods are frequently used in psychotherapy and behavior modification programs.

The Psychoanalytic School of Thought

Freud believed that the human mind was composed of three elements: the id, ego, and superego.

Freud believed that the interaction of these three elements was what led to all of the complex human behaviors.

Other important theories within the psychoanalytic school included the idea of the conscious and unconscious, Freud’s psychosexual approach to personality development, and the concept of life and death instincts.

Freud’s school of thought was enormously influential, but also generated considerable debate. This controversy existed not only in his time but also in modern discussions of Freud’s theories.

The Humanistic School of Thought

Humanistic psychology developed as a response to psychoanalysis and behaviorism. The development of this school of thought in psychology was heavily influenced by the work of humanist thinkers such as Abraham Maslow, Carl Rogers, and Clark Moustakas.

While early schools of thought were primarily centered on abnormal human behavior, humanistic psychology differed considerably in its emphasis on helping people achieve and fulfill their potential. Humanistic psychology instead focused on topics such as:

Humanistic psychology remains quite popular today and has significantly influenced other areas of psychology including positive psychology. This particular branch of psychology is centered on helping people live happier, more fulfilling lives.

The Cognitive School of Thought

Cognitive psychology is the school of psychology that studies mental processes, including how people think, perceive, remember and learn. As part of the larger field of cognitive science, this branch of psychology is related to other disciplines such as neuroscience, philosophy, and linguistics.

Cognitive psychology emerged during the 1950s, partly as a response to behaviorism. Critics of behaviorism noted that it failed to account for how internal processes impacted behavior.

Examples of theories that grew out of the cognitive school of thought include:

Cognitive-behavioral therapy (CBT) was also heavily influenced by this psychological perspective. CBT is an approach to treatment that focuses on how automatic negative thought patterns influence behavior and psychological problems.9

This period is sometimes referred to as the “cognitive revolution” as a wealth of research on information processing, language, memory, and perception began to emerge.

A Word From Verywell

While some schools of thought have faded into obscurity, each has had an influence on the course of psychology’s development. Some more recent schools of psychology, including behaviorism and cognitive psychology, remain highly influential.

Today, many psychologists do not align themselves solely with a single school of thought. Instead, they may take a more eclectic approach, drawing upon many different perspectives and theoretical backgrounds.