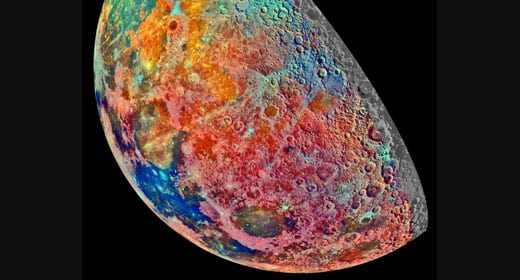 On October 18, 1989, NASA launched the Galileo orbiter spacecraft. On its way to study Jupiter and its many moons, the orbiter made numerous notable discoveries along the 2.4-billion-mile journey through space before finally reaching the Jovian system in December 7, 1995. From imaging Venus’s clouds in infrared in 1990 to snapping the northern regions of Earth’s closest cosmic companion, the moon, Galileo left behind an impressive legacy.

NASA constructed several false-color mosaic images from a series of 53 photos Galileo took while zooming past the moon on December 7, 1992. The various colors in the pictures are striking and aid researchers in understanding the moon’s surface composition and volcanic past, NASA explains in a statement.

Galileo’s imaging system took the vibrant images using three spectral filters. The false-color mosaic highlights the moon’s various geologic features, such as meteoric impacts and what’s left of its volcanic past. Surrounding the orange oval-shaped Mare Cirsiumimpact basin towards the bottom of the image, the bright pink to reddish areas represent lunar highlands, according to NASA’s Instagram post. Highlands on the moon consist of anorthosite, a calcium-rich white rock that forms when molten lunar material cools at a slower rate. 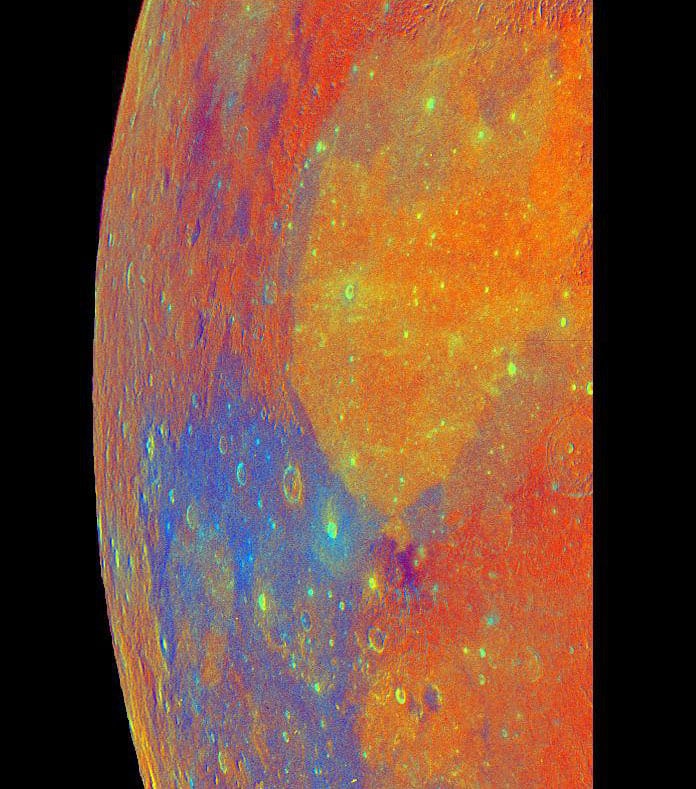 The blue to orange shades in the images indicate areas where basaltic lava flowed. For example, a dark blue spot located left of Mare Cirsium represents a feature called Mare Tranquillatis. The area, also known as the Sea of Tranquility, is where Apollo 11 landed during the lunar missions and where the first human footprints on the moon reside. Once thought to be a remanent of an ocean on the Moon, the Mare Tranquillatis is a smooth plain consisting of basaltic lavas that formed 3.9 billion years ago after an enormous impact. The crack in the crater from the impact allowed basalts to spill into the basin, creating the dark spots visible from Earth.

The dark blue area is richer in titanium than the green and orange areas above it. Thin minerals or soils seen in light blue to light green colors are a result of recent asteroid or meteorite impacts, per NASA’s Instagram post. In the image, younger craters have blue rays extending from them.

The Galileo mission ended on September 23, 2003, when it plunged into Jupiter’s atmosphere to prevent impacting the Jovian moon Europa. Currently, the Juno spacecraft launched in 2011 is orbiting the gas giant to help researchers understand the solar system’s origins, reports Mashable India.

Elizabeth Gamillo is a daily correspondent for Smithsonian and a science journalist based in Milwaukee, Wisconsin. She has written for Science magazine as their 2018 AAAS Diverse Voices in Science Journalism Intern.