by Annmarie Gianni: When looking for sun protection, more people than ever are looking for natural sunscreens without harmful chemicals and irritants… 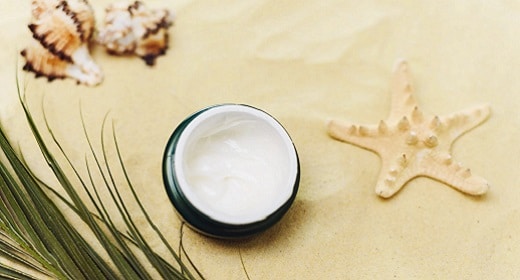 In fact, the natural sun protection products market is projected to bring in nearly $1 billion by 2030. But natural and organic sunscreens still only make up about 5–7% of the total sun care market. So what do you need to know about sunscreen to help you make the best choice for yourself and your family?

For many years now, people have been categorizing sunscreens into two groups — chemical and physical. Chemical sunscreens use man-made chemicals to reduce sun damage by absorbing UV rays.

Physical sunscreens, on the other hand, are made with natural elements and are said to block or scatter UV rays so they never penetrate the skin in the first place.

The Problem with Chemical Sunscreens

Studies have shown that a number of the ingredients found in chemical sunscreens may be detrimental to your health and have a negative impact on the environment as well. Let’s look at some of the most commonly found chemicals in sunscreens, and why you might want to think twice before rubbing one into your skin.

First discovered in the 1970s, avobenzone is one of the most widely used active ingredients in chemical sunscreens. It’s regulated as an organic, broad-spectrum UV filter.

Research has shown that the byproducts of avobenzone can cause allergic reactions and may also have hormone-disrupting effects.

One study examining sunscreen use and blood plasma concentrations showed that the body absorbs avobenzone at amounts nine times beyond the FDA threshold of 0.5 nanograms per milliliter (ng/mL). This threshold was exceeded even after a single day of sunscreen application.

Oxybenzone is frequently seen as a chemical of concern by doctors and researchers. It’s readily absorbed through the skin in significant amounts and was found in the blood of 97% of Americans tested. This is concerning because oxybenzone has been linked to allergic reactions, hormone disruption, and cell damage.

One study found that 24% of breast milk sampled contained detectable amounts of ozybenzone. And another recent paper from the Journal of Reproductive Toxicology suggests that pregnant women who use sunscreen containing oxybenzone may put their child at a higher risk of developing a birth defect known as Hirschsprung’s disease.

The American Academy of Pediatrics advises parents to avoid using sunscreens containing oxybenzone on children if at all possible. And although US sunscreen manufacturers are allowed to use it in concentrations up to 6%, the European Commission has recently published preliminary opinions suggesting that oxybenzone is unsafe in concentrations higher than 2.2%.

Homosalate is frequently used in sunscreens for its ability to absorb short-wave UVB rays.

The European Union’s Scientific Committee for Consumer Safety also recently released an opinion stating they believe homosalate is not safe in amounts up to 10% when used as a UV filter, but only up to 0.5%.

Octinoxate is what’s known as a cinnamate, a classification of UVB sunscreens related to cinnamon oil. Cinnamates are absorbed rapidly into the skin and may show up in blood, urine, and breast milk. Although octinoxate is allowed in concentrations up to 7.5%, when combined with other chemical UV filters like avobenzone, it may actually cause these particles to break down and generate harmful free radicals rather than protect against them. And both in vitro and in vivo studies have raised suspicions that octinoxate is an endocrine disruptor. Octinoxate has also been linked to allergic reactions in some individuals.

And — as if you needed another reason to watch out for this chemical — in 2021, both Hawaii and the Florida Keys banned sunscreens containing octinoxate due to their toxic effect on marine life.

Octisalate is a chemical derivative of salicylic acid that’s commonly used in sunscreens. In a recent study with five other chemical sunscreen ingredients, octisalate showed an absorption rate 10 times that of the threshold allowed for in the study. While an amount of 0.5 ng/mL was designated by the FDA as safe with a low risk of cancer, octisalate blood levels were consistently between 4.6 and 5.8 ng/mL regardless of the use of spray or squeeze sunscreen.

Another “O” to be wary of in chemical sunscreens is a compound known as octocrylene. It’s used for its ability to absorb UVA and UVB radiation. However, octocrylene is a known photosensitizer which means that when exposed to UV light, it can increase the production of free radicals in neighboring cells. Emergent data has also revealed that this chemical accumulates in marine life and can cause cellular dysfunction in coral.

Although it’s approved by the FDA in concentrations under 10%, researchers petitioned to have octocrylene sunscreens removed from the market in 2021. This call came after a recent study found that benzophenone can accumulate in sunscreens containing octocrylene over time — suggesting that octocrylene degrades into benzophenone, which is a carcinogenic endocrine disruptor.

Retinyl palmitate (also known as retinol palmitate) is a chemical compound made from vitamin A and palmitic acid. According to FDA data and research from the National Toxicology Program, retinyl palmitate may speed the development of skin tumors and lesions when applied to the skin in direct sunlight. And although this finding has been affirmed by the NTP’s Board of Scientific Counselors, the FDA has still not concluded its follow-up studies, which are intended to assess whether this chemical has a carcinogenic effect on humans.

The Benefits of Physical or Natural Sunscreens

The risks associated with chemical sunscreens are numerous, so it’s easy to see why more and more people are interested in natural sunscreen options.

Many dermatologists and other skin care experts now recommend using so-called “physical” sunscreens, which are considered safer options because they offer broad-spectrum protection and lack hormone-disrupting risks. Two of the best-known minerals used in natural sunscreens are titanium dioxide and zinc oxide.

When formulating natural sun protection, the highest priorities should be broad-spectrum protection and safety. It’s important to offer protection from both UVA and UVB rays, along with protection from free radicals, which cause premature aging.

Zinc oxide has been used as sun protection for a long time. It offers broad-spectrum protection, shielding you from both UVB rays, which cause sunburn, and UVA rays, which penetrate more deeply and may be more dangerous in terms of causing skin cancer.

Though titanium dioxide works in a similar manner in providing broad-spectrum protection, its safety isn’t as well-documented as zinc’s. Zinc is an essential mineral that we actually need in our bodies for optimal function. And zinc is the only active sunscreen ingredient approved by the FDA for infants under six months.

A number of studies have demonstrated the superiority of zinc over other types of sunscreens. Here’s a small sample:

Spray-on sunscreens have become very popular in modern cosmetics — and the appeal is understandable. The quick and easy application is favored for hard-to-reach areas or wriggling, resistant children. But the truth is that these aerosolized sunblocks may pose more risk than convenience.

Too thin a layer of sunscreen is a primary reason that chemical or physical sunscreens may not be particularly effective — and this is an especially pronounced problem for spray-on sunscreens. Researchers from Australia concluded that even a light breeze is enough to significantly reduce the effective coverage of sunscreen sprays — so much so that an entire bottle may not be enough to provide adequate protection.

Another concern with spray-on sunscreens is inhalation. The ultrafine particles of aerosol sprays can travel deep into the lungs and may have the potential to cause serious damage. Many sunscreen sprays have now been discovered to be contaminated with benzene — a cancer-causing compound that federal regulators don’t require testing for.

In July of 2021, Johnson & Johnson issued a voluntary recall of specific brands of aerosol sunscreens. The FDA also recommends using other types of sun protection like a natural sunscreen.

Many of us have come to consider the SPF, or “sun protection factor,” carefully when choosing a sunscreen. The higher the number, the more protection, right? The thing is, SPF only refers to protection from UVB rays. Because they’re responsible for sunburn, we might think that’s the only protection we need.

Yet, UVA rays are considered even more dangerous, as they penetrate the skin more deeply and are linked to skin cancer. But SPF does not measure a sunscreen’s protection against UVA rays — only UVB rays.

For example, if you usually burn in 10 minutes and you apply an SPF 15 product, you can stay out for 150 minutes.

There are some problems with this equation, though. It makes people believe that an SPF 30 would allow them to remain twice as long in the sun as an SPF 15. In truth, an SPF 15 blocks about 93% of UVB rays, while an SPF 30 blocks about 97%, and an SPF 50 about 98%. So going higher and higher doesn’t necessarily create more protection after a certain point.

In addition, these numbers have nothing to do with UVA rays, so people who slather on an SPF 50 and stay in the sun for hours are likely to suffer even more severe skin damage if they don’t have a “broad spectrum” sunscreen that protects from both UVA and UVB rays.

Studies just don’t support the idea that, past a certain point, a higher SPF provides more protection. In addition, high SPF products are often made with greater percentages of chemical ingredients, which may be linked to hormone disruption, trigger allergic reactions, and potentially expose you to more free-radical damage.

Many people believe that government agencies like the Food and Drug Administration will protect them from unsafe products. But oftentimes, these agencies do not require manufacturers to test their products for contamination.

For the most up-to-date and comprehensive analysis of the chemicals commonly found in sunscreens, take a look at the Environmental Working Group’s Annual Sunscreen Report. The EWG has a long-standing record of working to educate consumers and hold both manufacturers and regulatory agencies accountable as they reform dysfunctional chemical safety laws.

Their annual Guide to Sunscreens evaluates products based on a combination of ingredient hazard and efficacy ratings. In it, you can find rankings and recommendations based on publicly available information.

There’s no doubt that UV exposure increases the risk for skin cancer and accelerates the appearance of aging. A healthy skin care regimen should include protection. We believe we’ve found the best of all worlds with this all-natural formula: