by Vaishnavi Chandrashekhar: Warmer air is thinning most of the vast mountain range’s glaciers, known as the Third Pole 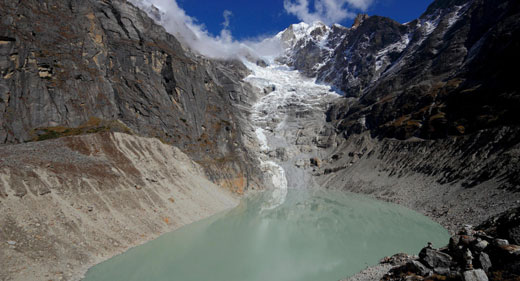 because they contain so much ice. The melting could have far-reaching consequences for flood risk and for water security for a billion people who rely on meltwater for their survival.

Spring came early this year in the high mountains of Gilgit-Baltistan, a remote border region of Pakistan. Record temperatures in March and April hastened melting of the Shisper Glacier, creating a lake that swelled and, on May 7, burst through an ice dam. A torrent of water and debris flooded the valley below, damaging fields and houses, wrecking two power plants, and washing away parts of the main highway and a bridge connecting Pakistan and China.

Pakistan’s climate change minister, Sherry Rehman, tweeted videos of the destruction and highlighted the vulnerability of a region with the largest number of glaciers outside the Earth’s poles. Why were these glaciers losing mass so quickly? Rehman put it succinctly. “High global temperatures,” she said.

Just over a decade ago, relatively little was known about glaciers in the Hindu Kush Himalayas, the vast ice mountains that run across Central and South Asia, from Afghanistan in the west to Myanmar in the east. But a step-up in research in the past 10 years — spurred in part by an embarrassing error in the Intergovernmental Panel on Climate Change’s 2007 Fourth Assessment Report, which predicted that Himalayan glaciers could melt away by 2035 — has led to enormous strides in understanding.

Scientists now have data on almost every glacier in high mountain Asia. They know “how these glaciers have changed not only in area but in mass during the last 20 years,” says Tobias Bolch, a glaciologist with the University of St Andrews in Scotland. He adds, “We also know much more about the processes which govern glacial melt. This information will give policymakers some instruments to really plan for the future.”

That future is daunting. New research suggests that the area of Himalayan glaciers has shrunk by 40 percent since the Little Ice Age maximum between 400-700 years ago, and that in the past few decades ice melt has accelerated faster than in other mountainous parts of the world. Retreat seems to have also recently initiated in Pakistan’s Karakoram range, one of the few areas where glaciers had been stable. Depending on the level of global warming, studies project that at least another third, and as much as two-thirds, of the region’s glaciers could vanish by the end of the century. Correspondingly, meltwater is expected to increase until around the 2050s and then begin to decline.

These changes could have far-reaching consequences for hazard risk and food and water security in a heavily populated region. More than a billion people depend on the Indus, Ganges, and Brahmaputra river systems, which are fed by snow and glacial melt from the Hindu Kush Himalaya region, known as the world’s “Third Pole” because it contains so much ice. Peaking in summer, meltwater can be a lifesaver at a time when other water sources are much diminished.

But increased melt may also trigger landslides or glacial lake outburst floods, known as GLOFs, scientists warn. Or it could aggravate the impact of extreme rainfall, like the deluge that caused recent massive flooding in Pakistan. Changes in melt could also affect the safety and productivity of the region’s expanding hydropower industry. Countries like Nepal already get most of their electricity from hydropower; others, like India, are planning to increase capacity of this low-carbon energy source. Around 650 hydro projects are planned or underway in high-altitude locations across the region, many of them close to glaciers or glacial lakes.

Unpredictable changes in the timing of snowmelt, which supplies water for irrigation, have led some farmers to abandon their fields.

The Indus basin, which largely falls in Pakistan and northwest India, is particularly vulnerable to long-term changes in runoff, scientists say. That’s because snow and ice melt comprise as much as 72 percent of river runoff in the upper Indus, compared with between 20 and 25 percent in the Ganges and Brahmaputra rivers (the latter two depend on monsoon rain).

Farmers in Gilgit-Baltistan are already affected, according to Aisha Khan, CEO of the Mountain and Glacier Protection Organization in Islamabad, who has been visiting the region regularly for two decades. In one village, Khan says, unpredictable changes in the timing of snowmelt, which supplies water for irrigation, have led local men to abandon their fields and migrate to cities. In another settlement, increased velocity and volume of river flow have eroded banks and swept away land. “These communities can’t afford to invest in flood and erosion protections,” she says.

Atmospheric warming is the main driver of glacier melt in the Hindu Kush Himalayas—temperatures here, as at the poles, are rising faster than the global average. But local topography and other factors may also be shaping the pace of retreat, scientists say.

The region’s glaciers are scattered across thousands of kilometers and vary greatly in size, thickness, and elevation. Some are melting faster than others. A 2020 study projected that the eastern end of the range, in Nepal and Bhutan, could lose as much as 60 percent of its ice mass by 2100, relative to 2015, even in a low-emissions scenario. By comparison, the western end, including the Karakoram and Hindu Kush ranges in Pakistan, would see slower melt rates. 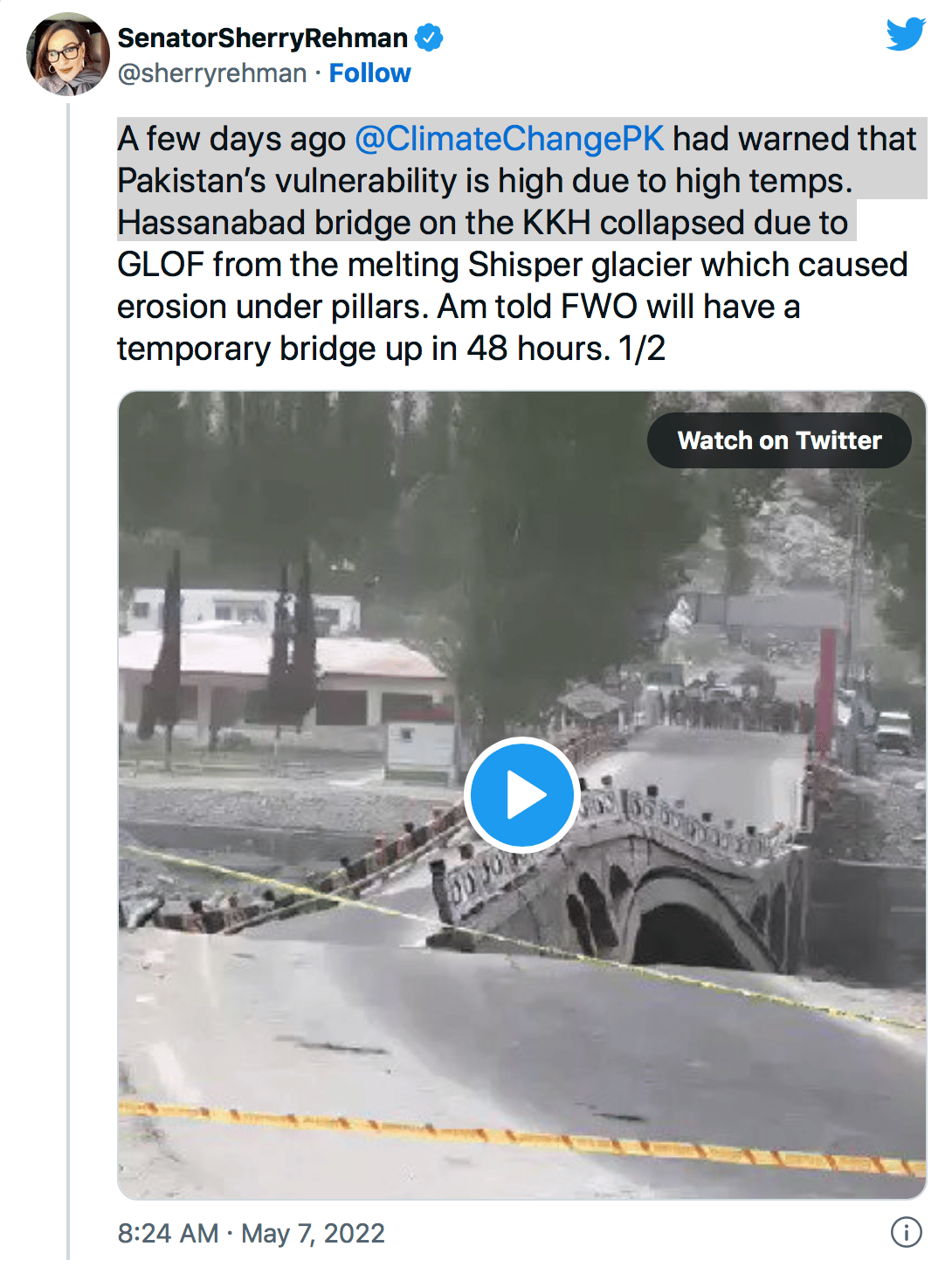 These melt patterns may have to do with regional climatic differences, says Sher Muhammad, a remote sensing specialist with Nepal’s International Centre for Integrated Mountain Development (ICIMOD), an intergovernmental institute at the forefront of climate research in the region. The eastern Himalayas are strongly influenced by the Asian summer monsoon and get more rainfall than snowfall, he notes. On the other hand, the western Himalayas, as well as the Hindu Kush and Karakoram, are more influenced by what are known as the western disturbances, which bring more snowfall. Glaciers in the west are also larger, Muhammad says, and respond more slowly to climatic changes.

But they do, eventually, respond. For decades, most glaciers in the Karakoram mountains bucked the global trend: the majority were stable, and some even grew. One reason for the anomaly was thought to be the relatively stable snowfall in the area, compared with declines in other parts of the Himalayas. But a studypublished in Nature last year found that overall acceleration of ice loss in the late 2010s had shifted even this area from “sustained thickening” to a “generalised thinning.” While this trend needs more research, the remote sensing data used in the study is of high-quality, notes Muhammad, who was not involved with the research paper. “Climate change may be ending the Karakoram anomaly,” he says.

Some studies suggest that glaciers covered by debris such as rocks and pebbles, which protects the glacial surface from the sun’s radiation, may melt more slowly. “The blanket protects the ice,” says Mohammed Farooq Azam, a glaciologist with the Indian Institute of Technology in Indore.

One study projects almost a threefold rise in the risk of lake outbursts in the Himalayas, posing a hazard to villages, roads, and dams.

Meanwhile, glaciers that terminate in a lake may melt faster, as warm water is directly in touch with the glacier’s toe, or snout. Remote sensing data show that glacial lakes have increased in number and size since the 1990s. Lake formation is an outcome of glacier melt, explains Azam. After the last ice age ended, glaciers retreated, leaving behind depressions that have only recently begun to fill with ice melt.

More glacial lakes means greater risk of glacial lake outburst floods, when land or ice holding back a lake can suddenly give way, releasing a huge volume of water. One study projects almost a threefold rise in the risk of lake outbursts in the region, posing a hazard to mountain villages, roads, and hydropower dams.

The risk of lakes bursting may be increased when glaciers “surge.” In this phenomenon, ice in the upper parts of the glacier slips or moves downward, causing the snout of the glacier to advance. A recent study by Bolch and others identified hundreds of newly surging glaciers in the region between 2000 and 2018, most of them in the Karakoram.

These glaciers can block valleys and create lakes, which is what happened when the Shisper Glacier, in Gilgit-Baltistan, began surging in 2017. The advancing ice blocked a river that flowed from an adjacent glacier, creating a new lake. “Once the water pressure is high enough, it lifts the glacier ice and then drains immediately, like a flash flood,” says Bolch. Lakes formed by this glacier burst in 2019 and 2020, and again this May. In July, government officials in Pakistan determined that unusual heat waves had contributed to 16 glacial lake outbursts in the mountains this year, compared with just five or six in previous years.

The Shisper lake outburst in May did not take any lives, due in part to a glacier monitoring system set up under a United Nations Development Programme project. Still, the timing of the outburst was not expected, says ICIMOD’s Muhamad. And with the Karakoram Highway and Hassanabad village only a few kilometers away, destruction was almost inevitable. The flood destroyed two homes and damaged 16 others, washed away farms and orchards, and knocked out the local power supply. The collapse of the Hassanabad bridge cut a key link in the remote northern region, stranding tourists and threatening food supply. Rebuilding a permanent bridge, officials said, could take up to eight months.

Despite the advances in knowledge about Himalayan glaciers, scientists say many research gaps remain. The role of black carbon, or soot, in accelerating melt is not fully known. Air pollution from the Indo-Gangetic plains is thought to be depositing black carbon on the mountains, increasing the absorption of heat and accelerating melt. There is also almost no data on permafrost, the ice that lies beneath the ground and can influence water flows and slope stability. “When permafrost thaws, the soil surface loses strength and can subside, destroying roads,” says Azam.

One reason for these gaps is the dearth of field measurements, which would help scientists understand catchment-level changes. Azam notes that there are no weather stations in India above 4,000 meters, above which most glaciers originate. Most new data are from satellite studies. “I can count on one hand the number of glaciologists working in the field,” says Azam, who studies two Himalayan glaciers.

Moreover, the measurements that do exist often don’t get shared, Bolch adds, noting, “This is a political issue.” Governments in the region need to be more collaborative, agrees Khan, in Islamabad. “If countries are isolated and don’t share, we won’t know,” she says. “We’re all part of the same region, and we all get water from the same source. Anything that happens [in one place] is going to have a cascading effect on all of us.”