As UN Climate Talks Near, A Showdown On Reparations Looms

by Fred Pearce: Developing nations have pushed demands that rich nations provide compensation for climate-caused “loss and damage” atop the agenda for next month’s climate conference in Egypt… 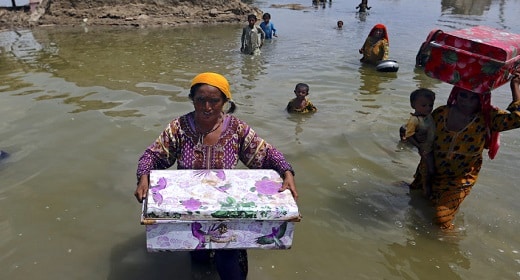 With the U.S. and EU resisting, analysts say this key issue must be addressed if COP27 is to be a success.

s the floodwaters retreated from an estimated one-third of his country in September, Pakistan’s Prime Minister Shehbaz Sharif was very clear. His heavily indebted nation should not be forced to take a “begging bowl” to rich nations, asking them to help restore his country after its worst-ever monsoon floods — not when all the evidence suggested that the cause of the floods lay with the climate change caused by those nations’ pollution.

“The enormity of this climate-induced catastrophe is beyond our fiscal means,” he said. “This is about climate justice.”

At the next international climate negotiations, in Egypt’s Sharm el-Sheikh starting November 6, where he will be co-chair, Sharif is expected to push for reparations for the “loss and damage” being inflicted by climate change on poor nations such as his.

He will hardly be alone at the conference of parties to the UN climate convention, COP27. Many developing nations are expected to join him in making the call for a new international “finance facility” to channel what some call climate reparations for the “loss and damage” they have suffered. Many analysts say the success or failure of the conference is likely to depend on how rich nations respond.

Without progress on ‘loss and damage,’ one analyst says, the climate talks “could derail right from the start.”

Climate change is becoming increasingly deadly and disruptive. This year’s mega-flood in Pakistan, along with a drought in Somalia that is extreme even by the standards of East Africa, and unprecedented heat waves across India, Europe, and China, show starkly how ever more extreme weather is creating chaos far beyond the adaptation capabilities of individuals, communities, or nations.

The blame for this is clear. The great majority of the carbon dioxide in the atmosphere that is causing the disruption has come from a handful of earlier industrializers, headed by the United States, that have been pumping the greenhouse gas into the air for a century and more.

Now, those on the receiving end — the poorest nations, who are generally least responsible for climate change and have infrastructures and economies least able to adapt — want compensation. But rich nations — especially U.S. administrations of all political stripes — have long refused to concede they should provide this. They are committed to helping poor nations reduce their emissions and to invest in ways of adapting to climate change; but they say paying compensation is a step too far.

Analysts say the issue is likely to come to a head at the start of the upcoming COP27 meeting in Egypt. The developing nations grouping known as G77 and China, currently chaired by Pakistan, says it will insist on the opening day that a new item is added to the conference agenda — to create a finance facility to compensate nations for loss and damage. 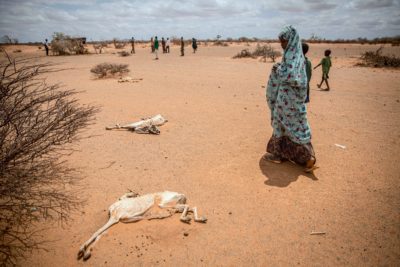 The U.S., the European Union, and others that would have to pay into this fund will have to decide whether to drop their veto and agree to the idea. It is “the number one litmus test for success as COP27,” says Preety Bhandari, of the global climate program at the World Resources Institute (WRI), a Washington-based think tank. Without progress, he says, proceedings “could derail right from the start.”

COP27 will begin with low expectations. The Egyptian hosts say negotiators must move “from pledges to implementation.” It is a tacit admission that most of the promises made at last year’s event, hosted by Britain in Glasgow, remain unmet. Analysts suggest the world is still on course for at least 2.4 degrees C (4.3 degrees F) of warming. And politicians’ minds are on other things.

In Europe, Russia’s invasion of Ukraine has given fossil fuels renewed life. Governments are seeking out new sources of fossil fuels to replace gas supplies lost from Russia. Germany, once a trailblazer in adopting renewable energy, is one of several European countries that are reopening coal-fired power plants. Meanwhile Britain, which continues to chair global climate negotiations until COP27 opens, is in financial and political meltdown, with new Prime Minister Liz Truss awarding licences to exploit hydrocarbons beneath the North Sea, promising to resume fracking on land, and even reportedly vetoing King Charles’s plan to attend COP27.

The commitments made in Glasgow are mostly languishing. All nations pledged to “revisit and strengthen” their 2030 emissions targets by the end of 2022 in order to better align them with the goals of the 2015 Paris Agreement to limit warming to close to 1.5 degrees C. But by mid-October, only 24 mostly small countries had submitted new targets. Of industrialized nations, only Australia, under a new government, has significantly upped its commitments, analysts say.

Meanwhile, the many national pledges that made headlines in Glasgow — on restoring forests, cutting methane emissions, phasing out coal, decarbonizing shipping, and more — have had few tangible outcomes. For instance, only 15 of the 119 nations that signed the pledge on methane have yet produced quantified reduction targets, according to WRI. There isn’t even agreement on how many of the pledges will be audited or measured.

China pulled the plug on the high-profile U.S.-China deal for cooperation on methane emissions reductions after Nancy Pelosi’s visit to Taiwan angered Chinese officials. And, despite many financial institutions signing up in Glasgow to make their businesses compliant with net-zero emissions by 2050, World Bank President David Malpass, a Donald Trump appointee, has been called out in recent weeks for appearing to question whether climate change is real at all. 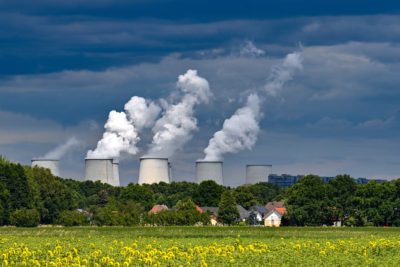 “COP27 will be an important moment for assessing progress on such deals,” Townend says of the Glasgow pledges. But now climate diplomats face a more near-term threat that could upend further progress — the growing demands of developing countries for cash compensation for the loss and damage to them caused by the emissions of developed nations.

Climate negotiators have debated calls for such compensation for many years. The term “loss and damage” first appeared in negotiated text at COP13 in Bali in 2007. The phrase covers both direct damage from extreme weather and rising sea levels, and potential economic loss from not being able to exploit reserves of fossil fuels in the way developed nations did in the past.

In May, Egypt’s finance minister Mohamed Maait gave The Guardian an example of the latter. Senegal in West Africa had recently begun developing major natural gas reserves. “Senegal [was] hoping this discovery would help them. Now you are coming to say, climate change means stopping the finance,” said Maait. Without compensation, countries such as Senegal would feel they are being punished for the actions of others, he said.

Compensation for loss and damage is seen as a necessary third pillar in climate finance for poor nations — to stand alongside investment in renewable energy and funding to help them adapt to climate change.

The U.S. and EU fear that such compensation might expose them to legal challenge for their culpability for climate change.

But while the other two pillars have received funding, albeit fitfully and inadequately, progress on loss and damage has been blocked by the U.S. and, to a lesser extent, the EU. They both fear it might open them up to legal challenge for their culpability for climate change.

As part of the Paris Agreement, the U.S. and EU did concede for the first time that finance for loss and damage might be needed. But they inserted text saying this could not provide the basis for legal liability for compensation claims. In Glasgow, they vetoed demands for a finance facility but agreed to the establishment of a three-year “dialogue” on the matter.

In the wake of escalating climate disasters such as occurred in Pakistan, and with one study estimating that the cost of loss and damage could exceed a trillion dollars per year by 2050, poor nations say their demands cannot wait. Humanitarian aid is not enough. They want recognition of their right to compensation.

“The climate crisis has pushed our adaptation limits, resulted in inevitable loss and damage, and delayed our much-needed development,” Senegal’s senior climate official Madeleine Diouf Sarr, who chairs the Least Developed Countries Group of 46 nations in climate negotiations, told the Associated Press this month. “We can no longer afford to have a COP that is all talk.” 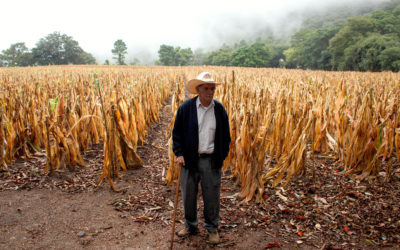 U.S. presidential climate envoy John Kerry continues to push back against the idea of a separate pot of money to compensate for the impacts of climate change. But some rich nations are shifting ground. In the wake of the Pakistan floods, Denmark became the first country to offer specific loss-and-damage funding — albeit just $13.1 million. German foreign affairs minister Annalena Baerbock said her government backed putting the issue on the agenda for COP27, and in collaboration with Egypt as conference host, appointed its climate envoy, former Greenpeace International executive director Jennifer Morgan, and Chile’s environment minister Maisa Rojas to try to find common ground. If the two fail in that task, then the disagreement could be a diplomatic bomb bursting over next month’s talks.

The row could scupper the conference altogether, analysts warn, with walkouts and boycotts. But even if that doesn’t happen, it could badly damage the trust necessary for the conference’s other work. “The politics of loss-and-damage compensation could stall and overshadow negotiations on mitigating and adapting to climate change,” says Melanie Pill, a climate policy analyst at the Australian National University.

The growing anger among poor nations over compensation is partly the result of the failure of rich nations to deliver on promises first made 13 years ago to find $100 billion annually to help developing nations cut their emissions and adapt to changing climate.

A recent study found that Africa was receiving just 11 percent of the money it needed for adaptation.

It is true that funding is increasing. The U.S., with European government partners, is brokering finance to steer some major developing nations towards low-carbon development. An $8.5 billion plan for South Africa, announced in Glasgow, could soon get off the ground, after the South African government submitted formal plans to donors this month. It should be followed by similar plans for India, Indonesia, Vietnam, and Senegal. China, meanwhile, this month set up what could be a rival “global clean energy partnership” that analysts expect will seek developing-world partners at COP27.

But the $100 billion annual target has yet to be met. And while investors are keen to fund clean-energy investment, promises of an equal commitment to helping countries adapt to climate change remain unfulfilled. A study published in September by the Climate Policy Initiative, a California-based climate finance think tank, found that Africa was receiving just 11 percent of the money it needed for adaptation.

It is also ever clearer that no amount of adaptation finance can hold back the avalanches of extreme weather plaguing the world. It is a Band-Aid in the face of life-threatening trauma. Thirty-three million Pakistanis “are paying in the form of their lives and livelihoods for the industrialization of bigger countries,” Pakistan’s foreign minister Bilawal Bhutto-Zardari said at the UN General Assembly in September. It is a charge of culpability that has yet to receive a convincing response.