Billions In Funding Could Kick-Start The US Battery Materials Industry

by Casey Crownheart: Nearly $3 billion in federal money will support the materials and parts that go into batteries, but it’s only the beginning of what’s needed… 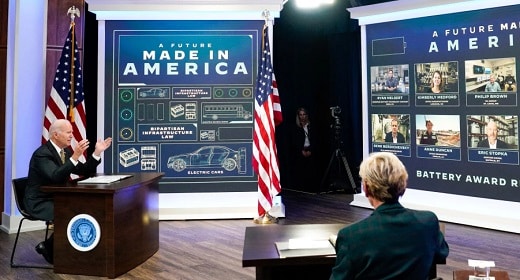 The US federal government is spending big on batteries and electric vehicles. As part of that spending spree, President Joe Biden and the Department of Energy have just announced $2.8 billion in awards to companies involved in producing the minerals and other materials that go into the batteries.

The funding will go to 20 projects, ranging from lithium processing and electrode manufacturing to battery recycling.

Both public and private funding for battery manufacturing in the US have exploded, sped by the passage earlier this year of the Inflation Reduction Act, which provides incentives for electric vehicles. Under the requirements in the new electric-vehicle tax credits, battery components must be sourced and made in the US or its free-trade partners. But much of the investment in battery manufacturing so far has been focused on later stages in the supply chain, especially factories that make battery cells for electric vehicles.

The new spending is an attempt to build out the earlier parts of the supply chain so the materials that go into a battery can also be made or sourced domestically. Making battery precursors in the US could help drive down costs for new technologies and ensure a steady supply of batteries, as well as establishing new companies and creating jobs.

The funding is a step toward “building the foundation of a domestic battery industry,” Jonas Nahm, an assistant professor of energy, resources, and environment at Johns Hopkins, said in an email.

Multibillion-dollar manufacturing plants for battery cells and EVs are popping up all over the country. But earlier parts of the supply chain are still largely based in Asia, especially China, which makes up the vast majority of global capacity for mineral processing and electrode manufacturing.

This funding announcement reflects an attempt by the US to catch up, especially for processing the minerals used to make batteries. Four of the projects that received funding are companies working to extract and process lithium, a key metal for lithium-ion batteries. The supply of lithium may need to increase by 20 times between now and 2050 to meet demand. Lithium production represents “one of the vulnerable pieces of the supply chain,” Nahm says.

Another significant focus appears to be production of lithium–iron phosphate (LFP) batteries, a lower-cost chemistry. LFP batteries differ from other lithium-ion batteries in that they don’t contain nickel or cobalt, two expensive metals that could be limited in the coming decades.

LFP technology could become a significant chunk of the battery market in the next few decades, potentially making up 40% of the global supply by 2030, according to some analysts. And the US historically hasn’t been a center of LFP battery production, says Evelina Stoikou, an energy storage associate at BloombergNEF.

While most of the projects are focused on today’s batteries, a couple of grants will fund near-term technologies that aren’t widely used yet. These include silicon-based anodes, which can increase the energy stored in lithium-ion batteries.

The scale of the funding just announced is striking—most of the grants are for hundreds of millions of dollars. And while the federal funding totals $2.8 billion, all the grants also require company investment as well. Including the private funding matches, these projects total about $9 billion.

The money could mean speedier progress in building supply chains. But “it’s not a guarantee that the projects are going to be completed,” Stoikou says. She points out that there were massive federal funding rounds for battery manufacturers in 2009, and many of those projects folded soon after.

The context today is likely different, though, Stoikou says. For one thing, batteries are a more established industry, and demand for domestically produced batteries will likely only increase, partly because of the requirements that EVs and their components be made in the US.

The new $2.8 billion in funding is part of the Bipartisan Infrastructure Law passed in late 2021, but there are also several other major funding bills that will help build other parts of the battery supply chain. There’s also funding for batteries and their supply chains in the Inflation Reduction Act, the CHIPS and Science Act that passed this summer, and even the Defense Production Act, which Biden invoked earlier this year to accelerate domestic production of clean energy technologies.

This funding will help build out the US battery industry, but there are still billions of dollars and many years ahead, says Jeff Chamberlain, CEO of battery-focused venture capital firm Volta. Still, he adds, “this looks like the beginning.”