by Jim Blackmann: There comes a point where the mind takes a leap — call it intuition or what you will — and comes out upon a higher plane of knowledge, but can never prove how it got there. All great discoveries have involved such a leap –Albert Einstein 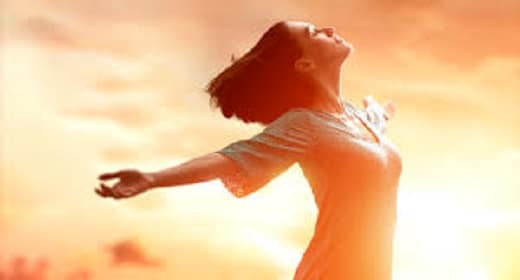 Not all inspired ideas come from scientific geniuses. Many of the early inventors were quite ordinary people. The cotton gin was invented by Eli Whitney, a school teacher. Samuel Crompton, who invented the spinning mule, was a musician. And Caresse Crosby, who invented the bra, was a publisher. And not all inspired ideas have to be ground-breaking inventions; we might be having friends over for a meal, or planning a fancy-dress party, or thinking of an opening for a presentation, but we need a new idea, and for that we need a bit of inspiration.

We have the gift of inspiration within us, and it is only a case of hearing its voice when it speaks. The problem is, much of life is routine – we wake to an alarm, catch the morning train, log on at work, grab some lunch, and then return home at night – and for that reason life can seem very uninspiring. So how do we get some inspiration back into our life?

We deal with the routine through logic. Logic will tell us to keep within our budget, not to stay out too late before an early start and take an umbrella if it looks like rain. Logic is fine for the world we know, but new ideas require a leap of the imagination, and for that we have to think about the unknown.

If we deal with the known through logic, we deal with the unknown through intuition. We use intuition to decide whether we will trust someone or not, or whether we should change our job or not, or whether we should begin or end a relationship, and we use it because such bigger decisions in life are about dealing with an unknown. It follows that, if we want to be more creative we have to focus, not on what we know, but on what we don’t know. And that’s the difficult bit – it’s like staring into a darkened room.

That is why many inspired ideas seem to come to us from some part of the unconscious mind. Carl Jung, who co-founded psychoanalysis with Sigmund Freud, wrote about the sudden arrival of such thoughts in his book Psychological Types (1923):

‘Through intuition any one content is presented as a complete whole, without our being able to explain or discover in what way this content has been arrived at.’

There are three elements to intuition. The first is gut-feeling. We meet a stranger and we have a gut-feeling about them. We hear someone make a proposal and think, ‘This feels right’, or conversely, ‘I’m not sure about this’. Our gut-feeling speaks to us whenever there is something we cannot see or cannot define, and yet we know it is there. So we resort to gut-feeling because in life we have to deal with the unknown to make our most important decisions.

The second element of intuition is about seeing the world as it is. This is called ‘isness’ in the East, and it means to see the essential nature of a thing. Too often we impose our own judgement on what we see, and when we do, everything we see is coloured by our judgement. So when we see the world intuitively, we see the world with fresh eyes. When this happens, we might see an everyday object – a flower, a person or an event – and suddenly think ‘I’ve never really noticed that before’.

The third element of intuition is insight. Insight is when a new idea suddenly occurs to us, instantly and out of the blue. While it might seem that this third element is what really leads to inspiration, in fact all three elements are needed. We are first alerted to something hidden by gut-feeling, and if we pay attention to this, we might find ourselves attending to something we had missed. Many inventions come about in this way.

James Watt (1736 – 1819) got the idea for his steam engine by observing how the steam in a kettle forced the lid to rise and fall. Others had observed boiling kettles before him, but it was his intuition that led him to the idea.

We have intuitive thoughts all the time, but – like Echo whispering to Narcissus – we don’t always hear her voice. We are too enchanted by what we see and know. To think intuitively, we have to try to silence the logical mind – at least for a while.

The physicist Fritjof Capra, who wrote The Tao of Physics (1975) after having a profound insight into the relationship between Eastern and Western thought, said that such thoughts can occur to us at any time:

‘We are all familiar with the situation where we have forgotten the name of a person or place, or some other word, and cannot produce it in spite of the utmost concentration. We have it ‘on the tip of our tongue’ but it just will not come out, until we give up and shift our attention to something else when suddenly, in a flash, we remember the forgotten name. No thinking is involved in this process. It is a sudden, immediate insight’.

So, if we are struggling to come up with an idea, whether it is for a meal or a poem or a song, we need to listen to our intuitive mind. Just as we can become better at grammar or mathematics through practice, we can become more intuitive through practice. Paying attention to sudden, unexpected thoughts can help. Silent observation – whether it is a person, an event or the mood in a room – can help. And listening to our gut-feeling can help. Each of these elements of intuition draws our attention to what is present but hidden in life.

Our intuitive mind is always there – always – but we do not hear it because we focus on what we know, rather than what we do not know. Try listening to the whispering Echo and you might be surprised what you hear.

Useful tip: keep a notepad and jot down new ideas when they arrive – they can be lost or forgotten ten minutes after they arrive. Keith Richards of the Rolling Stones, said the idea for the song Satisfaction came to him in a dream. Luckily, he had a tape recorder nearby and hit the record button. He captured the first verse, plus 40 minutes of him snoring. New ideas can come at any time.