As Evidence Mounts, New Concerns About Fracking and Health

by Jon Hurdle: Two decades after the advent of fracking, a growing number of studies are pointing to a link between gas wells and public health, 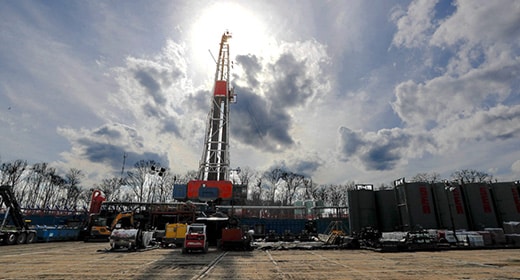 particularly among children and the elderly. Researchers are now calling for new regulations restricting where wells can be located.

Almost 20 years after the adoption of hydraulic fracturing began to supercharge U.S. production of oil and gas, there’s growing evidence of a correlation between the industry’s activities and an array of health problems ranging from childhood cancer and the premature death of elderly people to respiratory issues and endocrine disruption.

While the oil and gas industry insists its processes are safe, and regulators have set rules designed to prevent the contamination of air and water by “fracking” technology, advocates for stricter limits on the practice, or even an outright ban, point to an increasing number of studies suggesting that fracking poses a threat to public health.

A paper by the Yale School of Public Health this summer showed that children living near Pennsylvania wells that use fracking to harvest natural gas are two to three times more likely to contract a form of childhood leukemia than their peers who live farther away. That followed a Harvard study in January that found elderly people living near or downwind from gas pads have a higher risk of premature death than seniors who don’t live in that proximity.

In April, the nonprofit Physicians for Social Responsibility and Concerned Health Professionals of New York, which consists of health professionals, scientists, and medical organizations, published its most recent compendium of investigations into risks and harms linked with fracking. Since 2014, the compendium has tallied 2,239 peer-reviewed papers that found evidence of harm, with nearly 1,000 of those papers published since 2018.

More than 17.6 million people in the U.S. now live within a mile of a fracked oil or gas well.

“The risks and harms of fracking for public health and the climate are real and growing,” said the authors of the compilation. “Despite the continuing challenges of exposure assessments, the results of recent studies confirm and extend the validity of earlier findings.”

According to the 577-page document, 79 percent of U.S. natural gas and 65 percent of crude oil is now produced by fracking, with more than 17.6 million people living within a mile of a fracked oil or gas well. The result, says the report, is a public health crisis.

U.S. energy companies have been under fire from environmentalists and public health advocates since the mid-2000s, when the U.S. fracking boom got underway. The opposition goes beyond concerns that emissions from natural gas contribute to climate change. Critics say that the cocktails of chemicals injected a mile or more underground to crack open gas-bearing fissures in shale threaten groundwater supplies — including drinking water — and that diesel fumes from trucks and generators on well pads erode air quality.

Outside the United States, concerns about the safety of fracking have prompted bans in France, Ireland, and Bulgaria and have led other countries or regions to place restrictions on the practice. In late October, Britain’s new Prime Minister, Rishi Sunak, said he will continue a national moratorium on fracking for natural gas, reversing a plan by his predecessor, Liz Truss, to lift the ban in an effort to curb soaring energy prices.

The industry says its well bores are built with multiple layers of steel and concrete, ensuring that chemical-laden water can’t escape into groundwater. The Marcellus Shale Coalition, a Pennsylvania-based trade group for the natural gas industry, cites academic and government studies showing no clear evidence that fracking harms public health or contaminates groundwater with chemicals.

The coalition also argues that the increasing use of cleaner-burning natural gas, replacing coal and oil, helps to curb climate change by cutting carbon emissions. “Research confirms natural gas is safely and responsibly developed in Pennsylvania,” it said.

But the industry’s defenses are rebutted by recent research. In August, the Yale School of Public Health published a study in Environmental Health Perspectivesthat found children between the ages of two and seven living near gas wells in four heavily fracked counties of southwestern Pennsylvania are two to three times more likely to be diagnosed with acute lymphoblastic leukemia (ALL), the most common kind of childhood leukemia, than children who do not live near gas development.

A new study found an increased risk of early death among elderly people living near or downwind of fracking operations.

The study examined almost 2,500 children living within 2,000 meters (6,561 feet) of a gas well, of whom 405 were diagnosed with ALL. Children whose homes at birth were within that distance of a well were 1.98 times more likely to develop the disease than those without gas wells near their homes, the study found. Children who lived within 2,000 meters of a gas well during the perinatal window – from three months prior to conception until birth – were 2.8 times more likely to contract ALL than those who lived beyond that distance. Long-term survival rates of ALL are high, the study said, but victims may suffer associated illnesses including developmental and psychological problems.

The study suggested that people living near gas wells may be exposed via drinking water to chemicals used in fracking — more formally known as unconventional oil and gas development (UOGD) — or from spills of the millions of gallons of wastewater that is pumped out of wells during the process.

“This work adds to mounting evidence of UOGD’s impacts on children’s health, providing additional support for limiting UOGD near residences,” the paper said.

The study’s senior author, Nicole Deziel, an associate professor of epidemiology at the Yale School of Public Health, urged companies and regulators to consider increasing the distance between gas wells and homes, given that the young ALL patients were found within a distance that is more than ten times the 500-foot minimum required by Pennsylvania’s Department of Environmental Protection. “It’s time that states revisit setbacks to reflect the new research,” she said.

The Environmental Health Project, a nonprofit based outside Pittsburgh that advocates for public health in the context of shale-gas impacts, recommends setbacks of at least 0.6 miles between homes and smaller shale gas facilities like wells or compressor stations; 1.25 miles or more for larger gas facilities; and 1.25 miles for schools, nursing homes, or other places that house vulnerable populations.

Another study published in January from the Harvard T.H. Chan School of Public Health found an increased risk of early death among elderly people living near or downwind of UOGD. The study, which examined more than 15 million Medicare beneficiaries living in all major U.S. gas development regions between 2001 and 2015, determined people’s exposure level to fracking-related air pollutants based on whether they were living close to a gas well or downwind from it, and then adjusted for social, environmental, and demographic factors.

“Our findings suggest the importance of considering the potential health dangers of situating UOGD near or upwind of people’s homes,” said Longxiang Li, lead author of the study, in a statement.

Despite the industry pushback, says one Pennsylvania doctor, there’s no longer any doubt that fracking harms human health.

The Marcellus Shale Coalition challenged the conclusions of both university studies, saying they relied on statistical modeling rather than actual exposure, and it accused them of seeking to discredit the natural gas industry. “As these so-called studies are published, we must see them for what they so-often are: Efforts to advance an anti-natural gas agenda, drive more dollars to already well-funded activist organizations, and of course — serve as internet click-bait,” the coalition said in a statement reacting to the Yale study.

Alison Steele, executive director of Environmental Health Project, dismissed the coalition’s attack on the studies. “I don’t think there’s any legitimacy in calling a well-conducted, peer-reviewed study click-bait,” she said.

Despite the industry pushback, argued Dr. Ned Ketyer, president of Physicians for Social Responsibility Pennsylvania, there’s no longer any doubt that fracking hurts human health. “There are enough studies now that show that fracking threatens the health of workers and communities and threatens the mental and physical health of people who work nearby and children who go to school nearby,” he said. “There’s enough of those associations now between fracking and bad health outcomes that should be informing regulators, politicians, and industry that there needs to be a better way.”

But he cautioned that the studies show correlation, not causation. “These are all epidemiologic studies, and those are not designed to show causation,” he said. “They just show association; they are looking at risk.”

That doesn’t weaken their validity as indicators of the hazards of fracking, said Steele of the Environmental Health Project. “If you’re looking at the constantly growing body of evidence, you are over time seeing a clearer and clearer picture that there are adverse health outcomes that tend to be higher in proximity to different types of shale infrastructure,” she said. “There is no reason not to be concerned by what it’s showing.”

In Pennsylvania, said Ketyer, the gas industry fights efforts to investigate fracking’s impacts on public health. Pressure from industry, he claims, recently led officials from the state’s Department of Health and the University of Pittsburgh to drop out of a planned public meeting to update residents of southwestern Pennsylvania on the status of three ongoing studies of fracking and health by university researchers.

People who live near gas wells and blame their illnesses on them are still looking for specific evidence of what caused their ailments.

Although the state-contracted studies are not complete, Ketyer contends that gas industry officials were sufficiently concerned about possible negative conclusions that they persuaded state and university officials to stay away from the meeting. To protest their absence, Ketyer resigned from a board that advises the studies. Neither the university nor the Pennsylvania Department of Health responded to requests for comment.

Despite the mounting research, people who live near gas wells and blame their illnesses on pollution from the rigs are still looking for specific evidence of what caused their ailments. Until two months ago, Abby Tennant, her husband Scott, and their daughter Piper, 13, lived in Wetzel County, West Virginia. Their house was about a quarter mile from a gas well pad containing eight wells, one compressor station, and four storage tanks for fracking wastewater.

Tennant said she and her daughter began to feel unwell after the pad was built in 2010 by EQT, an independent natural-gas production company, which did not respond to a reporter’s request for comment. Her symptoms — which included nausea, shortness of breath, chest pain, and dramatic weight gain — worsened in late 2020 after at least one of several tanks holding fracking wastewater leaked. After the family moved to a home about 40 miles away, she said, her symptoms eased.

Tennant said her doctors have been unable or unwilling to link her family’s symptoms to fracking, but she has no thought of returning to the family home, where her husband has lived all his life. Nor will she sell the house, despite receiving offers, because she doesn’t want anyone else to be exposed to the well pad’s emissions. “I will not be responsible for another family going through that,” she said.