Donna Quesada: And why Kundalini Yoga? That became your path? 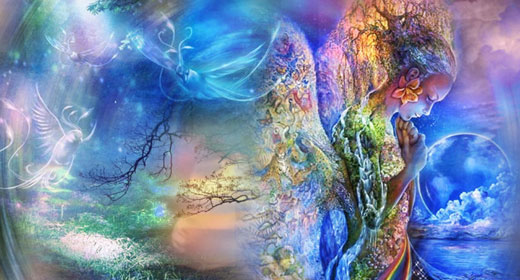 Guruprem Khalsa: Well, it wasn’t only Kundalini Yoga. I had…Yes, it was always my primary device. But that itself, is just a preparatory tool for my more refined dance with aspects of my Sikh Dharma life. But I used other tools, too. I’ve been doing Kundalini yoga since 1976. And at a point some years ago, I wanted to get into a more linear expression of learning posture, so I embarked on a deep discovery of the Ashtanga system, too. And I did that for about 14 years. So, that was helpful, too, for a long time. But ultimately, deep in my relationship with my personal Guru…The Guru is that form of the formless that I can meditate on, imagine and love. I have the words that I recite. I can speak the wisdom of the Guru, therefore, I can become. I’m trying to become my name…Prem means love. I’m not the Guru; I want to be the beloved!

DONNA: So then, will any path do…that brings you there?

GURUPREM: Oh, absolutely! Sure. Any path will do. If you approach it with the right desire and discipline and devotion. Absolutely! It’s just called from a different song. But it’s all part of one verse. One song.

DONNA: Do we need a teacher?

GURUPREM: Absolutely. I don’t know…I don’t know how anyone…Sometimes the teacher’s nature…That’s pretty rare though. Generally speaking, 99.9% of the time, you are going to want a teacher.

GURUPREM: Good luck. Didn’t you need a teacher with your parents? Didn’t they need to teach you? Help you walk? Do you just leave a baby that’s just born? “See ya, Junior!”You’ve got to teach them a lot. You are teaching them, not so much by telling them…They are copying you. They are imitating you. If they had nothing to imitate, they would die.

DONNA: All the more reason to embody virtue.

GURUPREM: Exactly right. So, first teacher is mom. Second teacher is dad. Third teacher can be the world out there…friends or school teacher. Fourth teacher is your spiritual teacher. And everyone, at some point. Some kind of soul guide is going to appear in some way. Now, whether we act on it or properly recognize it…that’s an individual circumstance.

DONNA: So, let me just change the channel just a little bit. Who are we? I’m thinking of a quote by our teacher Yogi Bhajan: “We are spiritual beings having a human experience.”What does that mean? And who are we, really?

GURUPREM: I would like to start with the word human. English has some roots in Sanskrit. So, humeans “spectrum of light,”like the spectrum of the rainbow. Man means “mind.”That is direct Sanskrit. It literally means “full spectrum of the mind.”Your mind is a tool to help you recognize the soul. The soul is so subtle that we have to develop the type of mind that allows us recognize things that are so subtle. What is the holy grail of science? Let’s just say within physics…astro physics or quantum physics. The holy grail is, how did nothing become something? First cause. And the beauty there…I think we are getting close, but the closer we think we are getting, the more mysteries are presented. The infinite mystery maker will never run out of mysteries. You can only get there by invitation. And if you are invited to experience it, you don’t bring back any math formulas. You only bring back a smile! And all you can do for your students is prepare them for the invitation.

DONNA: So, to the question who are we?…We are trying to navigate these mysteries.

GURUPREM: Right. That’s our human nature. So, it’s incumbent on each of us to want to develop our abilities to have our minds and our bodies as trusted employees…And then show up and receive your nectar! The nectar is…there’s an interesting concept of nectar. Nectar is what brings us to wholeness. You know we are in pieces for our experiences, but sometimes we need to have that in order to experience enough pain to want to be made whole again.

DONNA: You bring up such an interesting point about this business of experiencing pain. Is that what it takes to get to that place of wanting to wake up?

DONNA: I love that word humility. You speak in your book Everyday Devotion, which I love, about surrender. Is that what’s meant by surrender? When you get to that point?

GURUPREM: Well, you’ve got to surrender to your sacredness. If you think on the human body, there is even a location for your sacredness. The sacrum bone at the base of your spine. The triangle shaped bone with eight holes. They named it sacrum because it sounds good! It comes from the word sacred, which comes from sacrifice. Sacrifice means, “to contract so something else can expand.”There is no expansion without contraction.

DONNA: And what does that have to do with the sacred?

GURUPREM: Because if you learn the art of how to engage the muscles of the pelvis, you can create an expansion in a very useful place called the heart center. You can awaken that, so your ability to move from the base to your heart will have fewer obstructions. And the way it’s done is a very practical thing. The way it’s done is through the axial. I will say this…pretty much the axial can define your life. Define your life through confinement, which will make you feel like you are suffering. Or it can put you into refinement…They both have pain involved, by the way. Refinement pain, you don’t feel the suffering, but you definitely feel challenged.

When you are confined and you fight back, you will feel the suffering. Suffering that will put you deeper and deeper into a depressed state. But the reason for the axial…you open that up and then your words….and your words are the most powerful thing you have…can get you fired. Open the paper and see who got in trouble today because of their words. There is always somebody. If you make your words divine and develop some technique on how to speak to your heart before it gets to your mouth…I mean, a lot of this is basic singing and speaking techniques that have been taught for a long time, but we have stopped teaching them because we are so amplified with our phones and other microphones. And we have lost the ability to connect with our words and our presence. So, the idea of the sacraments…it’s important because this domain, among other things, connects you to mother earth and you can feel that. It connects you to other people through your words and it’s going to connect you to the depth of your heart as well. This is where Yoga science is really helpful because it’s got so much wisdom on the practical ways of learning these things. Kundalini Yoga…I’m very fond of because it goes right to it. They make no pretense…this is what we are going to do. This is how we do it. Practice.

DONNA: So, it’s a straight shooter.

GURUPREM: It is, but you have to have a bit of faith and this is awfully strange stuff. I thought so when I was 22. I found it so intriguing, mystifying, doubtful…very strange. But I kept at it, mostly because I wanted to be with this young lady. That is what got me to my first six classes. But fortunately, I had my awakening and do you know what it was? It’s going to sound so funny in today’s world. In college, I turned from my Democratic, liberal family into a…dare I say it…a conservative, Republican, while attending USC. I was in a conservative fraternity. I just wanted to feel like I belonged to something. That was me, back in the 70s.

And after six yoga classes, I woke up and I realized…I’m not making a condemnation of a political party or anything. I was just doing it. I just wanted to be accepted by this group of people I fell in with. It’s the Stockholm Syndrome, if you will. I just became like the people I wanted to be accepted by. But it wasn’t based on any concrete reality I could live with. Six Yoga classes later, I just realized, you’ve been doing everything based on deep fear of rejection.

DONNA: That’s powerful. Well, something about Kundalini Yoga is that it is for the house holder. It’s not for renunciates, like in India. How do you balance this individual awakening with taking social action? You know, we live in a world now with so much environmental destruction and political struggles. This is not new, it’s been going on for decades. How do we balance our action in those areas with our individual awakening?

DONNA: Does that mean it will happen naturally, as a result of our stability?

GURUPREM: You’ve got to hang with people you want to be like. Hopefully, the deeper awakening will provide you with enough inner security so you are not just going with the people you want to be approved by, without looking under the hood of what their actual values are. Consciousness is contagious. So, it’s incumbent upon each of us to figure out, whose values do you want to catch?

DONNA: So, we are starting in little ringlets that expand outwards with who you surround yourself with? Don’t think too ambitiously at first; just start by surrounding yourself with…

GURUPREM: I understand that people want to be part of a tribe. I’ve watched President Trump’s rallies and I’ve looked and thought, Wow, these folks have really found their tribe. I’m not making a judgement one way or the other. They have found their tribe and they have a synergy with this tribe. What it’s based on, you can talk about in another discussion. But there is no denying that they are part of a tribe. It’s important that whatever tribe you are a part of…if it’s based on all the things you are against, you might want to find a new tribe.

DONNA: Final question. We are dipping just a little bit, or insinuating that this political arena that is going on right now…Would you say that some of our problems, globally speaking, come from the predominance of masculine energy?

GURUPREM: Oh, that’s a whole other subject. Of course it is. Look…The world will not truly begin its healing until…I want to say, the mothers step up.

GURUPREM: And men have to…We have been running this show for a long, long, long time. And we are not doing a very good job of it. Strictly in this world…It’s time to support and elevate the feminine.

DONNA: Wonderful. Is there anything you’d like to say to close this hour together?

GURUPREM: Well, I think this is a good introduction for another talk!

DONNA: Wonderful. I’d love that! And I’m sure the Awaken.com listeners would love that, as well. And with that, Guruprem, I thank you for your time.

Read Part I Here: Awakening Is The Recognition That My Existence Is A Miracle