Effects Of Climate Change In The U.S. Already Terrible And Widespread, Report Finds

by Nick Visser: The draft version of the fifth National Climate Assessment remains hopeful that the worst impacts can still be avoided 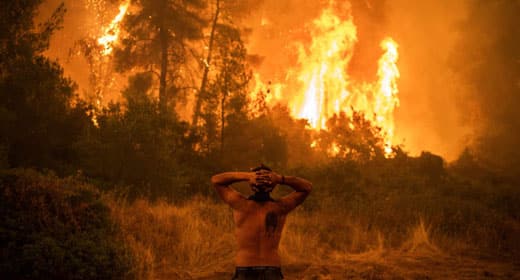 with dramatic cuts to emissions.

The effects of climate change in the United States are already “far-reaching” and getting worse, but there remains hope that a rapid transition to a net zero economy can stave off the worst impacts of a warmer world, according to a sweeping new report.

The findings are part of the draft version of the country’s fifth National Climate Assessment, which Congress mandates must be compiled every four years. Authors include leading voices from many federal science agencies, including NASA, the National Science Foundation, the National Oceanic and Atmospheric Administration and the Army Corps of Engineers, among others.

The draft report — which is in a public comment phase — comes as dignitaries from around the globe meet in Egypt for the United Nations’ annual climate summit.

The full report will be released sometime next year.

“Americans are feeling the effects of climate change in their everyday lives, as intensifying extreme events strain public services and outdated infrastructure,” the draft report reads. “As climate risks continue to increase in scale and frequency, multiple climate hazards and cascading climate impacts are disrupting essential societal systems in every part of the country.”

“The things Americans value most are at risk,” it continues. “Many of the harmful impacts that people across the country are already experiencing will worsen as warming increases, and new risks will emerge.”

The authors directly link human activity and the release of greenhouse gas emissions to a slate of shocking effects: Rising sea levels, melting ice caps, warmer oceans and changing rainfall patterns. The U.S., the report says, has warmed 68% faster than the planet as a whole, or about 2.5 degrees Fahrenheit in the continental U.S. above pre-industrial levels.

Those figures haven’t yet approached the level of warming scientists say will unleash the worst effects of climate change. But they are already making extreme events like wildfires and hurricanes worse, leading to increased death and destruction in many regions of the country.

“Compound events — combinations of weather or climate events affecting one location back-to-back or multiple locations at the same time — are already occurring in every region of the country and are projected to become more frequent as the world continues to warm,” the report says. “These events have cascading effects through supply chains, food networks, and other interdependent systems that typically cause greater harm than isolated events.”

While grim, the report is adamant that “faster, deeper cuts” in greenhouse gas emission remain achievable “through a rapid transition in how we produce and use energy and manage lands.” The U.S. reduced emissions by about 12% between 2007 and 2019, but they must fall by 6% each year from this point on to see the country go net zero by mid-century.

“Every additional increment of warming — and every action to reduce that warming — matters for reducing the harmful impacts of climate change on the United States,” the draft report reads. “The worst consequences of climate change can still be avoided or limited by large-scale actions that rapidly decarbonize the economy and prepare communities for impacts. Many options are available to reduce emissions over the next decade that also provide immediate health and economic benefits.”

President Joe Biden is set to travel to Sharm El-Sheikh, Egypt, to attend the U.N. Climate Summit later this week, where he will tout the country’s efforts to limit climate change and reach net zero emissions by 2050. U.N. Secretary-General Antonio Guterres issued an impassioned plea Monday at the opening of the event for the world to do more, saying the planet was on a “highway to climate hell.”

“Humanity has a choice: cooperate or perish,” Guterres said. “It is either a Climate Solidarity Pact – or a Collective Suicide Pact.”