The French Senate has passed legislation requiring parking lots with at least 80 spaces be covered in solar panels. 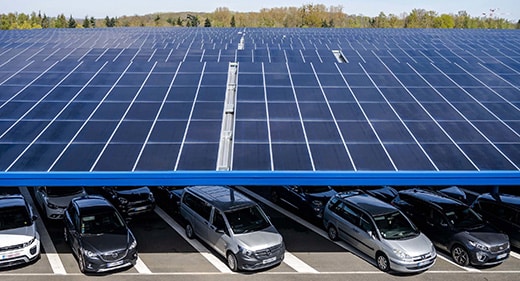 “We must not delay the implementation of the decarbonization of our economy,” said Senator Agnès Pannier-Runacher during a debate on the measure, which is part of a larger renewable-energy package.

Disneyland Paris is currently building a massive solar canopy on its main parking lot, which has 11,200 spaces. When completed, the project will be one of the largest solar canopies in Europe, the company said. Comprising 82,000 solar panels, it will supply enough electricity to power a city of more than 17,000 people.

As part of its solar build-out, France is also weighing measures to build solar installations on vacant lots next to highways and railways. French President Emmanuel Macron has set a goal of increasing solar power tenfold by 2050. “We need a massive acceleration,” he said in remarks in September. “I want us to go at least twice as fast for renewable energy projects.”