By Zoe Sottile: A mindfulness meditation course may be as effective at reducing anxiety as a common medication, according to a new study. 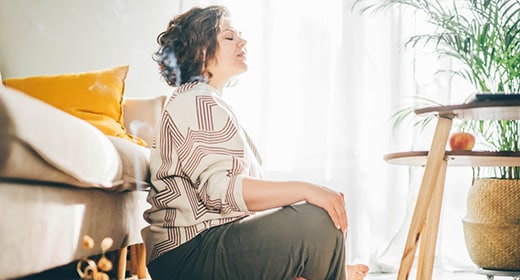 The research, published on November 9 in JAMA Psychiatry, involved a group of 276 adults with untreated anxiety disorders. Half of the patients were randomly selected to take 10 to 20 mg of escitalopram, the generic form of Lexapro, a common medication used to treat anxiety and depression. The other half were assigned to an eight-week course in mindfulness-based stress reduction.

The results were stunning: Both groups experienced about a 20% reduction in their anxiety symptoms over the eight-week period.

Elizabeth Hoge, the lead author on the study and the director of the Anxiety Disorders Research Program at Georgetown University Medical Center, told CNN that she hopes the research can open up more treatment options for patients with anxiety.

“Lexapro is a great drug; I prescribe it a lot,” she said. “But it’s not for everyone.”

Meditation could be prescribed in lieu of medication for patients who experience severe side effects or have allergies to anti-anxiety medications, for instance, Hoge says. And starting meditation could also be a first step for people who have untreated anxiety and are wary of medication.

But the research shouldn’t be a trigger for patients to stop taking their medication without consulting a doctor. “If someone’s already taking a medication, they can try meditation at the same time,” Hoge said. “If they wanna come off the medication, they should talk to their doctor.”

There may be undetermined factors that make some patients respond better to meditation. Hoge says that after data collection had ended, participants were given the option to try the treatment option that they hadn’t been assigned. Some patients who had been assigned to the meditation group found that the medication was actually much more effective for them, and vice versa, according to Hoge.

Hoge says that further research could explore “what are the predictors of response in the different treatments,” studying which patients benefit more from meditation versus medication. Then clinicians could prescribe different treatment regimens based on their patient profiles.

And she hopes that the research leads to more insurance companies covering meditation courses as anxiety treatment.

“Usually, insurance companies are willing to pay for something when there’s research supporting its use,” she said. “If they know it’s just as effective as the drug which they do pay for, why don’t they pay for this too?”

The patients assigned to the meditation group were asked to attend a mindfulness meditation group class in-person once a week. Each class was around two-and-a-half hours long and held at a local clinic. They were also asked to meditate on their own for around 40 minutes per day.

Hoge compared the time commitment to “taking an exercise class or an art class.”

But according to Joseph Arpaia, an Oregon-based psychiatrist specializing in mindfulness and meditation, the daily time commitment is likely too much for many patients dealing with anxiety.

“Telling people who are that overworked they should spend 45 minutes a day meditating is the ‘Let them eat cake’ of psychotherapy,” he wrote in a response to Hoge’s publication, also published in JAMA Psychiatry.

Arpaia says that he has worked to find less time-intensive mindfulness methods to help patients manage their anxiety. One technique he teaches is called a “one-breath reset” that helps patients calm themselves over the course of a single breath.

But despite his reservations, “It’s always interesting to see meditation work, and it works as well as medication,” he said. “My hope would be that people realize that there are things other than medication that can work.”

“My other hope would be they realize that if sitting and following your breath makes you feel relaxed, great, but it doesn’t make everyone feel relaxed. Find something that does. Read a book, go for a walk, spend time gardening,” he said.

The patients assigned to the meditation group participated in a specific program called mindfulness-based stress reduction, first developed by Jon Kabat-Zinn in the 1970s. The program is secular but based on some Buddhist teachings.

“It’s like a skill you practice,” Hoge said. “People learn to have a different relationship with their thoughts. In the practice, we train people to just let go of the thoughts, be patient and gentle with the thoughts, just let them pass.”

The “practice of doing that over and over lets people put a little distance between themselves and their thoughts,” she said.

Patients shouldn’t expect meditation – or medication – to completely eliminate their anxiety, according to Hoge. “It’s normal to have anxiety,” she said. “But we can make it quiet down a little bit.”

“People think meditation is hard, that you have to keep your mind clear of thoughts,” she said. “That is not the case. You’re still meditating even if you’re having thoughts. Just having the intention to meditate counts.”

And Arpaia says that meditation can help disrupt the feedback loops that foster anxiety.

“Anxiety tends to be something that feeds on itself,” he said. “What happens is a person becomes anxious, which impairs their cognitive and social skills. As the person starts to feel more impaired, that builds anxiety.”

Anxiety isn’t the only challenge that meditation might help patients address.

A study published in the American Journal of Nursing in 2011 found that an eight-week mindfulness program was just as effective as antidepressants for preventing a relapse of depression.

Hoge said that different meditation programs might be appropriate for helping treat depression and ADHD, among other conditions.

“I think there’s great promise there,” she said.