Thanksgiving as a sign of intelligent life? So says the Dalai Lama.

by Kay Campbell: I can’t quit thinking of a mosquito sipping the blood of His Holiness, the Dalai Lama. 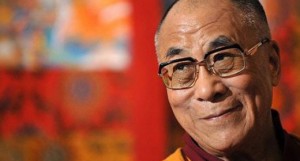 “Sometimes,” the Dalai Lama said during one of his rambling remarks during his visit in October to Emory University, where he is a professor for the Emory-Tibet Science Initiative, “when I am in an area where there is not malaria, I let a mosquito have a drink. I watch. But no appreciation – just fly away.”

The idea, for the Dalai Lama, is that human beings, as creatures with so much sentient potential, should be the most advanced in our abilities as to show appreciation.

“So I am not sure about the mosquito,” the Dalai Lama said.

But given that standard, how many of us human beings could he be sure about?

As Thanksgiving rolls toward us, dropped like an autumn pear under the flurries of glittering Christmas fliers, it’s worth considering how high on this particular scale of sentience any of us could rise. How appreciative are we of the blessings, gifts and advantages that surround us?

As I write these lines, many Muslims will be beginning a one-to-three-day fast for Ashura, a date that for Muslims variously commemorates the death of the grandson of Prophet Muhammad, Moses’ victory over the forces of the Pharaoh, and the date of the end of Noah’s flood. As with the month-long fast of Ramadan, part of the reason for fasting is to sharpen sympathy and concern for the hungry in the world.

It turns out, according to a study published in Psychological Science and reported by ScienceDaily.com, fasting will, in fact, increase a person’s sympathy with the hungry. People with low blood sugar are more likely to support political positions that help the poor than are people who have just had a big meal.

Maybe that is why it is the custom to give thanks before the Thanksgiving meal, rather than afterwards: The pangs of hunger can remind us of how dependent we are upon the regular arrival of new blessings to prop us up, of just how precious those bites of food are.