11 Facts About Coast Redwoods, The Tallest Trees In The World

by Melissa Breyer: Sturdy, stalwart, and superlatively statuesque, California’s coast redwoods stand out as some of the most impressive organisms on the planet… 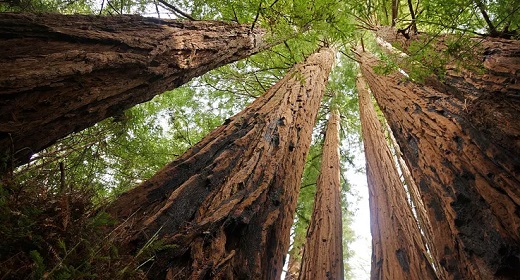 Before the 1850s, coast redwoods (Sequoia sempervirens) luxuriated amongst some 2 million acres of California’s coast, stretching from south of Big Sur to just over the Oregon border. One of three members of the Sequoioideae subfamily of cypress trees, the coast redwoods and their cousins, the giant sequoias (Sequoiadendron giganteum), hold the records for tallest and largest trees in the world, respectively.

For thousands of years the people of the area managed to live in harmony with these ancient trees, understanding the importance of their unique forest ecosystem. And then the gold rush happened. With the arrival of hundreds of thousands of gold-seekers starting in 1849, the redwoods were doomed. Logged into near oblivion to keep up with the demand for lumber, today, only 5 percent of the original old-growth coast redwood forest remains, fewer than 100,000 acres dotted along the coast.

The loss is heartbreaking … and gives all the more reason to sing the praises of these supertrees. And praise is easy, considering how spectacular they are. Consider the following:

Coast redwoods are among the oldest living organisms in the world. They can live for more than 2,000 years – which is to say, some of these grande dames were alive during the Roman Empire. The oldest-known living redwood clocks in at around 2,200 years old. Aside from the pockets of old-growth, most of the coast redwood forest is now young.

2. They Reach for the Stars 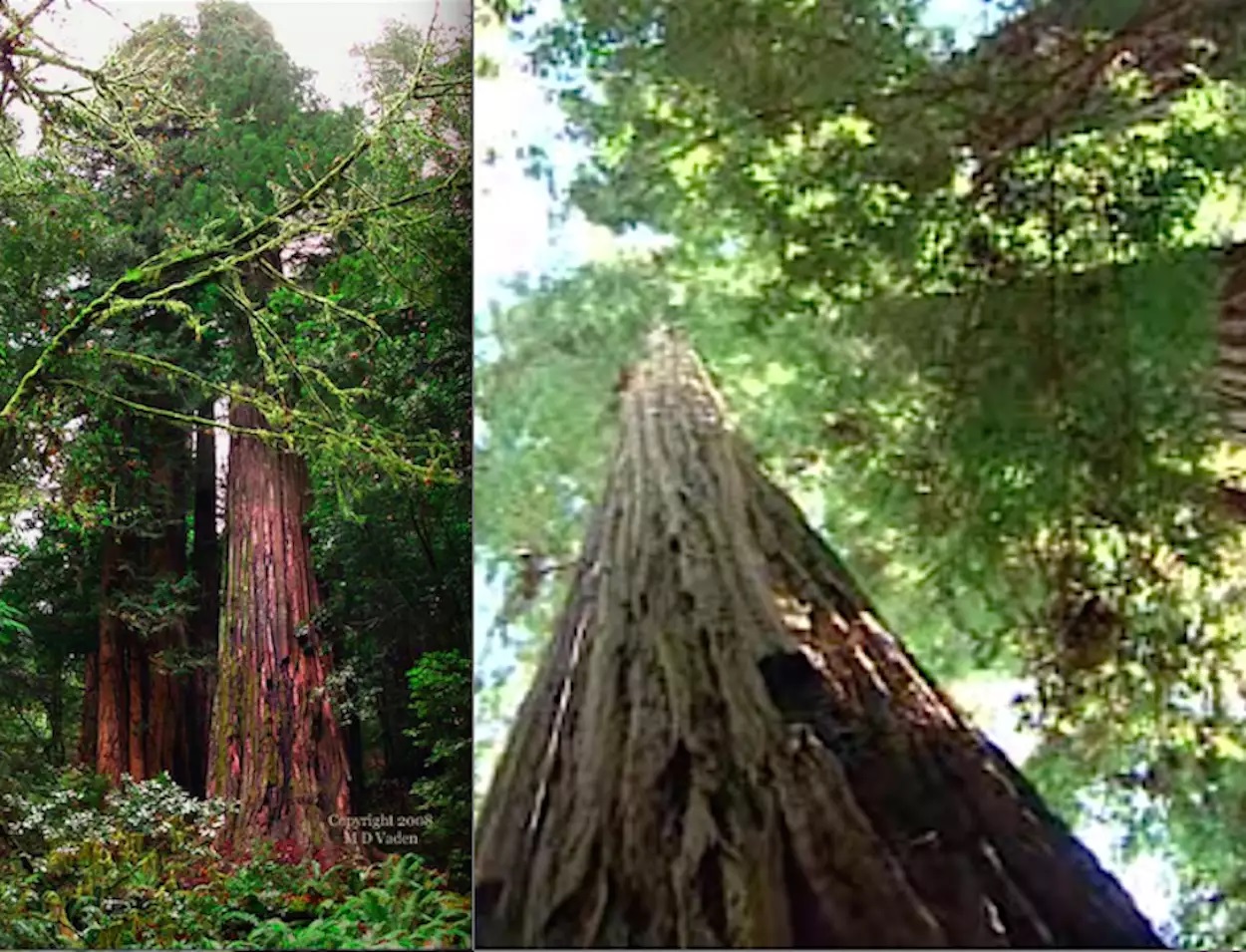 © M. D. Vaden Landscaping and Tree/YouTube Attaining soaring heights of more than 300 feet, they are so tall that their tops are out of sight. The tallest one of all is a towering beauty by the name of Hyperion (pictured above); discovered in 2006, this giant stands at 380.1 feet in height. Other notable specimens include Helios at 374.3 feet (114.1 meters), Icarus at 371.2 feet (113.1 meters), and Daedalus at 363.4 feet (110.8 meters). Because people are jerks, the trees’ locations are kept secret to protect them from vandalism.

Incredibly, mats of soil on the upper branches of the canopy support other plants and whole communities of worms, insects, salamanders, and mammals. Plants that grow on other plants are called epiphytes; some of the redwoods’ epiphytes are trees themselves. Some of the trees that have been documented growing on the coast redwood include cascara (Rhamnus purshiana), Sitka spruce (Picea sitchensis), Douglas fir (Pseudotsuga menziesii), western hemlock (Tsuga heterophylla), and California bay laurel (Umbellaria californica) … some reaching astonishing heights of 40 feet.

One might think that such a lofty being would require deep roots, but no. The roots only extend down six to twelve feet. But what they lack in-depth, they make up for in breadth. Extending up to 100 feet from the tree’s base, they intertwine with the roots of others, all holding on to each other, greatly increasing their stability. 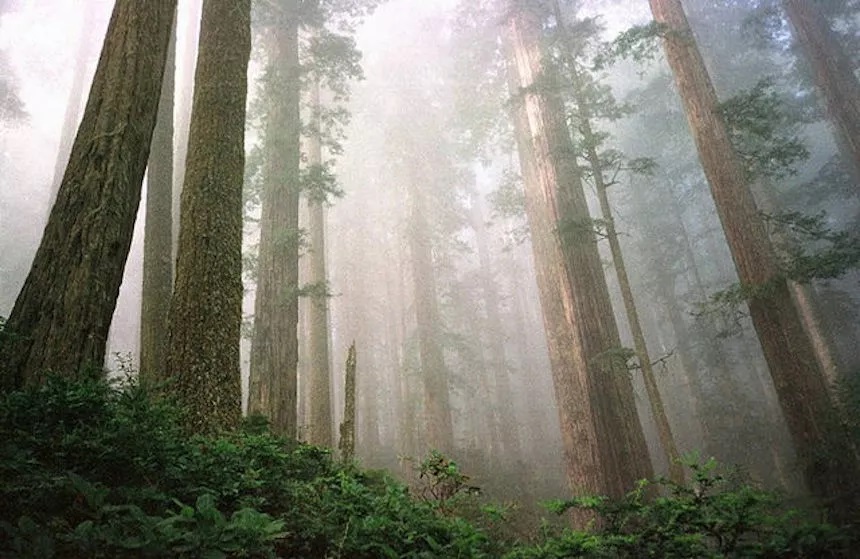 Bureau of Land Management/Flickr/CC BY 2.0 In the temperate area where coast redwoods live, rain provides water during the winter; but in the summer, the trees rely on coastal fog for moisture. The fog condenses on the needles and forms into droplets, which is then absorbed by the trees and shed to the ground where it waters the forest understory. Fog accounts for around 40 percent of the redwoods’ moisture intake.

6. They Used to Host Geese

These trees are so big that when scarred by fire, cavities can form that are large enough to once be used to house geese by settlers. To this day, the scar caves are called “goose-pens.”

8. They Have the Cutest Pinecones

You might expect such a statuesque tree to have equally dramatic pinecones, but in fact, they bear diminutive cones of just an inch in length, each bearing just a few dozen wee seeds.

7. They Have Ghost Helpers 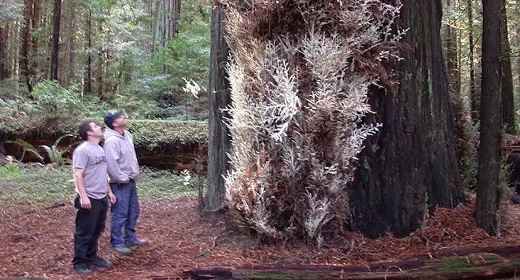 Redwood Coast/flickr/CC BY 2.0Amongst the forests of coast redwoods, there are around 400 small redwoods that are completely stripped of color. Having long stumped scientists, so to speak, recent research likely explains what’s going on. The so-called “ghost redwoods” were found to be full of cadmium, copper and nickel and other noxious metals. It’s believed that the wan trees are in a symbiotic relationship with their healthy neighbors, acting as a “reservoir for poison in exchange for the sugar they need to survive.”

9. They Were Once International

While the stately coast redwood now lives only in pockets along the Pacific coast, it used to have a much wider habitat; they could be found elsewhere in the west, as well as along the coasts of Europe and Asia.

Named for the deep rosy hue of their surface, the redwoods’ bark is impressive beyond color. At up to 12 inches thick, it allows the trees to generally survive forest fires, which are actually important since they create room for new seedlings to grow. Tannins in the bark also do a good job at fending off damaging insects.

11. They Are Climate-Change Fighting Superstars

Trees store carbon dioxide, which makes them an important ally in fighting climate change. But according to research, coast redwoods store more CO2 than any other forest in the world They hold 2,600 metric tons of carbon per hectare (2.4 acres), more than double the absorption rate of the Pacific Northwest’s conifer trees or Australia’s eucalyptus forests. Which is to say, if their majesty isn’t enough to woo the unmoved, how about that they are working to save the world?