The Sweet Spot between Doing and Being

by Viral Mehta:  It is a simple yet profound metaphor that a childhood mentor of my mom’s shared with her decades ago: “When one foot walks, the other rests.” 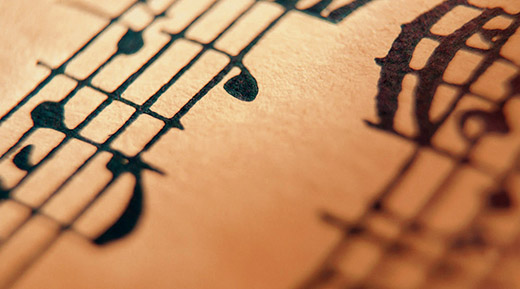 Close Up of Music — Image by © Royalty-Free/Corbis

It’s the way all of nature works, a beautiful reminder that everything is in ebb and flow, engaged in cycles and rhythms.

Our own bodies follow natural patterns, recuperating every night and preparing for the next day’s activity. With music as well, the structure imposed by notes inherently depends on the unstructured space supporting it. The notes and the space between them come together to create music.

As a culture, though, we give more importance to creating notes and relatively little to the space between them. Between creation and being, the emphasis is on creation. Interestingly, the musician John Cage felt that his most important piece was “4’33”,” in which a musician plays no notes at all, bringing to focus natural, environmental sounds. His point was that, “There is no such thing as an empty space or an empty time. There is always something to see, something to hear.”

Of course, our societal bias is understandable. Creation usually manifests in an externally measurable way, making it a convenient basis for interpersonal organizing — for communication, comparison and differentiation. The downside, though, is that we start losing subtle value. Even a creative paragon of our times, Albert Einstein, reminds us of the limitation of this approach. “Everything that can be counted does not necessarily count; everything that counts cannot necessarily be counted.”

Our rational minds want to ensure progress, but our intuitive minds need space for the emergent, unknown and unplanned to arise. Within the existing paradigm, the external comes first, the internal takes a backseat, and in deference to measurability, we become more tuned in to doing than to being.

The problem isn’t in the doing per se, but rather in the nature of the doing. When we aren’t aware internally, we get so vested in our plans and actions, that we don’t notice the buildup of mental residue. So the momentum of “forward-thinking doing” continues in the mind. In that kind of state, even nature’s imposed breaks aren’t restful: we have trouble falling asleep, or even resting soundly. The mind just doesn’t relax.

The secret to more balance lies in how we frame our efforts. A reporter once asked Mahatma Gandhi, “Mr. Gandhi, you’ve been working fifteen hours a day for fifty years. Don’t you ever feel like taking a few weeks off and going for a vacation?” Gandhi laughed and said, “Why? I am always on vacation.” He was unconflicted, doing exactly what he wanted to do, without creating stress in his mind. Gandhian scholar Eknath Easwaran’s explanation for it: “Because he had no personal irons in the fire, no selfish concerns involved in his work, there was no conflict in his mind to drain his energy.”

Of course, few people can authentically say that they are doing everything exactly the way they want. But it’s a progression. And while we can’t flip the pattern of subtle inner conflicts right away, we can chip away at them little by little. As we strengthen our ability to observe what’s happening within, we recognize areas of internal misalignment.

Just the recognition itself is powerful. Subtly, a virtuous cycle ripples through: our awareness gives us choices, and our choices increase our awareness. It’s a process of constant refinement, but even deeply ingrained habits do begin dissolving, with the most entrenched and unconscious habit of all being that of self-orientation.

When our sense of purpose stops being driven by pure self-interest, it changes how vested we are in the outcomes of our actions. Gandhi had tremendous passion for what he saw to be his work, but he was also rooted in humility, knowing that the result of all of his labor wasn’t in his complete control.

If anything, that only inspired him to work harder, and paradoxically, it also freed his mind up in powerful ways. At the height of India’s struggle for independence, Gandhi was known to be toiling away harder than ever — 21 hrs a day, for over two years. And yet, five minutes from addressing the nation, when someone asked him what he was going to say, his response was, “I don’t know. I’m not there yet.”

Though that kind of intense presence is exceptional, it’s not an “either you have it or you don’t” switch — it’s a spectrum. On the journey of imbuing more being in all of our doing, every conscious step in favor of inner awareness, every moment in which I exercise that option, pays off. The example of one foot resting while the other walks, points out a powerful lesson: If we drill down far enough, we can see that there is an inherent balance between rejuvenation and invigoration, engagement and observation, and being and doing.

The sweet spot is actually in the middle. We benefit greatly from a balance between structure and space, between action and rest, between consciously shaping and being receptive. We can fully immerse ourselves with a sense of purpose, while still being humble, affording a freedom from the stress of trying to control inherently emergent outcomes.

By practicing being present, we start to hit the sweet spot and life becomes art. Not just in how it manifests. Our truest artistry lies in how we construct our own lives, and attention and intention are the clay with which we mold our days. In Gandhi’s own words, “As human beings, our greatness lies not so much in being able to remake the world as in being able to remake ourselves.”

This article is reprinted here with permission. Previously on DailyGood.