by Yogi Bhajan: Historically this is a very outstanding kriya… 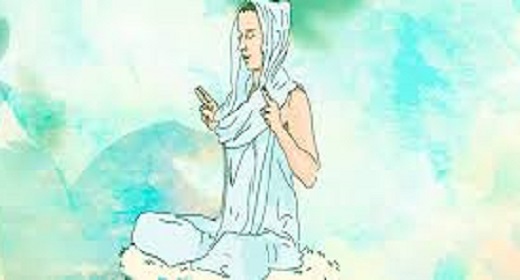 It is said to have been practiced by both Buddha and Christ. The great Brahmin who taught Buddha this kriya found him in a nearly starved and unhappy condition. Buddha was unable to walk after his 40-day fast under the fig tree. He began eating slowly. That great Brahmin fed him and massaged him. When Buddha finally started smiling again, the Brahmin gave him this kriya to practice.

It is said that Jesus also learned this in his travels. It was the first of many that he practiced. If you love a man as great as he, it is important to practice what he practiced in order to earn his state of consciousness. You have probably seen this hand mudra or gesture in paintings and statues. It is a gesture and exercise of happiness and it opens the flow of the Heart Center.

Don’t worry about learning this kriya to be a Buddha or a Jesus, just learn it to be yourself. Be a little selfish for your higher consciousness. Master the technique and experience the state it brings, then share it by creating beauty and peace.

Mudra: Extend the Jupiter (index) and Saturn (middle) fingers up and curl the Sun (ring) and Mercury (little) fingers, pressing them down with the thumb. Bring the hands up so the elbows are pushed back and a 30 degree angle is made between the upper arm and the forearm. The palms face forward and the forearms are parallel to one another. Make sure the elbows are pressed back and the chest is out.