The 5 Qualities Of Buddha Nature

by Chad Foreman: Buddha nature. The hidden jewel within… 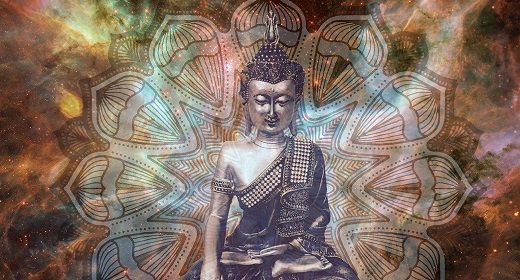 Buddha Nature is the most precious spiritual concept I have ever learned. Within Tibetan Buddhism all of the different schools have a threefold classification of the teachings from Buddha, they call it the three teachings or turnings of the wheel of Dharma. Buddha Nature is what the third turning or teaching is all about. The first turning is about karma, the second about emptiness and the third is all about Buddha Nature.

This is where Buddhist teachings link in with the perennial philosophy , a term coined by Aldous Huxley, where he explains the commonality between all ancient mystic teachings. A common ground sharing the idea of a universal spiritual essence as the source of all existence.

It’s known by many names, I like the term Buddha as a symbol for being awake or pure consciousness or enlightenment. Buddha Nature is simply your true Self, a nature that is simultaneously transcendent of but inclusive of human nature. Your higher Self as the ground of your being. That ancient primordial essence within you that is at the heart of all experiences.

As do so many meditation masters from Tibetan, Japan, Thailand, China and elsewhere, I hold Buddha Nature as the shining gem of inner refuge and the purpose of spiritual practice a virtual hidden gem within our own being.

In Tibetan Buddhism Vajrayana is the spiritual path of the indestructible diamond within which is Buddha Nature. Vajrayana uses an immanent enlightened essence as a spiritual path and goal. This is where I draw my inspiration for the following teachings about the five aspects or facets of Buddha Nature. Although these facets are describing seemingly different things they are referring to the one nature.

This is the first point to be made about Buddha Nature. I can’t tell you why it’s hidden, that’s actually a bit of a paradox because Buddha Nature is complete and perfectly aware and yet there’s a manifestation of not knowing its own identity. It’s a paradoxical journey back to where you started, where you never really left. A journey of growth, maturing and evolving. Heroically shedding old skins and becoming a new person only to finally realise what you where growing into was always right here already complete.If in essence I’m perfect already why should I practice anything? The best answer is because you have not realised or seen for yourself what you really are.It’s also hidden because Buddha Nature is an extremely subtle phenomena, which is a fancy was of saying it’s not obvious. The reason for this is because it cannot be grasped by the intellectual mind or even perceived through the five senses. It’s Buddha Nature itself that becomes Self aware within you, or it awakens through you to become Self luminous.

Just like space cannot be held or seen but contains the entire universe, Buddha Nature has a space like quality which is intangible. Often experienced as a nothingness or emptiness it is better described as an openness or boundlessness. Infinite nature is another clear way to express it. Without boundaries.

This boundless nature is impossible to understand with the thinking mind as hard as we might try. Even if you think you understand infinity, it’s still just a mental concept and far removed from the direct non conceptual connection with an infinite nature.Scientific research into physical things, still have not found any fixed physical things. Looking deeply into any object we find space and fluctuating energy patterns popping into and out of existence. This inconvenient truth of physics conveniently points to the perennial wisdom of mystics. The universe is made of an invisible intelligent substance/field which is what Buddha Nature is and physical forms bubble up and out of that.

Buddha nature is not just empty like space it’s also aware. This is a key point and meditation traditions tend to emphasis one or the other, either the empty aspect or the aware aspect but the truth is it’s a combination of both. Two sides of the same coin. Empty and aware.Self-enquiry is an ancient and powerful meditation method to come ‘face to face’ with your true nature, your Buddha Nature. Look now and see if you can turn your attention around and experience awareness itself. What do you find? Where is awareness? What shape is it? It’s these types of enquiries that lead to the discovery of Awareness being utterly unfindable and empty.Again it has been known by many different names in different mystic teachings throughout history. I like the term clarity or knowing. Others call it the light or luminous nature. Whether you call it awareness or the witness it’s pointing to the same thing which is so close to us yet so often overlooked. It is at the heart of our real identity. I am awareness is the one thing that is always true everything else passes by, comes and goes.

We are not talking about some dry bedrock passive screen behind existence as some teachers seem to point to, we are talking about a universal intelligence, the creative patterns, harmony and flow of life. A common mystical experience across all traditions is the profound feeling of love for all of existence often accompanied by intense bliss. This is a natural experience because its woven into the very existence of reality and is often naturally experienced as a sense of awe and wonder or the appreciation of a beautiful sunset.Buddha Nature has a particular type of love grounded in the direct experience of boundlessness or openness where you see yourself in others, in fact you see yourSelf in everything. This is not a romantic or sentimental type of love it’s literally the fabric of the universe. Often spiritual traditions emphasise this Love and Joy aspect of Buddha Nature and it becomes a gateway to this divine essence.

Incredible bliss has also been taught as an access point to the divine. Tantric schools emphasise this facet of Buddha Nature which seems to get blocked due to ignorance and energetic patterns that close down access to the natural bliss of Buddha Nature until it’s awakened through spiritual practice or sometimes even by accident. After all joy and bliss is your very essence and totally natural.

Buddha Nature endlessly expresses Itself. This is a non-dual way of saying that Buddha Nature is everything that exists. This might sound a bit grandiose a statement but what else are you going to call everything? Buddha Nature reveals itself as a complete paradigm. A way to view ourselves and the world that is spiritual in nature.As I started out saying this is a universal principle. It’s a paradigm prevalent in all major world religious and a view that could unite humanity. Slightly Pantheistic in its interpretation of reality but a lot of scientists are even starting to be tempted by idea that everything is consciousness.What we call form is really just vibrations of energy holding certain patterns we call atoms that make up the entire universe. These energy forms radiate from Buddha Nature the same way that heat radiates from the sun. Making a mysterious journey from the absolute formlessness of the essence into the expression as form.

To be totally clear all these things are not separate they only explained separately so we can understand them and begin to approach the enormity of what the universe really is. Becoming aware of Buddha Nature is the goal of all spiritual practice whether you access it through meditating on emptiness, being unconditionally loving or resting in awareness they all eventually lead to the totality of Buddha Nature.