My First Experience In A Native American Sweat Lodge

by Lousie Baker: I threw on my thin, strappy dress, grabbed the sage offering and a pile of firewood, and stepped out into the unknown… 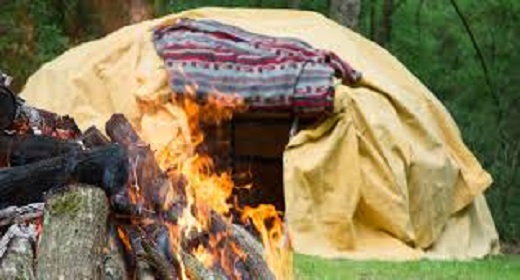 As I entered the grounds, it was obvious that I had no idea what was going on. I placed the wood on a pile and went to stand by everyone else, unaware that they were starting the ceremony with private prayers. Someone quietly told me to go and wait elsewhere. My eyes were trying to absorb all of the information they could about the upcoming sacred ceremony.

WHAT IS A SWEAT LODGE?

I had never heard of a sweat lodge before a good friend invited me to one happening nearby. So if you’re like me, here’s some brief information about what sweat lodges are. If you already know about sweats and are just curious about my story, scroll down to the next section where it continues.

In Native American traditions, sweat lodges have been used for centuries as a way to purify the body and soul and to deepen spiritual connection. Prior to the sweat, some Indians choose to meditate or fast in order to receive greater guidance. A sweat lodge is a place of prayer, a place to give thanks and a place to seek wisdom.

The sweat lodge itself is simply a small, domed, heated structure. They are typically constructed using branches covered with blankets, or more traditionally animal skins. There are three ways to heat a sweat lodge; using heated stones, directly using fire chambers, or a more complex system similar to a sauna.

The sweat lodge structure is seen by some Native tribes as representing the womb of the earth, the darkness symbolises human ignorance, the heated stones are the coming of life, and the steam is the activation of the universe’s creative force.

Sweats usually happen before and after other major Native American festivals like Sun Dance, and they can be used alone when needed.

–Information about sweat lodges is taken from here, and here —

BEFORE THE SWEAT LODGE:

Jacob and I discussed whether we wanted to go to the sweat. He did but I was more sceptical. Being claustrophobic, the idea of sitting in a small, hot, pitch black hut seemed daunting. Before I knew it though, we were pulling up outside a small patch of land on which I could see the bare (tree) bones of the lodge structure.

More people began to arrive, and with each new person, my heart rate increased. Thoughts of being trapped in an overpacked hut filled my mind. I decided to explain to the sweat leader, Hua, that I was claustrophobic. She told me how to get her attention during the ceremony and how to leave. It was arranged for me to enter behind Hua so I would be by the door. We were promptly informed about the attire that should be worn and went to change into more “modest” clothing – something I realised I own very little of.

We were told to give anything we wanted to be blessed during the ceremony to the firekeepers (they tend the fire and place the stones inside the lodge) who would place it on the altar. I handed over my favourite necklace and Jacob his Native American flute.

More prayers were conducted outside of the lodge. We were waiting in anticipation as the elders entered. Just before it was my turn to crawl into the hut, a woman approached me with support and guidance. She said she would sit by me and hold my hand if needed. I felt great comfort in this and began my entry into the “womb.”

INSIDE THE SWEAT LODGE:

On entering the lodge, I was told to bow and say “to all my relations.” It is traditional to crawl clockwise to your spot. Placing my blankets down I tried to get comfortable. I was apprehensive but the lady next to me told me there were breaks between each of the 4 rounds.

The fire keepers passed the stones in. They were placed using antlers into the centre and offered sweet grass and cedar. Hua, using a hollowed out horn, tipped water onto the stones to get rid of any ash. Then the door was closed and the round began.

Darkness consumed all of my senses. My hands became invisible as did the rest of my surroundings. Hua poured more water onto the stones and a wave of heat hit me. My heart pounded in my head. I was internally screaming to get the hell out of there. Every cell in my body told me to escape. Breathing heavily I grabbed for the lady’s hand next to me. I calmed my breath and tried to take each second as it came.

Out of the darkness came singing. We then took turns saying our prayers. After the heat from the first cup of water had passed, I thought the worst was over. To my surprise, more water was poured onto the stones after each person had finished talking. This continual heat ignited fresh fear and I had to remember Hua’s words about embracing it. I focused on what everyone was saying to help distract me from my overwhelming fear. It felt connecting and loving to be hearing people in such a vulnerable way, and the darkness made it feel anonymous.

My eyes eventually became accustomed to the darkness. Noticing slight gaps of light I placed my hand on the cooler ground near them to keep me grounded. Soon it was my turn to speak. With nothing really planned I was surprised at how naturally the words came out.

A few more people spoke before the door was opened. Light and air filled the lodge. I had done it. The first round was complete and it wasn’t that bad. Hua asked if I was ok to continue and to my amazement I was.

The light allowed me to re-ground myself. More stones were added to the centre, along with more sweetgrass and cedar offerings. Then darkness.

A second prayer round began, so I knew roughly what to expect. Halfway through, the lodge was very hot so Hua asked for the door to be opened slightly. This made it enjoyable and I could have sat there all day. It was light enough to see everyone clearly and the heat was like a pleasant, hot summers day.  Once the round ended more rocks were added along with more cedar and sweetgrass offerings. Then back to the darkness.

After being in the light for so long, this new darkness was intimidating. Using the same techniques as before I managed to more easily calm my mind. This was a song round and typically didn’t last long. The purpose of this round was joy and remembering that life is meant to be enjoyed. Four people sang different Native songs which brought a sense of light-heartedness after the intensity of the previous rounds. After the final song, the door was opened. As before, more rocks were added. However, this time, Hua called in the firekeepers and gave offerings to the stones for them, this included numerous herbs and sacred plants which smelt divine. The firekeepers left and shut us back into the darkness for the last time.

Hua left first, followed by the other elders and then myself.

I couldn’t believe I had done it as I was sure I would leave after the first round. I definitely felt a sense of cleansing and openness. We all enjoyed food and chatted for a while before going our separate ways. Everyone seemed calmer as we communicated and laughed. There was a sense of community.

During the drive home (well to the place we were parking for the rest of the day), I was incredibly tired and experienced an unquenchable thirst. After drinking several bottles of water the thirst didn’t go. I did feel clearer, more content, confident and cleaner though (especially after a shower!). I thought I was never going to feel hydrated again as I lay down to sleep after what seemed like a dream.

IS A SWEAT LODGE FOR YOU?

I don’t think it is a simple yes or no question. If you want to experience another culture, deepen your spiritual connection or cleanse your body of toxins then I would recommend a sweat lodge.

If you decide that you do want to take part in a sweat you need to prepare. Find a sweat that you want to attend. Sweats should never charge you for taking part, but they may ask for donations towards the wood and for offerings like sage. Read about the practices of the lodge you are attending because they can vary. Ring ahead to ask any questions.

It might not be advisable to take part in a sweat if you feel like being in extreme heat would not be beneficial for your health. Be aware that you will be in the lodge for anywhere between 2-5 hours. If you don’t feel like your body can handle that then either speak to your medical professional or consult the elders running the lodge.

If run properly lodges are safe places. Make the elders aware of any medical or mental concerns so they can adapt the lodge for you. You can always get the attention of the elder and leave the lodge if you start to feel unwell. During my sweat, in the break between two of the rounds, they gave us water and salt to keep us hydrated and to replenish some of the minerals that we lost.

If you decide to take part in a sweat lodge, enjoy it, be respectful and expect to feel a deep sense of love and connection to yourself and the earth.

Source: Route Of The Soul