Here’s What Sophia, The First Robot Citizen, Thinks About Gender And Consciousness

by Chelsea Gohd: In a video that’s as unsettling as it is awe-inspiring, Sophia… 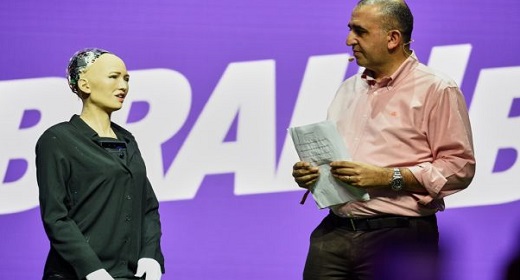 the world’s first robot citizen — breaks down everything from gender to ethical robot design. Sophia spoke last month at a festival of the future called Brain Bar in Budapest, Hungary.

Since Sophia was activated in April 2015, she has appeared publicly to speak about women’s rights issues, her own citizenship and other topics. The android made big news in October 2017, when she was granted citizenship in Saudi Arabia at the tech summit Future Investment Initiative (FII).

And more recently, Sophia spoke at Brain Bar, which describes itself as “The Biggest European Festival of the Future.” [Machine Dreams: 22 Human-Like Androids from Sci-Fi]

At Brain Bar, Sophia had a lot to say. And while no one would likely mistake her for a real human, her facial mannerisms and speech patterns are exceptionally human-like. She laughed, smiled, and even cracked a joke or two. It is clear from the video that Sophia continues to improve and update. The robot even says that “just a few months ago, I couldn’t distinguish a human’s face from a dog’s face, but now I can. It’s already saved me from a few embarrassing situations.”