by Adele Peters: It’s part of a broad plan to increase biodiversity by protecting 30% of the continent’s land and water… 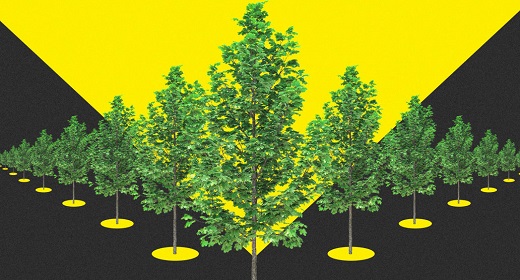 Over the next decade, the European Union plans to plant 3 billion trees. It’s one piece of a larger commitment to protect nature on the continent at a time when a million species, globally, are now at risk of extinction, and biodiversity loss also threatens future pandemics. In a new strategy document, the European Commission says it now aims to protect 30% of the region’s land and oceans, based on science that suggests that amount is necessary to preserve biodiversity.

“This is the first truly serious biodiversity strategy at a large scale that we’ve seen,” says Brian O’Donnell, director of the nonprofit Campaign for Nature. “It’s a continent-wide strategy. It’s an all-of-government strategy. It addresses both conserving and protecting the best of nature that remains and restoring new areas. . . . The tree-planting component of it I think is something that will get a number of people’s attention. But it’s only one part of what I think is a comprehensive biodiversity strategy for Europe.”

Other parts of the plan include limiting pesticide pollution and new approaches to agriculture. But forests play an important role—in Ireland, for example, around 90% of forested areas have been lost. A 2018 study suggests that at least half of Europe’s forests have disappeared over the last 6,000 years. “There’s a huge opportunity to do reforestation and to bring back some of the original function of the ecosystems there. Tree planting and reforestation will also be essential in Europe as areas heat up—this will be a strategy not just for biodiversity but in helping cities stay cooler.” Some cities, like Madrid, are already beginning to add more greenery to prepare. Tree planting can also help fight climate change, another major reason that species are threatened.

Bringing back more trees, along with protecting the forests that still exist, could also help wildlife rebound. “If you look at the areas around Chernobyl that were abandoned and forest were able to regrow, it’s incredible the diversity of wildlife that has quickly returned to that area,” he says. “So there is hope that some areas of Europe that have been devoid of significant biodiversity, with some major restoration work, can see a new abundance of wildlife—of birds, of insects, of mammals—that will help make it a much healthier system in terms of its natural biodiversity.” The next step, he says, is for Europe to create a formal strategy and each country to make plans for where restoration and protection of natural areas will happen.