Stress, Illness And The Immune System

by Saul McLeod: The immune system is a collection of billions of cells that travel through the bloodstream… 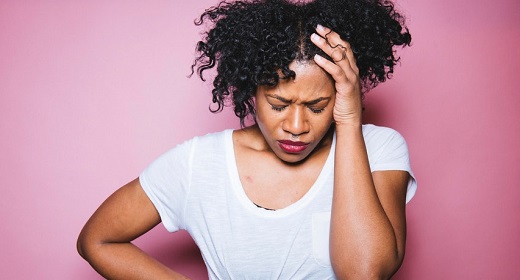 They move in and out of tissues and organs, defending the body against foreign bodies (antigens), such as bacteria, viruses and cancerous cells.

There are two types of lymphocytes:

B cells– produce antibodies which are released into the fluid surrounding the body’s cells to destroy the invading viruses and bacteria.

T cells (see picture opposite) – if the invader gets inside a cell, these (T cells) lock on to the infected cell, multiply and destroy it. 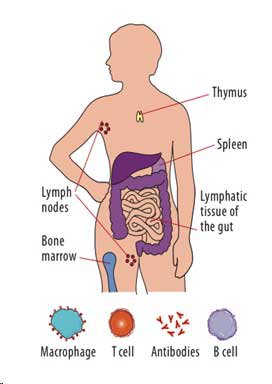 When we’re stressed, the immune system’s ability to fight off antigens is reduced. That is why we are more susceptible to infections.

The stress hormone corticosteroid can suppress the effectiveness of the immune system (e.g. lowers the number of lymphocytes).

Stress can also have an indirect effect on the immune system as a person may use unhealthy behavioral coping strategies to reduce their stress, such as drinking and smoking. 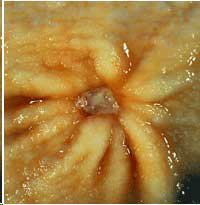 Hypertension (consistently raised blood pressure over several weeks) is a major risk factor in coronary heart disease (CHD) However, CHD may be caused by eating too much salt, drinking too much coffee or alcohol.

Stress also produces an increase in blood cholesterol levels, through the action of adrenaline and noradrenaline on the release of free fatty acids. This produces a clumping together of cholesterol particles, leading to clots in the blood and in the artery walls and occlusion of the arteries.

In turn, raised heart rate is related to a more rapid build-up of cholesterol on artery walls. High blood pressure results in small lesions on the artery walls, and cholesterol tends to get trapped in these lesions (Holmes, 1994). 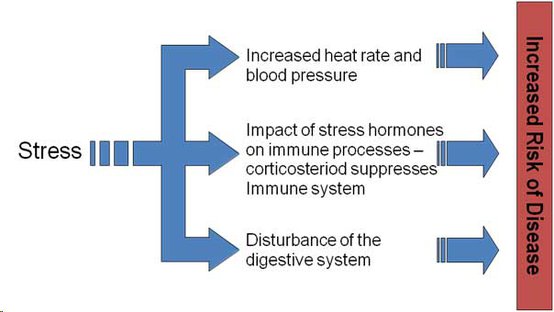 Stress can also have an indirect effect on illness as it is associated with all manner of bad habits (coping strategies), for example smoking, drinking alcohol to excess, poor diet due to lack of time, lack of exercise for the same reason, lack of sleep etc.

All of these are likely to have an adverse effect on a person’s health so could cause some of the ill-effects attributed to stress per se. 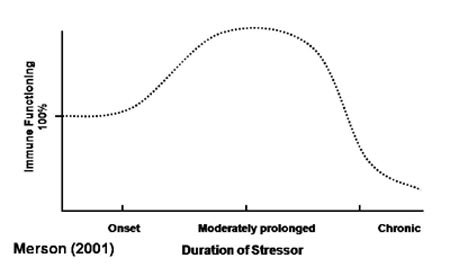 Short term suppression of the immune system is not dangerous.  However, chronic suppression leaves the body vulnerable to infection and disease.

A current example of this is AIDS – Acquired immune deficiency syndrome. Here the immune system is suppressed leaving the vulnerable to illness. Stress would just lead to frequent illness and infections.

Stress responses increase strain upon circulatory system due to increased heart rate etc.  This may increase a person’s risk of developing disorders of the heart and circulation e.g. coronary heart disease (CHD).  Individuals with type A personality have a greater risk of developing CHD.

The executive monkey study by Brady (1958) seems to support this theory.

Aim: To investigate whether stress of important examinations has an effect on the functioning of the immune system 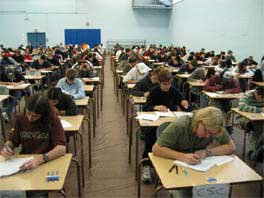 Findings: The blood sample taken from the first group (before the exam) contained more t-cells compared with blood samples taken during the exams. 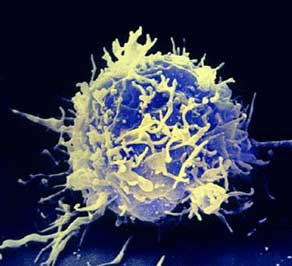 The volunteers were also assessed using behavioral measures. On both occasions they were given questionnaires to assess psychiatric symptoms, loneliness and life events. This was because there are theories which suggest that all 3 are associated with increased levels of stress.

Kiecolt-Glaser et al found that immune responses were especially weak in those students who reported feeling most lonely, as well as those who were experiencing other stressful life events and psychiatric symptoms such as depression or anxiety.

Conclusion: Stress (of the exam) reduced the effectiveness of the immune system.

Evaluation: Difficult to unravel the relationship for certain. Does stress cause illness or does being ill make you more prone to stress?

Also many of the studies do not take into account for the other factors which affect people’s lives. These can be drugs, alcohol, caffeine, nicotine, general health, diet, physical activity, sleep patterns, age and medication. Although many studies try to control these factors it is very unlikely to gain complete control.