What Happened To Christiania’s Dream Of Becoming Denmark’s Hippie Paradise?

by Justin Calderon: Seen from a boat drifting along Copenhagen’s wide canals, the neighborhood of Christiania is a verdant enclave tucked beneath a thick canopy of trees… 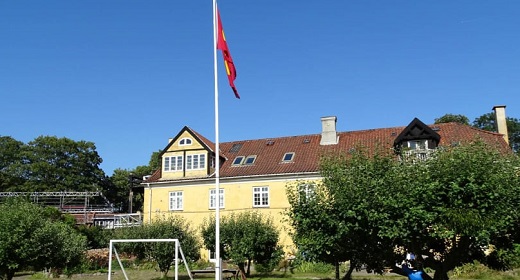 Half a century after it was founded as a breakaway anarchist commune, it seems to have matured into a slice of paradise.

But all is not well in Christiania. While the hippie community still thrives today, it’s beset by problems that threaten its identity and future — an existential crisis variously blamed on intolerant local authorities, police, gentrification and, inevitably, tourists.
Denmark is often listed among the happiest countries in the world, but back in 1971 there was enough discontent to inspire a group of hippies, junkies, oddballs and outcasts to set up a permanent squat in a former military complex in the country’s capital.
Over the years, the social experiment developed into a self-contained society that, though it rejected state control, lived in tolerable harmony with the rest of the city. Still at core an anarchist community, Christiania remains a place where drugs are freely sold and consumed without overt interference from the police — a weed-smoking Disneyland.
Christianites, as residents are called, condone the drug dealing, but do not profit from it. All marijuana sales are confined to the enclave’s infamous Pusher Street, an area liberally decorated with the red and yellow colors of Christiania’s flag, where up to a dozen dealers typically work pop-up stalls selling drugs branded with names such as Northern Lights, Pineapple Express or AK-47.

Christiania has become one of Copenhagen’s major tourist attractions.
Justin Calderon
On a Scandinavian summer day in July, people are puffing lit joints on the top of old military ramparts overlooking the neighborhood’s Nemoland Café, or idling at the Woodstock Bar. Families with little ones are meanwhile enjoying a lunch break at the Grøntsagen (Green Grocer), an iconic vegan/vegetarian restaurant.
Just down the road, a jam session is underway. People sitting in a circle, some perched on wooden logs, sing along to The Doors in front of the commune’s “old school” grocery store, Indkøbscentralen.
It would be easy to claim that the free spirit of the Summer of Love lives on here and Christiania Freetown — as the movement behind it is known — has been successful in its efforts to carve out a hippie “utopia.”
In summer its bars and restaurants throng with locals and visitors.
Justin Calderon
But Christiania has become a victim of its own success. Mass tourism has arrived alongside gentrification, and some residents have chosen to leave the commune after four decades of residency to escape rising prices. It’s simply too expensive to be a Christiania hippie these days.
Jorgen Jensen lived in Christiania since the beginning, when the commune was a cobbled-together squatter village of hippies spilling over from the Thylejren festival in the summer of 1970 — Denmark’s Woodstock — and he was just 17.
“I was a dreamer and an activist in the environmental movement,” remembers Jensen, who is today 65 and retired. “I demonstrated against the Vietnam War and World Bank trade meeting.”
But after living in Christiania for 48 years, Jensen moved out last June, citing economic issues. Precipitating this move was the dramatic rise of his rent.

Jensen’s home of decades went from costing $300 a month to about $1,300 as Christiania has become “normalized” under Danish law.
Before this normalization period, Christianites paid a “rent” into a communal treasury. Their economy was self-reliant and supported by the non-drug economic activities of the Freetown — bars, restaurants, cultural activities (such as theater and yoga groups), and manufacturing, which includes the production of the world-famous Christiania bicycle and other Freetown-inspired inventions.
In June 2011, after several years of bitter negotiations with the government, Christiania’s lawyer, Knud Foldschack, settled on a decision to establish the Christiania Foundation, a vehicle that would collectively purchase land from the state at below-market prices, effectively turning Christianites from squatters into landowners — 40 years after the commune’s establishment. 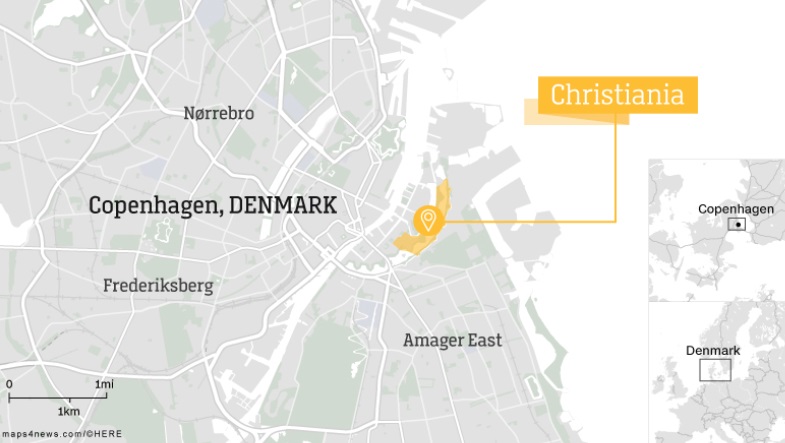 Christiania’s treasury is now answerable to the foundation, which is run by a board of directors instead of communal meetings and has raised Christiania’s rents to cover repairs and reconstructions of military-era infrastructure and historical buildings, such as barracks and gun power storage depots, to make room for new businesses.
Today, Christiania is home to some elegant restaurants and a popular stop on Copenhagen’s tourist trail, billed to visitors via bus advertisements as a must-see attraction alongside the Little Mermaid statue. This gentrification has driven up rent further.
Some of Christiania’s 900 residents are identified as middle class. A peek into Christiania homes reveals tastefully furnished wooden caravans with extensions. Property is well taken care of. The grounds they cover are so lush and tranquil that walking among them can at times arouse daydreams more bucolic than bohemian.

This is the case with the footpath that leads to the whitewashed caravan home of Ole Lykke, Christiania’s resident historian and self-proclaimed “hippie” and “anarchist,” which opens up onto a green lawn strewn with children’s toys and a tree-strung hammock. Songbirds chitter above in a maple tree, while a pair of bongo players tap pulsating tunes nearby.
Standing here, it’s easy to forget this exists inside a capital city. The unlikely collection of wagons and landed wooden homes that Lykke and his neighbors live in are indeed both urban and rural at once.

“Christiania started out as a squat,” remembers Lykke, sitting atop a sheepskin blanket in his home. “We originally built everything here on our own, including this house; we didn’t ask anybody.”

That do-it-yourself attitude is at the heart of Christiania’s ethos. During the first decades, important decisions of the settlement were made during communal meetings, which were — all parties now ironically agree — more like a free-for-all shouting match.

Rents have risen sharply in Christiania, prompting some people to leave.
Justin Caldern
Much to the ire of inherently anarchist residents, these meetings have since given way to the state-sanctioned foundation and, since 2004, the community has been subjected to the Danish regulations it long tried to escape.
“I needed to ask for a permit just to stand a bicycle in front of my home,” says Jensen. Moreover, all building activities now require permits.
Jensen calls this shift a “war against the hippie generation” devised to set Christianites against one another. Though it “has not worked,” he claims.
“Socially and culturally we are not so much affected,” Lykke attests. “Politically and economically, it’s a totally different situation.” No one from the foundation responded to CNN’s requests for a comment.
Hulder Mader, the Foundation’s secretary, says that the body isn’t involved in controlling what people can do with their homes — that comes under state regulations — although it does set rents based on property size.
“The price to live here is absolutely one of the lowest in the country, but of course you have to pay if you choose to renovate your house or apartment,” she says.
Bicycle parking permits are not a thing, Mader adds. “I know of no individual who is not allowed to place a bicycle outside their house, but I know of a collective who placed a great number of bicycles not outside their house, but on the historic embankment. They were asked to clean up.”
One constant in Christiania has been the uneasy tug-of-war relationship between the police, pushers and Christianites, which Lykke says has stepped up over the past year with law enforcers making regular daily visits.
“Police are here three times a day. They turn up every morning between 9 a.m. to 11 a.m. and have been doing that for one year,” confirms Lykke.

Police raids on illegal drug vendors have become a regular fixture of life in Christiania.
NILS MEILVANG/AFP/Getty Images
Dealers have apparently established a sophisticated surveillance system to evade arrests. When positioned sentries put out a warning call, the pop-up marijuana and hashish stalls collapse and vanish before a single police boot steps onto Pusher Street.
“Police have, on the surface, always hated Christiania, but some of the police love Christiania because they have a training ground that is so unique,” Lykke says with a large smirk. “They get to try out all their new strategies, such as with the drones, which is now a big thing.”
Lykke, who says he’s only been arrested by police once for a traffic violation, recalls an occasion when police took beer away from the local bars, resulting in a scuffle with Christianite business owners and a subsequent large deployment of law enforcers.
“They sent the whole f—ing police school out here with these big plastic shields,” he says. “They were fighting in the streets for five, six hours. The police would then learn to make like the Romans to protect themselves [using their new shields].”
Copenhagen Police Deputy Chief Superintendent Lars-Ole Karlsen tells CNN that it keeps a presence in Christiania to “ensure the continued security and safety of the many residents and visitors to the area.” He says police “conduct a continued and focused action” against organized drug trade with several raids a week targeting drug users, buyers and stocks.
“This is sometimes met with acts of violence targeting police officers,” he adds.
Even with raids and arrests, Christiania could be seen as a case study in Scandinavian tolerance and the Danish way of life idealized by many for its liberal attitudes and features such as hygge — the enjoyment of cozy, simple things.
The fact that Christiania even exists reflects that not everyone is happy with the Nordic welfare state.
Christiania was created as a result of “the release of creative energy that occurred when people who had been patronized and subjected to tight regulation were let loose,” says Per Smidl, who moved into the enclave in 1978, aged 25, after buying a wooden wagon from a drug dealer.
Per Smidl says Christiania’s creation was an act of rebellion.
Justin Calderon
Smidl is author of the novel “Wagon 537 Christiania,” a fictionalized chronicle of his life in the hippie community.
“Contrary to what many may think, the Freetown of Christiania did not come into existence as an expression of a free society, but rather was a rebellion against an authoritarian bureaucracy,” Smidl observes.
“When progressive democratic politicians in the US refer to the Scandinavian welfare states as a source of inspiration, they do not see its flip side: the total control of and emasculation of every living soul,” notes Smidl.
While the spirit of rebellion lives on here, it’s clear things are not what they used to be. Many Christianites — former or current — are now retirees, and the days of joining long-haired rebels in protest and dancing naked under the sun are fading memories.
Lykke has recently had a kneecap replaced, and many Christianites have growing children to care for.
The Christianites that remain may have survived the price rises only to pay the ultimate consequence of trying to build utopia — too many people wanting to visit.
“Tourism is killing Christiania,” says Emmerik Warburg, a 44-year resident of Christiania, who runs the Christiania Researcher in Residence project. “The sheer amount of tourism and not wanting to learn but instead only needing to have a different background for your selfie kills the surroundings.”
No one likes feeling like they are a five-cent spectacle in a zoo, even aging hippies.