by John Timmer: While there are anecdotes aplenty, there’s also some solid science behind the worries… 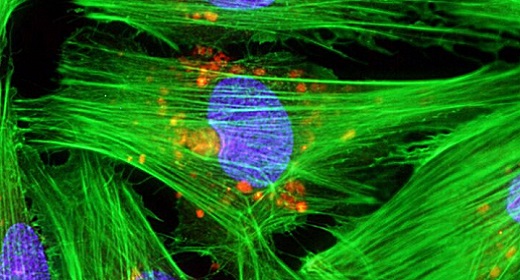 Coronaviruses spread primarily through material released when we breathe, and they cause respiratory symptoms. And SARS-CoV-2, with part of its name coming from “severe acute respiratory syndrome,” didn’t appear to be an exception. But as time went on, additional symptoms became clear—loss of smell, digestive-tract issues—and these weren’t likely to be due to infection of the respiratory tract. And over time, what also became apparent is that the symptoms didn’t necessarily fade when the virus was cleared.

As we’ve studied the virus more, we’ve learned that the protein it uses to latch on to cells is present in a lot of different tissues in the body, suggesting that a wide variety of different effects could be the direct product of infections of the cells there. This week, the effect that seems to be grabbing attention is heart problems, spurred by a Scientific American article that (among other things) considers the stories of professional and college athletes who have been infected. That was followed by a report that roughly 30 percent of college athletes who’ve contracted the virus end up with inflammation of the heart muscle, called myocarditis—a number that ESPN is now saying is an accidental exaggeration.

Both reports are heavy on anecdote, but this is not a new thing; ESPN had reported on myocarditis in college athletes back in early August. And, more significantly, the scientific community has been looking into the issue for months. So far, its conclusion is that there are likely to be heart complications, even in patients who had mild COVID-19 symptoms. But the long-term implications of these problems aren’t yet clear.

Problems for the heart

One of the first indications of a potential problem came all the way back in March, courtesy of researchers in Wuhan who had tracked some of the first COVID-19 patients. In their study, roughly 20 percent of a group of 416 hospitalized patients had some indications of cardiac problems. The researchers used a variety of blood tests to look for proteins that normally reside inside cardiac muscle cells but can be released into the blood when those cells get damaged. (For an example of one of the assays the Wuhan researchers used, see this description of the troponin test that’s commonly used to check for heart problems.)

The researchers only managed to hook 14 of the individuals up to an ECG to check the heart’s electrical activity during the period when these assays were suggesting there could be problems. All 14 of them, however, showed abnormal heart rhythms.

Although suggestive, that was largely where things stood for a number of months. That changed in July, when a German group reported MRI imaging of a cohort of 100 patients who had been diagnosed as having a SARS-CoV-2 infection. The median age of these patients was just 49 years, meaning they were far younger than the group that’s considered to be high risk for COVID-19 complications. And the group had already recovered from the virus (two-thirds without requiring hospitalization), suggesting anything that turned up was due to a lingering problem rather than a direct impact of an ongoing infection.

Yet there were still problems. Seventy-one percent of the patients showed signs of heart problems using the protein test linked above. And MRIs frequently showed problems with the heart tissue itself in 78 percent of them, with inflammation being the most common symptom. None of the problems correlated with time since diagnosis, suggesting that these issues might persist for a while after infections were cleared.

While evidence was building of some cardiac involvement, the reasons for the problem were far less clear. Breathing difficulties could cause the heart to work harder, which could exacerbate any underlying conditions. And COVID-19 appears to involve an inflammatory response, which could involve the heart even without the organ being directly infected. But the fact that younger people with mild symptoms also seemed to be having problems makes these explanations less likely. And a study from late July used heart tissue from autopsies of COVID-19 patients to confirm that the virus was detectable in the heart itself.

But, on its own, this finding is not particularly informative. The heart is a complex organ that relies on a combination of muscle cells, blood vessels to keep them supplied with nutrients and oxygen, and specialized conductive cells that help coordinate the electrical impulses that drive its beating. Problems with any of those could conceivably produce some of the issues seen here.

While details of what the virus might be doing hasn’t yet hit the peer-reviewed literature, there is a draft paper that seems to fill in many of the details. To figure out what cells the virus might infect, the researchers directed stem cells to produce cardiac muscle cells, then exposed those to the virus. These could be infected by the virus, although it’s relatively easy to infect cells in culture dishes.

Still, the researchers identified key signs of the viral infection in these culture cells: alterations in the activity of specific genes, and disruption of some of the muscle structures. They then turned to samples of heart tissue from donors who had died of COVID-19 and used these to show that similar changes had occurred in this heart tissue. Combined, these results indicate that at least some of the issues seen in COVID-19 patients are likely to be the result of the infection of heart muscles by the virus.

So, there’s definitely support for the possibility that some of the athletes mentioned in the recent news reports are seeing a direct impact of COVID-19 on heart function. But without the sort of data seen in these studies, establishing a direct connection is impossible at this point. The studies have identified what to look for using blood tests and MRIs; whether these tests have been done isn’t clear based on public statements.

A lot of follow-up work is needed to understand what’s going on in the heart of COVID-19 patients. We still don’t know when the cardiac symptoms arise, how long they persist, or what factors might make their occurrence more likely. The fact that they exist at all, however, should inform our management of the pandemic. Some suggested approaches involve allowing otherwise healthy, younger people to be put at elevated risk of infection. If cardiac complications occur at the rates seen in some of these studies, that approach could involve unacceptable risks.