by (GreenMedInfo): Think you need to pound the pavement in order to obtain the benefits of exercise? 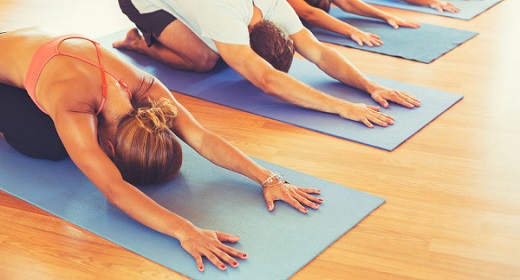 A research article published in the journal Brain Plasticity has revealed that regular yoga practice may impart the same functional benefits to your brain as aerobic fexercise.

The review detailed research led by University of Illinois professor Neha Gothe, in conjunction with Wayne State University professor Jessica Damoiseaux, that summarized the findings of 11 prior studies examining the effects of yoga practice on the structures, function and cerebral blood flow of the brain.

As the health benefits of exercise continue to be validated by science, the virtues of yoga, specifically for the brain, have begun to draw interest from neuroscientists. With periods of focused concentration on the breath and incorporation of meditative practice, yoga is known as a science that engages the mind in ways that other physical fitness activities do not.

Gothe and Damoiseaux sought to understand the effects yoga has on the brain, specifically through assessments done with brain scans performed with MRI, fMRI and SPECT devices.

Is Yoga as Beneficial as Aerobic Exercise?

There is considerable debate as to whether yoga should be classified as an aerobic or anaerobic form of exercise. Anaerobic, meaning without air, pertains to exercise conducted in short, intense bursts, such as weight lifting and stretching. Yoga is generally not considered an aerobic activity, but this can vary depending on the style and intensity of an individual’s practice.

Previous studies on yoga have produced results indicating that yoga may impart similar benefits to the body as aerobic exercise. Gothe’s team set out to understand if benefits may also be comparable regarding yoga’s structural and functional effects on the brain.

In this scientific review, the research team reviewed 11 studies examining the effects of yoga practice on brain structures, regional functioning and cerebral blood flow. The styles of yoga practiced in the studies were Hatha yoga, Kundalini yoga and combined methodologies; what was consistent across the array were that all forms of yoga integrated physical postures, breath control exercises and meditation.

Of the studies reviewed, five involved individuals who were new to yoga and engaged in one or more yoga sessions per week for a period of 10 to 24 weeks. Functional MRIs were done on the brain prior to beginning yoga practice and at the end of the study period, with comparisons of the “before yoga” brain and the “after yoga” brain.

Six studies engaged participants with a regular yoga practice, defined as three or more years of practicing yoga for at least 45 minutes per session, three to four times per week. Their brain health was compared against individuals who were “yoga naïve,” having no yoga or meditation experience, to detect cross-sectional differences between the groups.

None of these cross-sectional studies offered a standardized definition or specific criterion to define a yoga practitioner. Per the review, “[A] yoga practitioner was defined as an individual who had consistently practiced yoga for at least 3 years on a weekly basis.”

Each of these studies used brain-imaging techniques such as MRI, functional MRI or single-photon emission computerized tomography, and all were conducted on older adult populations, with five of the studies having a mean age of greater than 65 years for the subjects.

After analysis was complete, researchers determined that, collectively, the studies demonstrated a positive effect of yoga practice on the structure and/or function of the hippocampus, amygdala, prefrontal cortex, cingulate cortex and brain networks, including the default mode network (DMN).

Specific study findings include greater cortical thickness among female adults over the age of 60 with eight or more years of yoga experience compared to a non-practitioner control group. Additional findings showed that the volume of the left hippocampus was significantly greater among yoga practitioners compared to age- and sex-matched controls with similar “non-yoga” physical activity and fitness levels.

The brain changes observed in what was collectively called “the yoga group” are associated with better cognitive tests scores and improved emotional regulation. While these types of neurological functions are generally associated with age-related decline, this study suggests that yoga may reverse this effect in older female subjects.

According to Gothe, behavioral mind-body interventions such as yoga may be linked to these beneficial anatomical changes in the brain. In a brief released by the News Bureau at University of Illinois at Urbana-Champaign, Gothe stated:

“Many studies looking at the brain effects of aerobic exercise have shown a similar increase in hippocampus size over time. Yoga is not aerobic in nature, so there must be other mechanisms leading to these brain changes.”

While Gothe admitted that, so far, we have not identified what those mechanisms are, she believes that the key to yoga’s positive effects on the brain lies in enhanced emotional regulation. “The practice of yoga helps improve emotional regulation to reduce stress, anxiety and depression and that seems to improve brain functioning.”

This research offers promising early evidence that behavioral interventions like yoga may hold promise to help mitigate age-related and neurodegenerative decline. Gothe and Damoiseaux have called for further research involving larger, longer studies with more direct measurement of changes in the brain and on cognitive performance, as well as standardized approaches that allow for better comparison against other forms of exercise.

Yoga Benefits Your Body and Mind

Yoga is an ancient science of mind-body integration that connects you with your own deeper truths, as well as to your innate wellness. While yoga’s age-defying effects have been confirmed by science, this may not be the practice’s most profound health benefit.

Yoga’s stress-relieving ability may be its most popular virtue, making it an ideal form of exercise for stress-junkies and anyone with a hectic lifestyle. Yoga can also be called upon during uniquely challenging times, such as during menopause or peri-menopause, or when you want to devote additional focus to your mental wellness.

Kundalini yoga, a science that works directly on the central nervous system, has shown promise for treating veterans with PTSD and offers a hopeful natural alternative to often-risky pharmaceutical interventions.