by Amy Woodyatt: Contaminated water that could soon be released into the sea from the Fukushima Daiichi nuclear power plant contains radioactive carbon with the potential to damage human DNA… 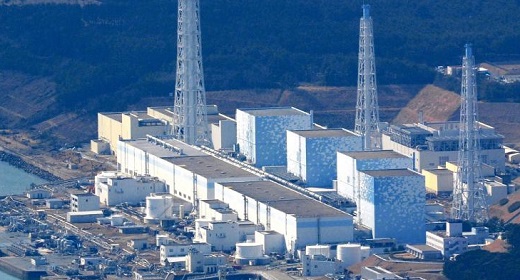 The environmental group claims that the 1.23 million metric tons of water stored at the plant — scene of the 2011 Fukushima Daiichi nuclear disaster — contains “dangerous” levels of the radioactive isotope carbon-14 and other “hazardous” radionuclides, which it says will have “serious long-term consequences for communities and the environment” if the water is released into the Pacific Ocean.
To cool fuel cores at the damaged Fukushima nuclear plant operator Tokyo Electric Power Company (TEPCO) has pumped in tens of thousands of tons of water over the years. Once used, the water is put into storage.
But nine years on from Japan’s worst nuclear disaster, storage space is running out, and the government is still deciding what to do with the water.
Authorities, including the country’s environment minister, have indicated the only solution is to release it into the ocean — a plan facing opposition from environmental campaigners and fishing industry representatives.
On Friday, the Japanese government postponed a decision on what to do with the water. In a task force meeting, Industry Minister Hiroshi Kajiyama said: “In order to avoid the delay in decommission process of Fukushima Daiichi, we need to make a decision how to deal with the processed water that increases every day,” but acknowledged that authorities needed to address “voices of concern.”
In a report released Friday, Greenpeace said the water, in addition to radioactive isotope tritium, contains radioactive isotope carbon-14, which is “major contributor to collective human radiation dose and has the potential to damage human DNA.”
Shaun Burnie, author of the report and senior nuclear specialist with Greenpeace Germany, told CNN there could be as much as 63.6GBq (gigabecquerels) of carbon-14 in total in the tanks.
“These, together with other radionuclides in the water will remain hazardous for thousands of years with the potential to cause genetic damage. It’s one more reason why these plans have to be abandoned,” Burnie said in a statement.
Ryounosuke Takanori, a spokesperson for TEPCO told CNN in a statement that the concentration of carbon-14 contained in the treated water is about 2 to 220 becquerels per liter, as measured in the water tanks.
Takanori said “even if the water is continuously drunk by 2 liters every day, the annual exposure is about 0.001 to 0.11 millisieverts, which is not a level that affects health.”
It is considered that the safety of the health, environment and fishery products in the surrounding area will be ensured by taking measures to firmly comply with legal requirements.
Takanori said TEPCO will carry out a secondary treatment to satisfy regulatory standards “to satisfy the regulatory standards for discharge other than tritium,” and radioactive materials including carbon-14 will be reduced as much as possible.
Claire Corkhill, reader in nuclear materials at the UK’s University of Sheffield, who was not associated with the study, told CNN that tritium has been released into the sea in countries around the world and on numerous occasions, and the procedure has a “low impact on organisms.”
She told CNN that recent TEPCO analysis of the water had shown that the radioactivity in the tanks was “more than was expected,” and indicated the presence of carbon-14 or a beta-emitting radioisotope, technetium-99 — but results have not yet shown how much carbon-14 is in the water.
“Any radioactive discharge carries some environmental and health risk,” Francis Livens, a professor of radiochemistry at the University of Manchester told CNN, adding that the risk would be relative to how much carbon 14 would be released into the ocean. “An awful lot really does depend on how much is going to be discharged.”
“If it’s (carbon-14) there and it’s there in quantity, yes, there probably is a risk associated with it,” Livens, who is not associated with the Greenpeace study, said. “People have discharged carbon-14 into the sea over many years. It all comes down to how much is there, how much is dispersed, does it enter marine food chains and find its way back to people?”
Corkhill said while the Japanese government should be sure of how much carbon-14 is in the tanks before releasing the water into the sea, scientific modeling indicates that the levels of the isotope are within the limits of what the government deems safe.
“The most conservative estimates of how much carbon-14 they have still puts them below the Japanese legal limit for radioactive discharge to sea,” she said.
Disposing of the contaminated water will not be an easy task — though the water could in theory be transported to a different site in the prefecture, or transformed into cement, both alternatives come with their own environmental concerns, Corkhill added. “There’s not really any good solution for this type of material,” she said.
Nonetheless, Corkhill told CNN the contaminated water is becoming a pressing concern: If the Japanese government does not deal with the contaminated water, it will have “several millions of cubic meters of water that’s radioactive all sat on the Fukushima site,” she said.