Want To Improve Wind And Solar Power? Bring Them Together

by Ben Jervey: By combining intermittent renewable energy sources through hybrid projects, developers are taking advantage of the strengths of each… 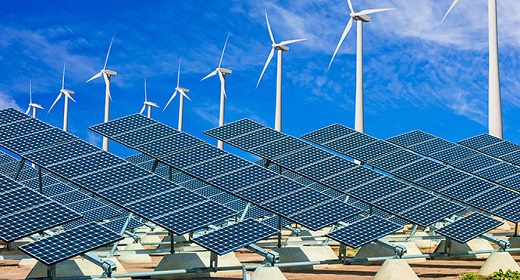 What’s keeping solar and wind power from fully taking over the electric grid? For starters, the sun only shines during the day. Wind blows intermittently, is seasonally variable, and is not always blowing when the energy is needed. But what if solar and wind work together? “Wind resource tends to complement solar resource,” says Sarah Kurtz of the U.S. Department of Energy’s National Renewable Energy Laboratory. “Here in Colorado, for instance, the windiest time is during the winter and spring months. In winter, we don’t have as much sunshine, but we tend to get more wind and stronger wind.”

A handful of enterprising renewable energy developers are now exploring how solar and wind might better work together, developing hybrid solar–wind projects to take advantage of the power-generating strengths of each — with the two technologies in tandem serving as a better replacement for climate-warming fossil fuels than either could be alone.

On the rolling plains just west of Australia’s Great Dividing Range, construction is expected to begin on a 10-megawatt solar farm adjacent to 73 wind turbines that are already online. According to the Australian Renewable Energy Agency — ARENA, a governmental agency tasked with increasing deployment of renewable energy — which has invested A$9.9 million in the project a couple hours’ drive southwest of Sydney, the co-location of solar and wind provides more continuous energy generation than having either technology working alone.

Frischknecht hopes that the Gullen Range project will serve as a model for how tacking solar onto existing wind farms can boost its application. “Scale isn’t as important for competitiveness when plants are co-located, meaning the approach could also unlock new markets for medium-scale solar PV projects,” he says. And just how big could these new markets be? Frischknecht points to an ARENA-funded study that found an estimated 1,000 MW of solar generating potential at existing wind farms in Australia — enough, ARENA calculates, to power 700,000 homes.

“The lessons learned at Gullen Range will be invaluable, as this is the first project of its type in Australia,” Frischknecht says. “It has the potential to cement industry confidence in the approach and provide a blueprint for similar projects to follow.”

Expanding power production and saving money on installation aren’t the only benefits that can come from combining wind and solar. When applied to microgrid systems — local energy grids that can disconnect from the traditional grid and operate autonomously — combined solar and wind can help cut battery costs as well, says NREL’s Kurtz.

According to Kurtz, microgrids are finding application in places like Hawaii and India where utility prices are exorbitantly high or where communities are too remote to be tied into the macrogrid.

Microgrids powered by photovoltaics require battery storage, since people need power when the sun isn’t shining. The problem is, batteries are still quite expensive. Adding wind can help cut the battery costs, since the wind can (and often does) blow when the sun doesn’t shine.

“If you’re in a location where the wind does blow, and especially where the wind complements solar, until the batteries get cheaper than the wind power itself, you’re going to be better off adding wind [than batteries],” Kurtz says.

The microgrid will still need some form of storage, “because there will always be a night when the wind isn’t blowing,” she adds. But the solar and wind combination “can make battery demand much smaller.”

Combining solar photovoltaics and wind turbines at the same location can actually yield up to twice the amount of electricity as having either system working alone.As these types of hybrid systems are just now coming online — ARENA hopes that the Gullen Solar Farm will start producing power in July 2017 — there isn’t yet a lot of empirical data about how well they actually perform. But solar developers have been wary that the shadows cast by wind turbines could potentially stunt the production of solar power.

Research, however, is allaying some of those fears. Simulations conducted in 2013 by the Reiner Lemoine Institut and Solarpraxis AG, both in Germany, showed that shading losses would be as low as 1 to 2 percent on average. They also suggested that combining solar photovoltaics and wind turbines at the same location can actually yield up to twice the amount of electricity as having either system working alone in the same land area. The Gullen Range project, for its part, avoids shading losses altogether by locating the photovoltaics on a northern facing slope beyond the range of any turbines’ shadows.

In Texas, the Defense Logistics Agency of the U.S. Department of Defense is getting around any potential downsides of co-locating the two technologies another way — by taking a more “virtual” approach to hybrid wind and solar. The agency is working with developer Apex Clean Energy to meet 100 percent of Fort Hood’s electricity needs with onsite solar PV panels that are complemented by additional energy wired in from a wind farm in Floyd County, more than 300 miles northwest of the facility. 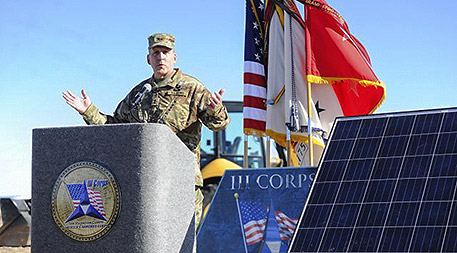 Apex put the solar onsite because the Army wanted the grid security provided by local generation that isn’t vulnerable to power outages and other transmission constraints, Apex director of public affairs Dahvi Wilson explains. But Apex and the Army chose to site the turbines where the wind resource was the strongest. The setup illustrates the point that “[a] hybrid project does not necessary have to be co-located,” Wilson says.

Wilson is enthusiastic about how the projects helps make these renewables make sense from an economic as well as environmental standpoint.

“Wind energy offers the cheapest option for new energy construction currently available in the U.S., while solar energy can be more expensive to develop and install,” Wilson explains. “By combining the costs into one product, the blended cost is competitive with other new sources of energy.”