In the 1980s, Solar Water Heaters Took Off In Israel, But Stalled In The U.S.

by Dina Berenbaum & Manoshi Datta: For Gershon Grossman and Ed Murray, 1978 was a big year… 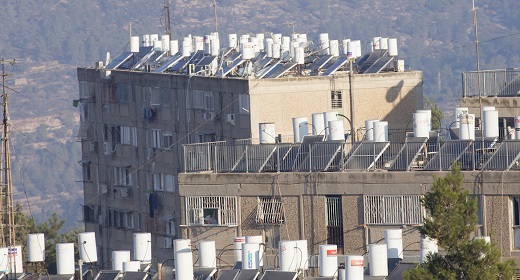 Grossman, then a solar energy pioneer at the Technion, Israel’s premier technological institute, was launching the first International Conference on the Application of Solar Energy. Murray, an idealist attending college, joined an upstart solar heating company in Sacramento, California’s capital, drawn by a prescient concern about climate change and, as he puts it, an impulse to “save the world.”

For both, the excitement was palpable. Solar water heaters were surging into the market, solar thermal energy showed broad potential, and the two were riding the wave.

Four decades later, however, they live in two different worlds. In Israel, 85 percent of households get hot water from a dud shemesh, or “sun boiler.” But in the U.S., despite decades of advocacy by Murray and others, the number of households that have a solar water heater is less than 1 percent. In California, many people don’t even know the technology exists.

America’s solar water heating deficit is often portrayed as a historical accident driven by the vagaries of politics and comparatively cheap fossil fuels. However, interviews with academic and commercial players on the front lines of the solar thermal industry, and a recent in-depth report on the now-expired California Solar Initiative–Thermal (CSI-T) program, suggest that the desire for simple, “magic bullet” solutions to climate change also has played a significant role in relegating this practical technology to the sidelines.

A mandate, an election and two roads diverged

Solar water heaters transfer this heat to water in a holding tank. Other energy sources, such as natural gas or electricity from a power grid, serve as a backup for cloudy days.

By tapping the sun, solar water heaters can reduce a household’s water heating fuel consumption 50 percent to 70 percent. Israel is just one of dozens of countries with a variety of climates where this technology has been deployed. Solid performance and wide applicability have made the technology one of Project Drawdown’s top 50 climate change solutions.

So why did solar thermal technology soar in Israel and sputter in California, setting Grossman and Murray on such different life paths? A pair of political decisions in the 1970s and 1980s had dramatic impact.

In 1976, Israel mandated solar water heaters for all new residential buildings up to eight stories tall.

The Yom Kippur War of 1973 and subsequent oil embargo made energy independence a matter of national security worldwide, but the pinch was particularly painful in countries lacking oil production. For Israel, the threat was existential; as former Israeli prime minister Golda Meir famously quipped, “[Moses] took us 40 years through the desert in order to bring us to the one spot in the Middle East that has no oil.” In 1976, Israel mandated solar water heaters for all new residential buildings up to eight stories tall — a mandate extended to all residential buildings last December.

For Grossman, now a professor emeritus at the Technion and head of the Energy Forum at the Neaman Institute for National Policy Research, mandating solar water heaters made sense environmentally, even beyond Israel’s political agenda. “You just can’t argue with the numbers on how much [energy] you can save using solar water heating instead of electrical heating.”

The U.S. also felt the jolt of the oil embargo and feared running out of domestic oil. Supported by President Jimmy Carter’s 1978 federal tax credits for renewable energy, Americans installed nearly 1 million solar thermal systems by 1990, supplied by more than 200 U.S. manufacturers, including leading corporations such as Grumman Aerospace Corporation and Sears Roebuck.

Renewable solar heats 85 percent of households in Israel, who get hot water from a dud shemesh, or “sun boiler.” In the U.S., it’s a different story. Photo courtesy of Yaniv Hassidof.

However, in contrast to Israel, America’s commitment to renewable energy proved ephemeral. Under President Ronald Reagan, the federal incentives lapsed, dealing the solar thermal industry a body-blow. “We went from 650 companies in California that were installing solar [water heaters] to about 37 overnight,” recalls Murray, currently president and CEO of two California companies dedicated to manufacturing, distributing and installing solar thermal systems, as well as president of the California Solar and Storage Association.

Recent attempts to revive the residential solar water heater industry have had limited success. The CSI-T program, begun in 2010 as a larger push to incentivize solar installations statewide, aimed to add 200,000 systems, but received only 6,237 applications for residential retrofits in 10 years, according to the program’s December report. “I could put a sign over the front door of my office that says ‘free solar water heating,’ and they’d probably still stay away in droves,” Murray says with a wry laugh.

Larger installations for apartment complexes, hotels and universities and home pool heating have helped keep Murray’s solar thermal businesses afloat despite the lack of other residential demand. Ironically, the commercial sector isn’t as robust in Israel because the country’s original mandate only applied to residential properties — a move Grossman views as a significant oversight. Indeed, Grossman believes that an industrial mandate could increase Israel’s renewables usage up to fivefold.

The limiting psychology of renewables

Solar thermal technologies, including solar water heating, provide a direct, thermodynamically efficient and cost-effective method for decarbonizing heating. And for households in mild climates with low electricity bills, “solar water heating can be one of the simplest ways … to use renewable energy and save on energy bills,” says the CSI-T report.

But solar PV has exploded into the global electricity sector, thanks to manufacturing innovations and strong government support. Leveraging economies of scale, the price of solar PV panels has dropped by over an order of magnitude in the past decade. In California, additional boosts came from government-instituted solar feed-in tariffs, cheap financing plans and private-sector investments. And, in a major coup for the industry, California mandated solar PV on new residences up to three stories starting 2020.

This additional friction reduces consumer demand among all but the most motivated consumers, leading to higher marketing costs that drive up the customer’s bottom line. Prices in California are further exacerbated by past industry failures, which have led to strong, self-imposed regulations in the name of consumer satisfaction, says Murray. For example, after many cheaper solar water heating systems froze during the unprecedented 1990 freeze in California, only more expensive systems were allowed through the CSI-T program.

All told, the cost of the average solar water heater sold in California through the CSI-T program was $7,400, compared to less than $1,000 for a fossil fuel alternative. By contrast, a solar water heater in Israel can cost as little as $700.

Going all-in on one technology available to solve the carbon emissions problem satisfies the very human need for ‘magic bullets.’

Today, drumming up excitement for solar thermal remains difficult. According to CSI-T report interviews with solar water heater adopters, “Some interviewees remarked that it seemed tough to get others interested, theorizing that PV was so dominant in neighbors’ minds that solar water heating hardly registered.”

By committing to a specific technology, governments fall prey to a conceptual error that science journalist Ed Yong recently referred to as a “monogamy of solutions.” (Interestingly, he argues this fallacy also shapes the government’s response to COVID-19.) Rather than embracing the growing portfolio of technologies available to solve the carbon emissions problem, going all-in on one satisfies the very human need for “magic bullets.”

Europe’s Green Deal may model such a “portfolio” approach for the rest of the world, according to Bärbel Epp, a German physicist-turned-journalist with nearly two decades of experience studying the global solar thermal market.

Europe’s Green Deal may model such a ‘portfolio’ approach for the rest of the world.

According to Epp, representatives from the European solar thermal market have lobbied the European Commission for over a decade to use solar thermal technologies to decarbonize the heating sector. “It took [the solar thermal industry] I don’t know how many years, at least 10, of just continuously repeating the sentence that heat is 50 percent of our final energy consumption in Europe. … It was hard to lobby in Europe, but it’s now obvious that we have to do something for heat.” Whether these efforts will succeed in providing solar thermal a seat at the table remains to be seen.

Back in Sacramento, Murray is still battling for solar thermal. This year, he’s lobbied the California legislature to extend the state’s recently expired solar thermal subsidy program for one more year, citing COVID-19 as a barrier. The legislature hasn’t budged, but Murray vows he’ll keep going. He may be a lot older than he was in 1978, but the idealism is still alive.